Justices: Partisan gerrymandering none of our business 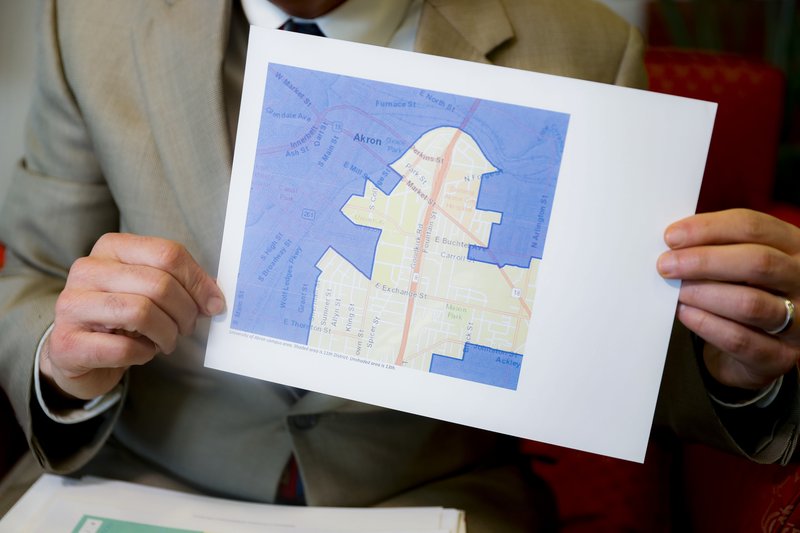 FILE - In this Thursday, April 11, 2019, file photo David Niven, a professor of political science at the University of Cincinnati, holds a map demonstrating a gerrymandered Ohio district in Cincinnati. The Supreme Court said, by a 5-4 vote on Thursday, June 27, 2019, that claims of partisan gerrymandering do not belong in federal court. The court's conservative, Republican-appointed majority says that voters and elected officials should be the arbiters of what is a political dispute The decision effectively reverses the outcome of rulings in Maryland, Michigan, North Carolina and Ohio, where courts had ordered new maps drawn. (AP Photo/John Minchillo, File)

WASHINGTON (AP) — The Supreme Court ruled Thursday that partisan gerrymandering of congressional and legislative districts is none of its business, a decision that leaves state officials free from federal court challenges to their plans to shape districts to blatantly help their parties.

The court’s conservative majority, including the two justices appointed by President Donald Trump, prevailed in a 5-4 ruling that dealt a huge blow to efforts to combat the redrawing of district lines to benefit a particular party.

The decision, on the last day before the justices’ long summer break, has no effect on racial gerrymandering challenges. Courts have barred redistricting aimed at reducing the political representation of racial minorities for a half-century.

The outcome, however, brings an immediate halt to lawsuits that sought to rein in the most partisan districting plans that can result when one party controls a state’s legislature and governor’s office.

In the short term, Republicans are the prime beneficiaries of the ruling. They made dramatic political gains in the 2010 election just before the last round of redistricting, so they have controlled the process in many states. Democratic voters had persuaded lower courts to strike down districting plans in Michigan, North Carolina, Ohio and Wisconsin. The one Republican suit came in Maryland, against a single congressional district.

“The Supreme Court ruling today gives the green light for elected officials to choose their voters, instead of their voters choosing them, through partisan gerrymandering,” U.S. Rep. Ron Kind (D-La Crosse) said. “This decision completely fails to protect our constitution and disenfranchises voters already lacking rights under the Equal Protection Clause. I wholeheartedly disagree with this ruling because it will increase the partisan divide in our country as we move forward.”

Redistricting will next take place in 2021, once 2020 census results are available.

Chief Justice John Roberts wrote the majority opinion in both cases, siding with the liberals on the census and the conservatives on redistricting. Although the chief justice often seeks broader coalitions for relatively narrow decisions, he ended up writing a sweeping redistricting opinion that drew an impassioned dissent from the liberal justices.

Voters and elected officials should be the arbiters of what is a political dispute, Roberts said in his opinion for the court. Federal courts are the wrong place to settle these disputes, he said.

“We have never struck down a partisan gerrymander as unconstitutional_despite various requests over the past 45 years. The expansion of judicial authority would not be into just any area of controversy, but into one of the most intensely partisan aspects of American political life,” Roberts wrote.

The court rejected challenges to Republican-drawn congressional districts in North Carolina and a Democratic district in Maryland.

“Our conclusion does not condone excessive partisan gerrymandering,” Roberts wrote, acknowledging that the North Carolina and Maryland maps are “highly partisan.”

In a dissent for the four liberals, Justice Elena Kagan wrote, “For the first time ever, this court refuses to remedy a constitutional violation because it thinks the task beyond judicial capabilities.” Kagan, in mournful tones, read a summary of her dissent in court to emphasize her disagreement.

Partisan gerrymandering at its most extreme “amounts to ‘rigging elections,’” Kagan wrote, quoting retired Justice Anthony Kennedy in a case from 2004.

The practice allows politicians to “cherry-pick voters to ensure their reelection,” she wrote.

Advances in technology have allowed map-makers to draw districts with increasing precision, and advocates of limiting partisan districting have said the problem will grow even worse in the redistricting that follows the 2020 census.

One party can exaggerate and entrench its power, even in states that are otherwise closely divided between Republicans and Democrats.

Federal courts in five states had concluded that redistricting plans put in place under one party’s control could go too far and that there were ways to identify and manage excessively partisan districts. Those courts included 15 federal judges appointed by Republican and Democratic presidents reaching back to Jimmy Carter.

The decision effectively reverses the outcome of rulings in Maryland, Michigan, North Carolina and Ohio, where courts had ordered new maps drawn, and ends proceedings in Wisconsin, where a retrial was supposed to take place this summer after the Supreme Court last year threw out a decision on procedural grounds.

The court was examining two cases, from Maryland and North Carolina, with strong evidence that elected officials charged with drawing and approving congressional districts acted for maximum partisan advantage.

In North Carolina, Republicans ran the process and sought to preserve a 10-3 split in the congressional delegation in favor of the GOP, even as statewide races are usually closely divided. In Maryland, Democrats controlled redistricting and sought to flip one district that had been represented by a Republican for 20 years.

Both plans succeeded, and lower courts concluded that the districts violated the Constitution.

Kennedy’s retirement from the court last year was a major setback to proponents of limits. He had kept the Supreme Court open to the possibility, though he never voted to strike down a district as too partisan. Justice Brett Kavanaugh, Kennedy’s replacement, was part of Thursday’s majority.

Proponents of limiting partisan gerrymandering still have several routes open. Among those are challenges in state courts, including a pending North Carolina lawsuit. Those court challenges can only work, though, in places that have state constitutional provisions that allow for them.

That’s how state court judges in Pennsylvania struck down Republican-drawn congressional districts and redrew the congressional map in 2018.