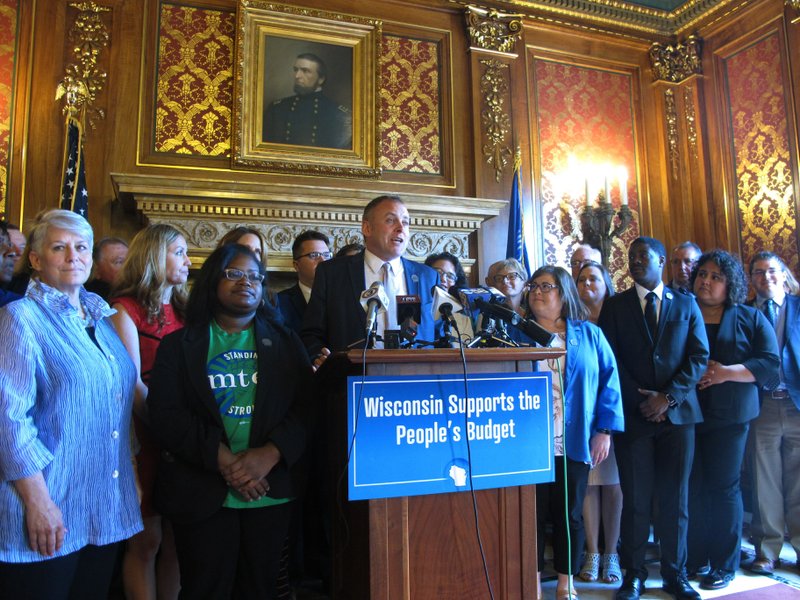 Wisconsin Democratic Assembly Minority Leader Gordon Hintz speaks out against the Republican version of the state budget up for Assembly approval on Tuesday, June 25, 2019, in Madison, Wisconsin. Hintz was joined in the Assembly parlor by fellow Democrats and advocates for Medicaid expansion and other priorities Republicans killed in the budget. (AP Photo/Scott Bauer)

MADISON, Wis. (AP) — Republicans proposed last-minute changes to the state budget on Tuesday to appease skeptical conservatives just hours ahead of the state Assembly vote, saying their plan is fiscally responsible and should be signed into law by Democratic Gov. Tony Evers.

The changes include slightly reducing a property tax increase, giving towns more money for roads, allowing Tesla to sell cars directly to customers in Wisconsin and spending more to increase salaries for prosecutors and hire more across the state.

Evers, and fellow Democrats who don’t have the votes to stop or change the plan, have said that it falls short of what is needed to expand health care access, fix the state’s roads and fully fund education. Evers was reviewing the latest changes but had no immediate comment on his veto plans, said spokeswoman Melissa Baldauff.

The Assembly was to approve the two-year spending plan Tuesday evening, with the Senate following on Wednesday. It would then go to Evers, who has broad power to make changes through partial vetoes. He’s also threatened to take the unprecedented step of vetoing the entire budget forcing lawmakers to start over.

The current budget runs through Sunday, but state government would not shut down if there is a stalemate. Instead, current spending levels would continue until the next two-year budget is enacted, however long that takes.

One of the changes Republicans planned to make was to replace the phrases “may not” and “shall not” with “cannot” throughout the budget, making it more difficult for Evers to reverse the intent of Republicans with a partial veto.

Evers has the power to strike individual words from the budget, which both Republican and Democratic governors have done in the past to undo the will of the Legislature.

Assembly Speaker Robin Vos, speaking to reporters before debate, said Republicans wanted to “veto proof” the budget as much as possible to thwart Evers from dramatically changing the spending plan.

Republican Rep. John Nygren, co-chair of the budget-writing committee, made the case during budget debate for Evers to sign the budget.

“We are in an era of divided government,” Nygren said. “Neither side will get 100% of what they want and yet this budget is good for all Wisconsinites.”

Democratic Assembly Minority Leader Gordon Hintz, speaking before they saw the changes Republicans proposed, said he was waiting to see the final form of the budget before saying what action he thinks Evers should take.

“You don’t have to veto the entire budget but you can still do significant sections of it,” Hintz said. “Maybe that’s the best way.”

Democrats continued to push for items Republicans rejected. Those included expanding Medicaid to cover 82,000 more poor people and leverage $1.6 billion in federal spending for health care; raising gas taxes as a part of a long-term funding solution for roads; and increasing K-12 school aid by $1.4 billion, including $600 million for special education.

Republicans rejected Medicaid expansion, but are still directing about $588 million in new spending for health care needs. They are raising aid to K-12 schools by $500 million and opting for vehicle registration and titling fee increases to pay for roads, rather than a gas tax hike.

Republicans also reduce income taxes by about $450 million. That would cut income taxes on average by $75 per person in 2019 and by $136 in 2020. Evers proposed a higher income tax cut paid for by nearly ending a manufacturing tax credit program that Republicans protected.

The last-minute Republican amendment would reduce a property tax increase on the typical, median-valued home owner by $5 over the next two years. That would make the combined increase on the owner of a roughly $174,000 home $99 over two years, instead of $104, as the budget proposed by both Evers and the budget committee called for.

One item to be added to the budget would allow for electric-car manufacturer Tesla to be able to sell its vehicles directly to customers in Wisconsin. Republican Sen. Chris Kapenga has been pushing for the law change for two years.

Supporters argue that allowing Tesla to open dealerships in the state would give customers more choices and help foster competition in the free market. But opponents say it could put other car manufacturers, who are prohibited from operating their own dealerships, at a disadvantage.