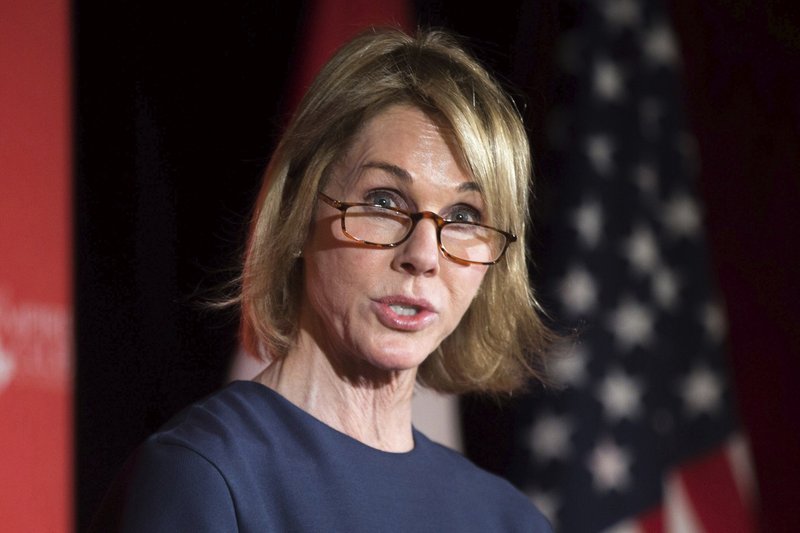 FILE - In this April 4, 2018 file photo, Kelly Knight Craft, U.S. Ambassador to Canada, speaks about NAFTA and Canada-US relations at an Empire Club meeting in Toronto. Craft is President Donald Trump's nominee to be the next U.S. envoy to the United Nations. (Chris Donovan/The Canadian Press via AP)

WASHINGTON (AP) — The email went out from senior Environmental Protection Agency officials to Kelly Craft, the U.S. ambassador to Canada, responding to questions she had about a funding matter.

But the acknowledgment email the EPA got back a few hours later wasn’t from the ambassador. It was from her husband, coal magnate Joseph Craft, a wealthy GOP donor who had simultaneously been taking part in a months-long press by the coal industry for access and regulatory relief from the EPA and the Trump administration in general.

The blurring of roles — and email accounts — by the Crafts this time and others since she began representing the U.S. is raising questions as senators consider her nomination by President Donald Trump. The U.N. post would give her a prime seat at international talks to fight climate change, in part by encouraging limits on the burning of coal, with its heat-trapping emissions.

“Thanks!!” the coal baron replied to the December 2017 email from EPA officials, which had been addressed to “Ambassador Craft.” The agency was following up on a briefing she had gotten from then-EPA head Scott Pruitt on federal funding for cleaning up the Great Lakes, an issue of great interest to Canada.

His response ended with the breezy auto-tag from his cellphone: “Sent from my iPhone powered by coal!”

In a statement on Monday, the State Department said Joseph Craft had been copied in on the EPA response to his ambassador wife after her Great Lakes discussion with Pruitt because he “had played a role in facilitating the exchange.” The statement did not elaborate, or say why his help was needed arranging a discussion between two government officials. “However, he does not play a role in official U.S. government business,” the State Department said.

Kelly Craft has fully complied with her ethics agreement as ambassador to Canada, the statement said.

The Sierra Club obtained the emails under the federal Freedom of Information Act and provided them to The Associated Press.

Virginia Canter, chief ethics counsel at the nonprofit watchdog Citizens for Responsibility and Ethics in Washington, reacted strongly when told Joseph Craft responded to a government email sent to his wife in her capacity as U.S. ambassador.

The topic of the email exchange may not have been sensitive, “but he should not be accessing her official emails under any circumstances,” however he came to reply to it, she said.

“It’s an indication that their interests are intertwined – his business interests and her government interests,” Canter said. She noted the conflict that could raise in the U.N. job, given the international focus on climate change and coal, an objection also raised by Democratic lawmakers and others.

The Sierra Club’s climate policy director, Liz Perera, said in a statement, “It is deeply concerning that a coal executive is receiving and responding to correspondence intended for U.S. diplomats. With Trump, it is impossible to see where the coal industry ends and where the administration starts.”

Spouses of ambassadors typically are closely involved in the social, cultural and ceremonial aspects of a diplomat’s job, reaching out on the soft power aspects of countries’ charm offensives overseas.

But emails and other dealings by the Crafts with Canadian and U.S. officials raise questions about their neutrality and possible overlaps of interest between government representative and coal tycoon, Canter and environmental advocates say.

Kelly Craft’s Twitter account for her post as ambassador to Canada also shows Joseph Craft joining her in meetings with leaders of Canada’s parliament, Kelly Craft meeting at least twice with officials of Canadian utilities and energy companies, and Kelly Craft socializing at a University of Kentucky basketball game with Pruitt. Her husband at the time was contacting Pruitt and the EPA repeatedly as the U.S. coal industry pressed a successful campaign for regulatory rollbacks from the Trump administration.

Two months after the exchange over the Great Lakes, Joseph Craft wrote Pruitt’s aides from his same email account to ask Pruitt to come speak to his company’s board and to a coal investment forum.

At a hearing last week, Kelly Craft told members of the Senate Foreign Relations Committee she would recuse herself from U.N. matters dealing with coal and other fossil fuels, given her husband’s coal interests.

Not good enough, complained Sen. Edward Markey, a Massachusetts Democrat on the panel.

“It is lamentable that as the world faces an existential crisis in climate the Trump administration has nominated someone who is so clearly conflicted in her financial interests,” he said in a statement afterward.

Kelly Craft drew attention in 2017 when she told reporters in Canada there were “good scientists on both sides” of the climate change debate. The Trump administration has dismissed repeated warnings from government and other scientists about devastating effects of climate change from fossil fuel emissions.

She has said since her U.N. nomination she accepts that humans and their burning of oil, gas and coal play a role in climate change.

“Let there be no doubt: I take this matter seriously, and if confirmed, I will be an advocate for all countries to do their part in addressing climate change,” she testified last week.

Trump before and after taking office declared it his mission to save the declining U.S. coal industry and promote fossil fuels in general. He has acted to take the U.S. out of the Paris climate-change accord – a major topic for the country’s next U.N. ambassador – and intervened against several Obama-era measures that aimed to rein in coal emissions.

Records obtained under the federal Freedom of Information Act show Joseph Craft repeatedly emailing, texting and meeting with Pruitt and other EPA officials as coal companies have pressed for relief from the government as competition from cheaper natural gas and from renewables has driven down U.S. demand for coal.