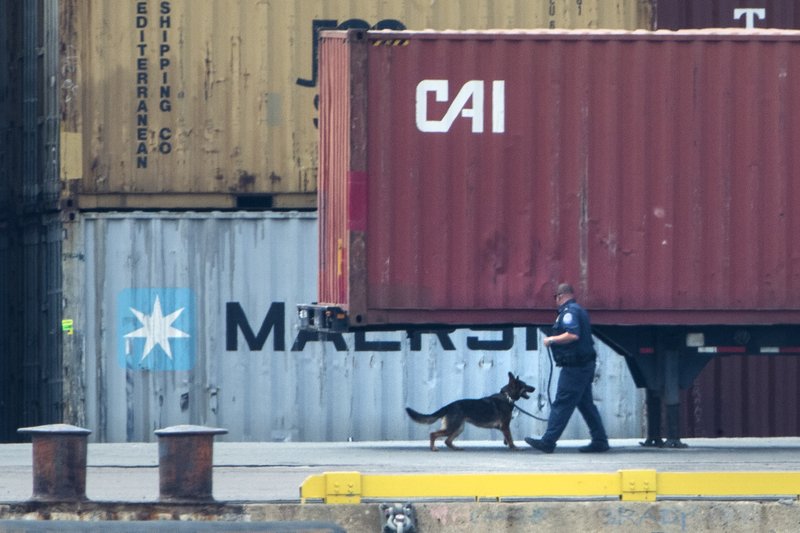 An officer with a dog inspects a container along the Delaware River in Philadelphia, Tuesday, June 18, 2019. U.S. authorities have seized more than $1 billion worth of cocaine from a ship at a Philadelphia port, calling it one of the largest drug busts in American history. The U.S. attorney’s office in Philadelphia announced the massive bust on Twitter on Tuesday afternoon. Officials said agents seized about 16.5 tons (15 metric tons) of cocaine from a large ship at the Packer Marine Terminal. (AP Photo/Matt Rourke)

PHILADELPHIA (AP) — U.S. authorities seized 33,000 pounds, or 15,000 kilograms, of cocaine from a ship at Philadelphia’s port in what they described as one of the largest drug busts in American history.

They said the haul could have been worth more than $1 billion on the street.

The U.S. attorney’s office in Philadelphia announced the massive bust on Twitter on Tuesday afternoon, saying that law enforcement agents found the cocaine on a ship at the Packer Marine Terminal. Two members of the crew were arrested and face federal charges.

Agents with dogs swarmed the colossal ship Tuesday afternoon, including one officer who could be seen climbing into the back of a large red container on wheels. Court documents said the bust began Monday.

An affidavit alleged that crew members helped load the cocaine onto the MSC Gayane while it was at sea off the west coast of South America. Citing an interview with one of the crew members, authorities said a total of 14 boats approached the vessel on two separate occasions during its voyage. Several crew members allegedly helped transfer bales of cocaine.

The ship’s second mate, Ivan Durasevic, and another crew member, Fonofaavae Tiasage, were charged with conspiracy to possess cocaine aboard a ship. An online court docket did not list attorneys for the defendants. It wasn’t clear whether other crew members would face charges.

U.S. authorities seized more than $1 billion worth of cocaine Tuesday from a ship at a Philadelphia port, calling it one of the largest drug busts in American history. (June 18)
The drug seizure is the latest in a series of large cocaine busts along the East Coast. In a March bust in Philadelphia, drug dogs sniffed out 1,185 pounds (538 kilograms) of cocaine worth about $38 million — at that time the city’s largest seizure of the drug in more than two decades.

In February, customs agents seized 3,200 pounds (1,451 kilograms) at the Port of New York and New Jersey with a street value estimated at $77 million. That was the largest cocaine bust at the ports since 1994.

Online ship trackers said the vessel detained in Philadelphia sails under the flag of Liberia and arrived in Philadelphia after 5 a.m. Monday. The ship’s previous ports of call were the Bahamas on June 13, Panama on June 9, Peru on May 24 and Colombia on May 19, records show.

Federal authorities say Colombia is the primary supplier of cocaine to the U.S.

The MSC Gayane’s owner, MSC Mediterranean Shipping Co., said in a statement it was “aware of reports of an incident at the Port of Philadelphia in which U.S. authorities made a seizure of illicit cargo.” The privately owned Swiss shipping company said it “takes this matter very seriously and is grateful to the authorities for identifying any suspected abuse of its services.”

Patrick Trainor, a spokesman for the U.S. Drug Enforcement Administration in Philadelphia, said that based on current prices in the area, the street value of the haul is around $525 million to well over $1 billion.