Trump shifts to talk of Air Force One 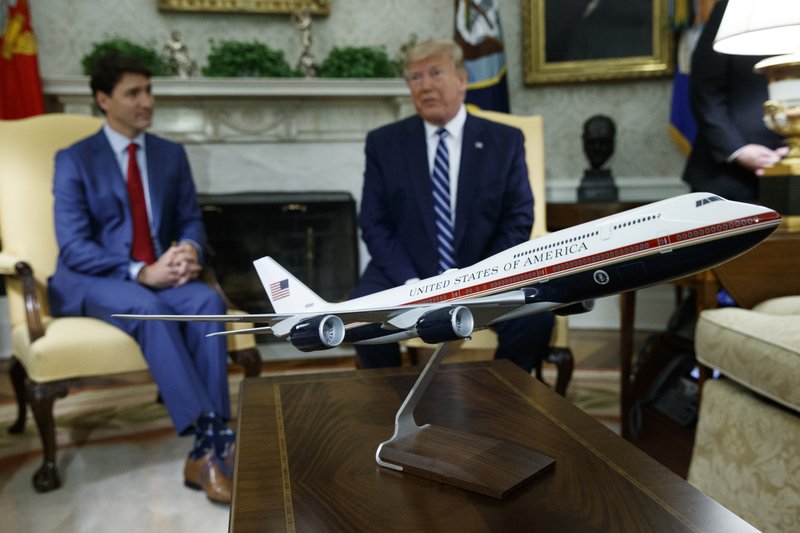 In this June 20, 2019, photo, a model of the new Air Force One design sits on a table during a meeting between President Donald Trump and Canadian Prime Minister Justin Trudeau in the Oval Office of the White House in Washington. (AP Photo/Evan Vucci)

WASHINGTON (AP) — When President Donald Trump and Canada’s prime minister sat down in the Oval Office to discuss trade, Iran and other pressing matters, a model airplane dominated the coffee table in front of them.

Before Trump would answer reporters’ questions about Iran’s downing of a U.S. drone on Thursday, he made an aeronautical detour.

“This is the new Air Force One,” he offered, explaining that the model represents an updated version of the presidential airplane that will cost taxpayers less money and offer more new features than originally planned, thanks to his intervention. “It’s going to be terrific,” he added.

Long fascinated by airplanes, Trump has always fancied himself as something of an aviation expert. He’s intent on putting his stamp on the next version of the decades-old modified Boeing 747s that only the president gets to fly — right down to the paint job.

Trump once owned the now-defunct, New York-based Trump Shuttle in the late 1980s and early 1990s, and he took great pride during the 2016 presidential race in using his personal plane, a Boeing 757 with Rolls-Royce engines and gold fixtures, to whisk him to campaign events and back to his New York penthouse. He recently advised Boeing to fix and “REBRAND” its troubled 737 Max jetliners with a new name after the planes were grounded worldwide following deadly crashes in Ethiopia and Indonesia.

So fond was Trump of his personal plane that he mused about continuing to use it after he took office, which was not a realistic option for security and other reasons.

His affection shifted to Air Force One, perhaps the biggest perk of being president, but he had no affection for the plane’s iconic, Kennedy-era blue and white design that is known the world over. Trump views the color scheme as dated, too muted and insufficiently patriotic, according to several current and former White House and campaign advisers.

“The baby blue doesn’t fit with us,” he told Fox News last week after earlier unveiling sketches of his ideal redesign for the plane’s exterior.

Using the colors of the American flag, the top half of the plane would be white while dark blue would cover the bottom half, including the belly. A bold red stripe would streak from cockpit to tail across the midsection — almost identical to the color scheme on Trump’s personal plane, except that the white and blue are reversed.

Trump acknowledged the iconic nature of the existing Air Force One design, but said it has been around a long time.

“I like the concept of red, white and blue and the classic, and I think it’s going to look much better actually,” he told Fox News.

Trump’s proposed design is far from a done deal — Democratic lawmakers want congressional approval of a new Air Force One paint job. The House Armed Services Committee recently voted along party lines to add such a provision to the annual defense policy bill. The amendment still must make it into the final version of the legislation that Congress sends to Trump.

“This plane’s going to be around for the next 20, 30 years, so let’s keep that in mind, and if someone wants to change its appearance, its scheme, then we ought to have a say about it,” said Rep. John Garamendi, D-Calif., a committee member. “Personally, I think we ought to stay with what we have.”

Others questioned Trump’s color choices, especially a darker blue for the belly over the lighter blue on the plane that took Trump to Florida and back this week.

Alex Major, co-head of the McCarter & English government contracts practice and a retired Air Force intelligence officer, said a darker belly would not be “visually benign” and could make it easier to detect Air Force One in the sky.

“When you have a light blue belly, it’s there for a reason,” Major said.

Before taking office and as his transition teams and inaugural committee labored over new hires and details of the swearing-in, Trump tweeted in December 2016 that costs for the Air Force One program were “out of control, more than $4 billion.” He added, “Cancel order!”

White House press secretary Sarah Sanders later said the Air Force had awarded Chicago-based Boeing Co. a $3.9 billion contract for two presidential planes due in 2024, the final year of a possible Trump second term. The price tag represented a savings of $1.4 billion over an initial contract proposal, she said.

Boeing said its livery experts helped the White House Military Office with the design scheme. Air Force spokeswoman Ann Stefanek confirmed that red, white and blue livery options are being considered. She noted that it will be “several years” before either of the two new Air Force Ones are painted in the chosen paint scheme.

Trump has grown fond of using Air Force One as a campaign rally backdrop, and he often summons aides to watch live coverage, usually on Fox News, as it descends into international airports.

According to Boeing history, first lady Jacqueline Kennedy picked new colors for the plane used by her husband, President John F. Kennedy. A swath of baby blue covers the nose and sweeps back along each side of the fuselage. The lettering was changed to a font inspired by the heading of the Declaration of Independence.

The livery was the work of French-born industrial designer Raymond Loewy, whose previous clients included Lucky Strike cigarettes and Studebaker cars. He wrote that President Kennedy picked the blue paint scheme over a red one. Some accounts said he rejected the Air Force’s red and gold theme because it looked too imperial.