US: Iran should still comply with nuke deal Trump derided 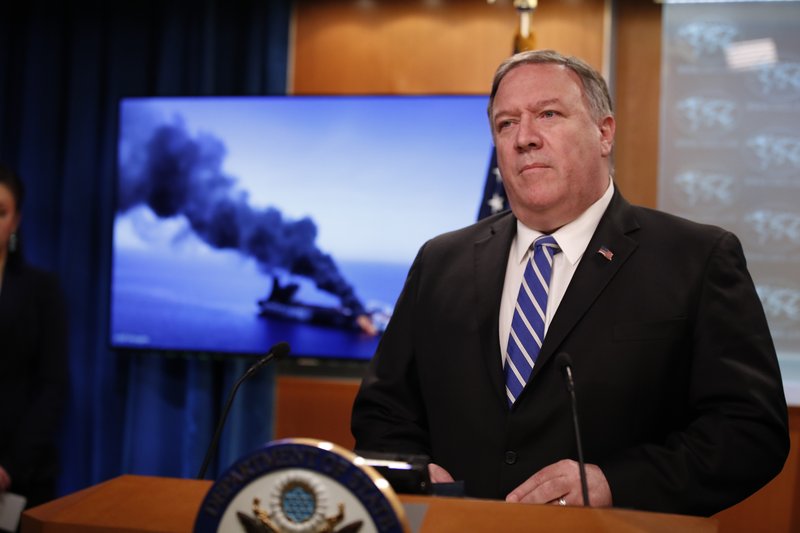 WASHINGTON (AP) — The Trump administration found itself in the awkward position Monday of demanding that Iran comply with a nuclear accord that the president has derided as the worst deal in history.

Iran announced Monday it would break a limit on uranium stockpiles established by a 2015 agreement with world powers that was intended to restrict the Islamic Republic’s nuclear program in exchange for an easing of international sanctions.

President Donald Trump withdrew from the agreement, signed by his predecessor, and reinstated punishing economic sanctions, resulting in sharply rising tensions that deteriorated further with the Iranian warning that it could soon start to enrich uranium to just a step away from weapons-grade levels.

That put the State Department in the position of defending the limits set by the 2015 deal that was so maligned by Trump and his national security team.

“We continue to call on the Iranian regime not to obtain a nuclear weapon, to abide by their commitments to the international community,” State Department spokeswoman Morgan Ortagus told reporters.

The Iranian announcement seemed likely to further inflame Mideast tensions as the U.S. was working with allies on a response to attacks on two oil tankers near the Persian Gulf that Secretary of State Mike Pompeo said was carried out by Iranian forces.

The State Department spokeswoman said Iran’s uranium announcement amounted to “extortion” and a “challenge to international norms,” as well as to the 2015 agreement known formally as the Joint Comprehensive Plan of Action.

“It’s unfortunate that they have made this announcement today,” Ortagus said. “It doesn’t surprise anybody and this is why the president has often said that the JCPOA needs to be replaced with a better deal.”

Trump appeared to say the JCPOA should not be violated in a tweet that said “Iran to defy Uranium Stockpile Limits.”

Supporters of the deal, meanwhile, blamed the administration for Iran’s provocative announcements, saying they were entirely predictable given the renewed U.S. pressure.

“While Iran’s frustration with Trump’s reckless and irresponsible pressure campaign is understandable, we strongly urge Iran to remain in compliance with the nuclear deal,” the Arms Control Association said in a statement. “It remains in Iran’s interests to abide by the limits of the agreement and to fully cooperate with the International Atomic Energy Agency’s more intrusive monitoring and verification.”

Iran has shown no willingness to negotiate another deal and vowed not enter into talks while the United States while the administration maintains its “maximum pressure” campaign of sanctions.

Administration officials found themselves Monday grappling with whether to urge the remaining parties to the deal, including Britain, France and Germany, to demand that Iran stay in compliance. They must also consider if such a stance would essentially concede that the restrictions imposed during the Obama administration, while short of ideal, are better than none.

Under the deal, Iran can keep a stockpile of no more than 660 pounds (300 kilograms) of low-enriched uranium. Behrouz Kamalvandi, the spokesman for Iran’s atomic agency said it would pass that limit on Thursday, June 27.

A senior U.S. official said the administration is most concerned about any violation of the deal that would reduce the breakout time that Iran would need to produce a nuclear weapon. The deal aimed to keep the breakout time at one year.

The official said certain violations, while they should be not accepted, would not necessarily reduce that time. But other violations, including enriching uranium to 20% should be addressed immediately if they occur, the official said. The official was not authorized to discuss the matter publicly and spoke on condition of anonymity.

The official said it would be up to the Europeans to decide if Iran was in violation of the deal and whether to initiate a dispute resolution mechanism that could bring the Iranians back into compliance. Secretary of State Mike Pompeo is expected to meet this week with E.U. foreign policy chief Federica Mogherini, a leading deal proponent, at which this issue is likely to be raised.

Pompeo, who was a leading critic of the deal while he was in Congress, has said in the past that Iranian compliance is not really an issue as the administration sees the agreement as fundamentally flawed because over time it eases many limits on Iran’s nuclear activities.

Yet, just last week, the U.S. ambassador to the U.N.’s nuclear watchdog accused Iran of violating a provision of the deal that relates to advanced centrifuges and called on the Europeans to ensure that Iran remains in compliance.