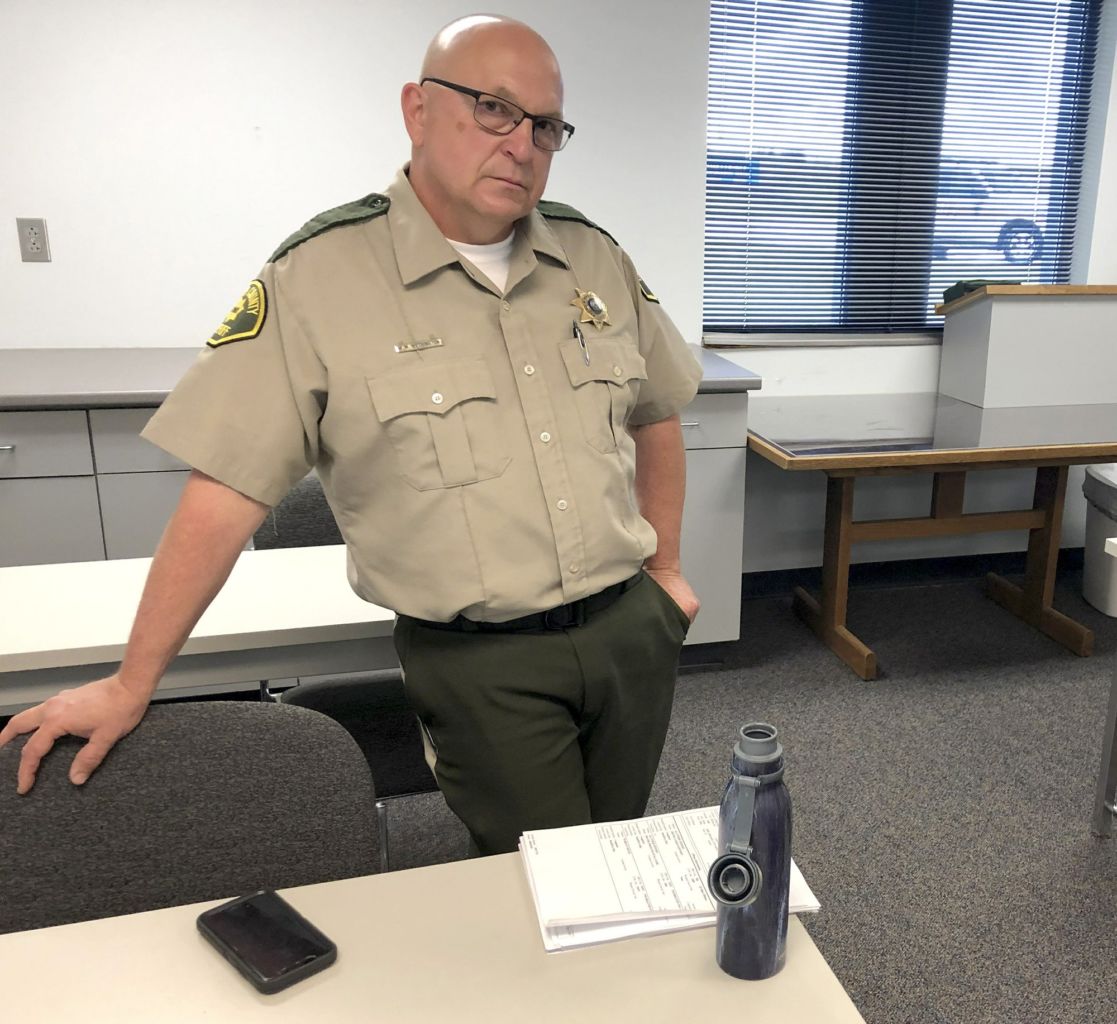 In this Wednesday, June 12, 2019 photo Cedar County, Iowa Sheriff Warren Wethington poses for a portrait at his office in Tipton, Iowa. Wethington has declared that his jail will not book any inmates arrested by police officers in the town of Durant, saying he cannot vouch for the officers' integrity. Wethington issued the directive last month, which applies to anyone arrested by the Durant Police Department. Wethington says one of Durant's three officers has a history of being untruthful and using questionable force and the chief knows this but hired him anyway. (AP Photo/Ryan J. Foley)

DURANT, Iowa (AP) — An unusual circumstance let a speeding drunken driver avoid a trip to jail after her recent arrest in this small eastern Iowa town: the sheriff isn’t honoring arrests made in Durant.

Saying he cannot rely on the truthfulness of officers in the farming community of 1,800 people about 165 miles (265 kilometers) east of Des Moines, Cedar County Sheriff Warren Wethington has declared that his jail will not book any suspects whom they arrest for the foreseeable future. He has barred Durant officers from setting foot in the county law enforcement center and ordered his own deputies to not base any arrests on the observations of Durant officers.

Wethington’s directive, issued last month, has won him praise from residents, who see it as a rare public stand against police misconduct by a law enforcement official. But it has escalated his long-running feud with Dawn Smith, chairwoman of the Cedar County Board of Supervisors, whose husband, Robert Smith, is the Durant officer at the center of the sheriff’s allegations.

Wethington said the main problem is that Robert Smith, one of the town’s three full-time officers, has a history of being untruthful, using questionable force and generating complaints about his harsh demeanor. And Durant’s police chief, he says, is aware of the problems but hired Smith anyway last year even though some of them have to be disclosed to criminal defendants.

“I’m not saying they can’t do their jobs. I’m just saying that I’m not going to vouch for their integrity,” Wethington said in an interview at the sheriff’s office in the county seat of Tipton, population 3,200, which is 150 miles (241 kilometers) east of Des Moines. “When you allow somebody to bring a suspect to your jail, you are saying ‘I believe this officer is credible and that there is probable cause this happened.’ That’s not the case here.”

Robert Smith retired from the Iowa State Patrol last year after a 30-year career and then was hired by Durant, where his wife previously served as mayor and one of her supporters is the police chief. Dawn and Robert Smith said that he left the patrol in good standing; a patrol spokesman had no immediate comment.

But court records show that the Cedar County prosecutor’s office routinely discloses to criminal defendants that Smith’s truthfulness as a witness may be called into question by issues that surfaced during his job as a trooper. Such disclosures are referred to as Giglio notices because they are required under a Supreme Court decision by that name and can be a career-ender for officers subjected to them.

Records detailing Robert Smith’s past issues are maintained in a sealed file at the courthouse that defense lawyers and judges have been allowed to review in-person.

Robert Smith declined comment on the contents of the file but said, “My record stands by itself and that’s all I have to say.” Durant Police Chief Orville Randolph declined comment, citing the advice of the city attorney.

Dawn Smith called the sheriff’s move an attempt to get back at her after the two elected officials have clashed on other issues. She said Wethington “chose to target me, my family, my friends and my community” after she looked into his admitted unprofessional behavior at a May 1 meeting of the county’s 911 board, which he chairs.

Wethington acknowledged that he used foul language and was “downright mean” to vendors of the county’s radio system because he was outraged their equipment isn’t working and he demanded answers. However, he says Dawn Smith has made an issue of the meeting only to try to discredit him after she caught wind of his plan. He said their feud “makes it easy” to speak out against Durant officers but that’s not why he’s doing it.

Randolph, the Durant chief, said his department is continuing business as usual amid the situation. But it is having a real-world impact.

A 43-year-old woman was charged with operating while intoxicated last month after she was pulled over for speeding 24 miles per hour over the limit in Durant and had a blood alcohol level over the limit. A criminal complaint says she was released with a date to appear in court rather than jailed because the “Cedar County Sheriff refused to take defendant.”

Calling the situation unfortunate, the chief judge of the judicial district has ordered that people who are arrested in the Cedar County part of Durant can be taken to the Scott County jail in Davenport. If that jail is full, they are to be taken to the Muscatine County jail. Durant, despite its small population, stretches into all three counties.

After they make court appearances, the suspects can then be ordered sent back to the Cedar County jail in Tipton pending further proceedings.

Wethington says that he’s willing to accept the inmates at that point since their charges have been reviewed by the court — even though it means an 85-mile roundtrip for one of his deputies to pick them up. In addition to the transportation costs, the arrangement could mean additional hearings for the judges and clerks in Scott County.

The sheriff said the response has been “overwhelmingly good” despite those costs, pointing to social media posts cheering him on.

“I even got an ‘I Stand With Warren’ hashtag,” he said with a laugh.