US says Iran took mine off tanker; Iran denies involvement 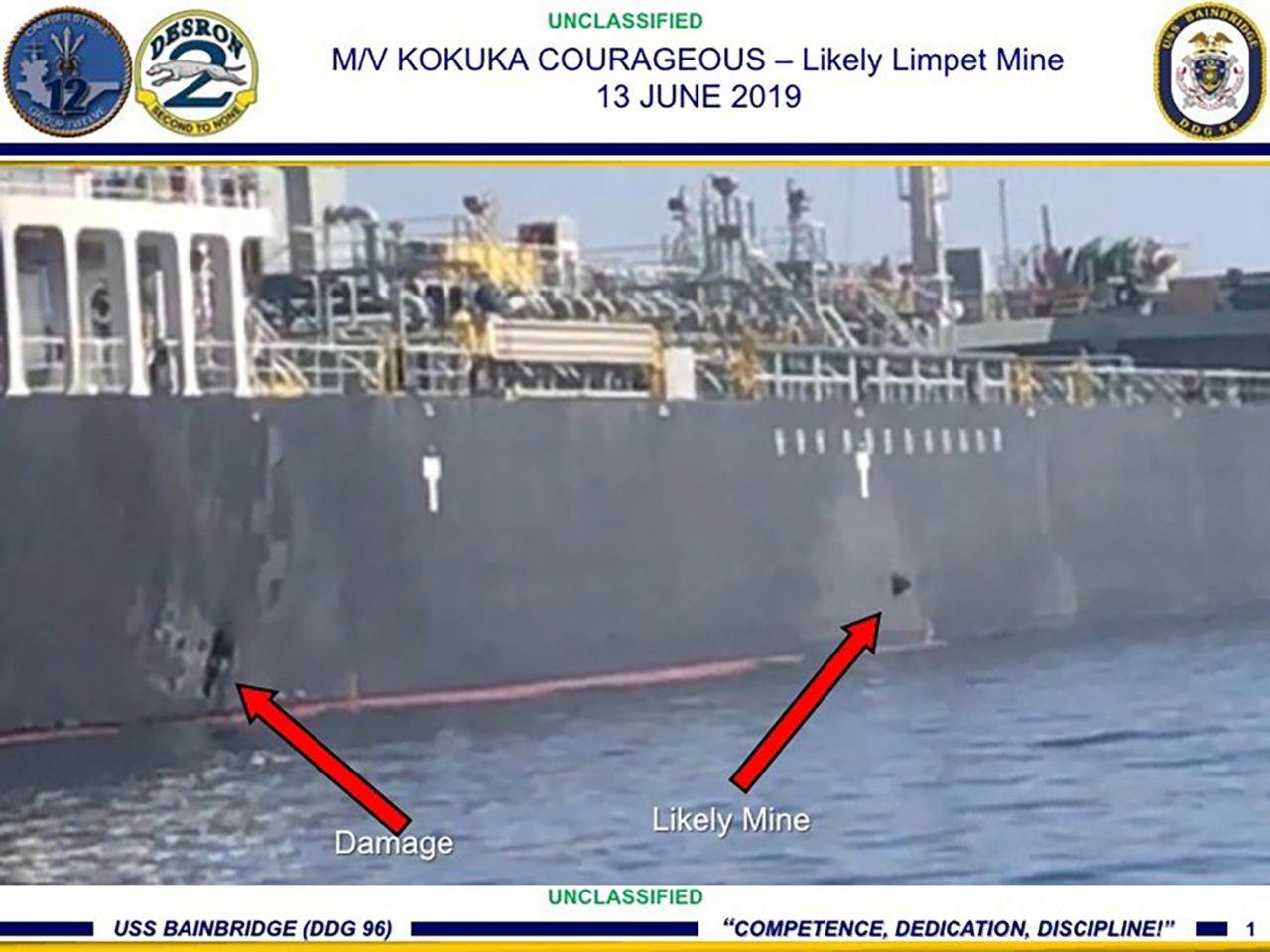 This June 13, 2019, image released by the U.S. military's Central Command, shows damage and a suspected mine on the Kokuka Courageous in the Gulf of Oman near the coast of Iran. The U.S. military on Friday, June 14, 2019, released a video it said showed Iran's Revolutionary Guard removing an unexploded limpet mine from one of the oil tankers targeted near the Strait of Hormuz, suggesting the Islamic Republic sought to remove evidence of its involvement from the scene. (U.S. Central Command via AP)

DUBAI, United Arab Emirates (AP) — The U.S. military on Friday released a video it said shows Iran’s Revolutionary Guard removing an unexploded limpet mine from one of the oil tankers targeted near the Strait of Hormuz, suggesting the Islamic Republic sought to remove evidence of its involvement from the scene. Iran denies being involved, accusing the U.S. instead of waging an “Iranophobic campaign” against it.

The U.S. Navy rushed to assist the stricken vessels in the Gulf of Oman, off the coast of Iran, including one that was set ablaze Thursday by an explosion.

The ships’ operators offered no immediate explanation on who or what caused the damage against the Norwegian-owned MT Front Altair and the Japanese-owned Kokuka Courageous. Each was loaded with petroleum products, and the Front Altair burned for hours, sending up a column of thick, black smoke.

While Iran has denied being involved in the attack, Tehran previously used mines against oil tankers in 1987 and 1988 in the “Tanker War,” when the U.S. Navy escorted ships through the region.

The black-and-white footage, as well as still photographs released by the U.S. military’s Central Command on Friday, appeared to show the limpet mine on the Kokuka Courageous.

A Revolutionary Guard patrol boat pulled alongside the ship and removed the mine, Central Command spokesman Capt. Bill Urban said.

“The U.S. and the international community stand ready to defend our interests, including the freedom of navigation,” Urban said. “The United States has no interest in engaging in a new conflict in the Middle East. However, we will defend our interests.”

Iran earlier denied involvement via a statement from its mission to the United Nations.

“The U.S. economic war and terrorism against the Iranian people as well as its massive military presence in the region have been and continue to be the main sources of insecurity and instability in the wider Persian Gulf region and the most significant threat to its peace and security,” the statement said.

Meanwhile in Tokyo, the owner of the Kokuka Courageous said its sailors saw “flying objects” before the attack, suggesting it wasn’t damaged by mines. Company president Yutaka Katada offered no evidence for his claim, which contradicts the U.S. military account.

Katada also said crew members saw an Iranian naval ship nearby, but did not specify whether this was before or after the attacks.

The suspected attacks occurred at dawn Thursday about 40 kilometers (25 miles) off the southern coast of Iran. The Front Altair, loaded with the flammable hydrocarbon mixture naphtha from the United Arab Emirates, radioed for help as it caught fire. A short time later, the Kokuka Courageous, loaded with methanol from Saudi Arabia and Qatar, also called for help.

The U.S. Navy sent a destroyer, the USS Bainbridge, to assist, said Cmdr. Joshua Frey, a 5th Fleet spokesman. He described the ships as being hit in a “reported attack,” without elaborating.

Thursday’s attack resembled that of an attack in May targeting four oil tankers off the nearby Emirati port of Fujairah. U.S. officials similarly accused Iran of targeting the ships with limpet mines, which are magnetic and attach to the hulls of a ship. The mines disable, but don’t sink, a vessel.

U.S. Secretary of State Mike Pompeo told journalists on Thursday that the U.S. assessment of Iran’s involvement was based in part on intelligence, as well as the expertise needed for the operation. It was also based on recent incidents in the region, which the U.S. also blamed on Iran, including the use of limpet mines in the Fujairah attack, he said. He also tied Iran to a drone attack by Yemen’s Iranian-backed Houthi rebels on a crucial Saudi oil pipeline around the same time.

“Taken as a whole, these unprovoked attacks present a clear threat to international peace and security, a blatant assault on the freedom of navigation and an unacceptable campaign of escalating tension by Iran,” Pompeo said. He didn’t elaborate and took no questions.

Iran denied being involved in the attacks last month and its foreign minister questioned the timing of Thursday’s incidents, given that Japanese Prime Minister Shinzo Abe was meeting Supreme Leader Ayatollah Ali Khamenei in Tehran.

Pompeo noted that Abe had asked Iran to enter into talks with Washington but Tehran “rejected” the overture.

“The supreme leader’s government then insulted Japan by attacking a Japanese-owned oil tanker just outside Iranian waters, threatening the lives of the entire crew, creating a maritime emergency,” Pompeo added.

At the United Nations, the Security Council held closed consultations on the tanker incidents late Thursday at the request of the United States but took no action.

Tensions have escalated in the Mideast as Iran appears poised to break the 2015 nuclear deal with world powers, an accord that President Donald Trump repudiated last year. In the deal, Tehran agreed to limit its enrichment of uranium in exchange for the lifting of crippling sanctions. Now, Iran is threatening to resume enriching uranium closer to weapons-grade levels if European nations don’t offer it new terms to the deal by July 7.

Already, Iran says it quadrupled its production of low-enriched uranium. Meanwhile, U.S. sanctions have cut off opportunities for Iran to trade its excess uranium and heavy water abroad, putting Tehran on course to violate terms of the nuclear deal regardless.