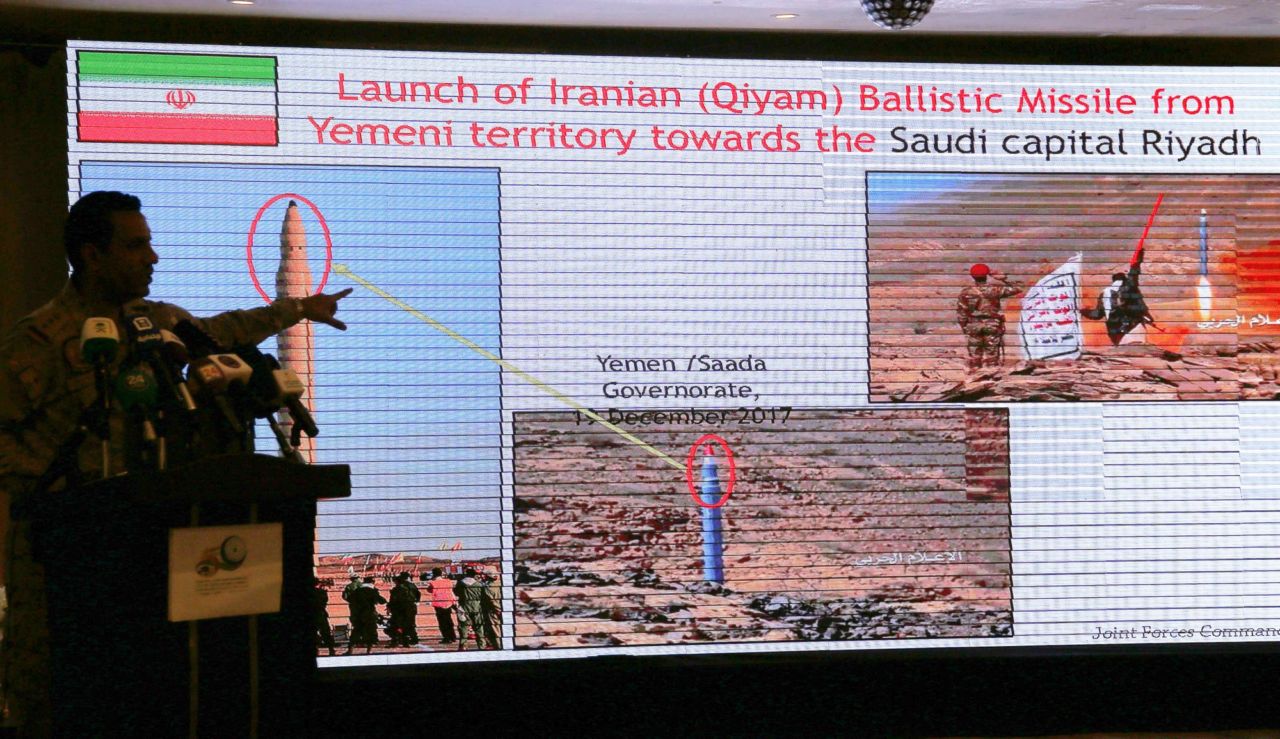 Col. Turki al-Malki, spokesman for the Saudi-led coalition fighting Huthi forces, points to a screen showing what he said was evidence of Iranian intervention and support to the Huthi in Yemen during a news conference in Mecca, Saudi Arabia, on Friday, May 31, 2019. (AP Photo/Amr Nabil)

WASHINGTON (AP) — Opposition to President Donald Trump’s Saudi Arabia policy and use of executive power is building in Congress, where senators have introduced more legislation aimed at blocking the sale of weapons to the kingdom.

Sen. Chris Murphy of Connecticut, a Democrat, and Sen. Todd Young of Indiana, a Republican, said in a statement Sunday they hope to force a vote on U.S. security assistance to Saudi Arabia, including arms sales, after a review of the kingdom’s human rights record.

Anger has been mounting in Congress for months over the Trump administration’s close ties to the Saudis, fueled by high civilian casualties in the Saudi-led war in Yemen — a military campaign the U.S. is assisting — and the killing of U.S.-based columnist Jamal Khashoggi by Saudi agents. Tensions were further inflamed when Trump used an emergency declaration in May to sell the kingdom weapons that Congress had previously placed on hold.

The bill the senators are introducing Monday draws on a provision in the Foreign Assistance Act that allows for congressional review. The act allows Congress to vote to request information about a country’s human rights practices. After receiving the information, Congress can then vote on ending or restricting security assistance.

“Congress needs to change how we do business with the Kingdom. The process we are setting in motion will allow Congress to weigh in on the totality of our security relationship with Saudi Arabia, not just one arms sale, and restore Congress’s role in foreign policy making,” Murphy said in a statement.

This move follows the introduction of 22 bipartisan resolutions on Wednesday that aim to block the $8.1 billion arms sale to Saudi Arabia and the United Arab Emirates that bypassed congressional review last month.

“Our arms sales to Saudi Arabia demand Congressional oversight. This bipartisan resolution simply asks the Secretary of State to report on some basic questions before moving forward with them,” said Young, who like Murphy has long been an opponent of U.S. involvement in the war in Yemen.

Secretary of State Mike Pompeo said the sales were necessary to counter “the malign influence of the government of Iran throughout the Middle East region.” Citing unspecified intelligence, U.S. officials have said the threat from Iran has increased in recent weeks.

Some of the weapons could be delivered to Saudi Arabia later this year, while other arms will not ship for another year or more. The sale includes precision guided munitions, other bombs and ammunition and aircraft maintenance support.

It is unclear if Murphy and Young’s resolution would pass the Republican-controlled Senate before moving on to the House.