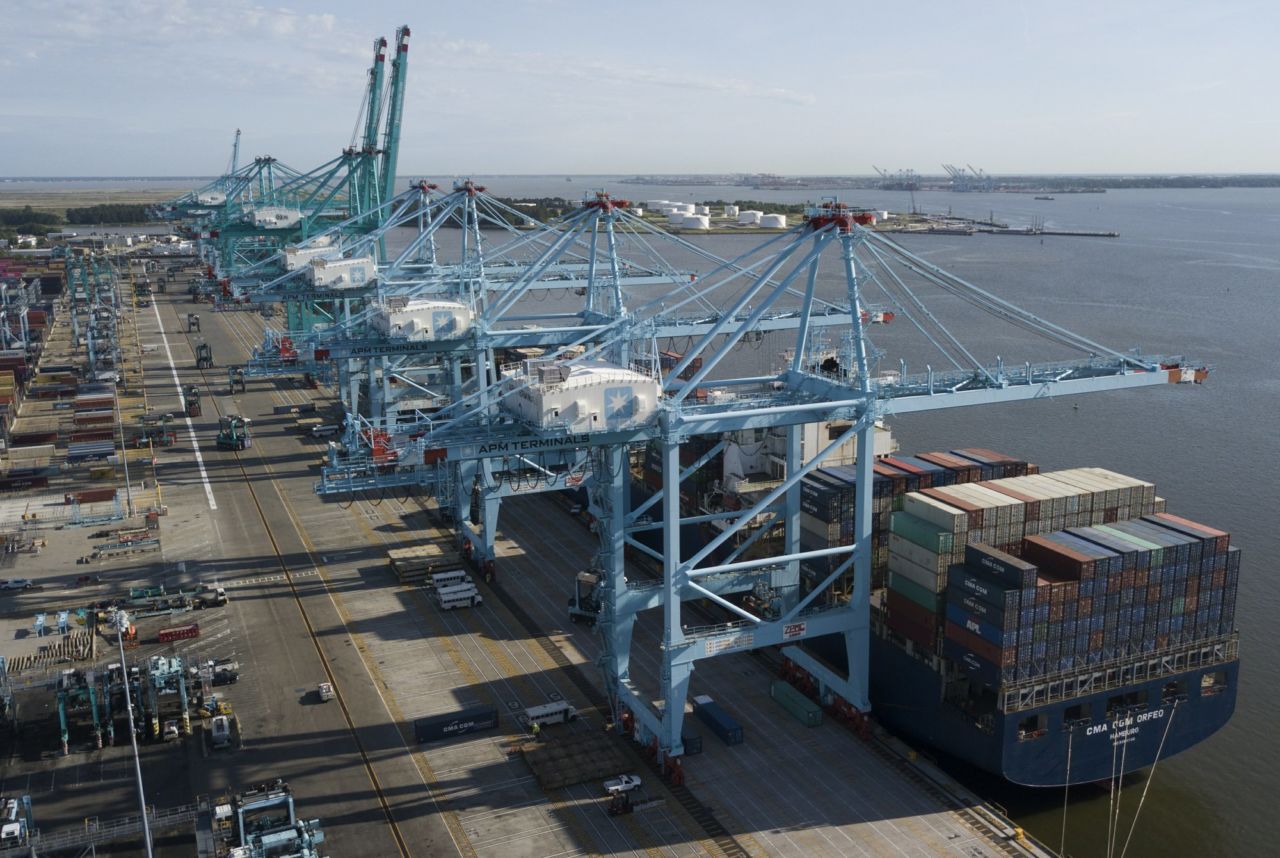 FILE - In this May 10, 2019, file photo a container ship is unloaded at the Virginia International Gateway terminal in Norfolk, Va. On Thursday, May 30, the Commerce Department issues the second estimate of how the U.S. economy performed in the January-March quarter. (AP Photo/Steve Helber, File)

It also sent stock markets tumbling, with the Dow Jones industrial average closing down roughly 355 points, or 1.4%. Investors poured money instead into the safety of bonds, sending yields lower and signaling that they fear the economy will slow in the coming months.

Trump vowed Thursday to slap a 5% tariff on all Mexican imports on June 10, just over a week away, and raise those tariffs to 25% by October, unless Mexico stops the flow of Central American migrants into the U.S.

If the tariffs were to take effect, they could eventually raise prices for a new Chevrolet Blazer SUV, a burrito at Chipotle’s, grapes at the grocery store or a new shirt. A 5% duty on the $346.5 billion of goods imported from Mexico translates into $17 billion in tariffs. Some of that higher cost might be paid, at least initially, by U.S. companies, but a significant portion is likely to be passed onto U.S. shoppers.

The impact of Trump’s latest tariffs, should they be imposed, will fall first on U.S. companies. Businesses in many industries have set up tightly linked supply chains with Mexico. Billions of dollars of auto parts, for example, are sent back and forth across the U.S.-Mexico border, in some cases several times, as components are added and integrated into finished cars. Similar networks exist in other industries, from clothing to electronics. The import taxes could quickly translate into much higher costs.

“That’s what’s so concerning about these tariffs,” said John Mitchell, president of IPC, a trade group representing the electronics industry. “It undercuts the region’s ability to leverage each other’s strengths to benefit North American manufacturing.”

Peter Navarro, a top trade adviser to the Trump White House, insisted in an interview on CNBC that the Mexican government and businesses would pay the tariffs. But about 40% of imports from Mexico are from U.S.-affiliated companies, meaning there is no Mexican company that would pay. Instead the tariffs will simply raise costs for U.S. companies — and ultimately for consumers — particularly for parts that cross the border several times, Mitchell said.

The U.S. economy has been integrating with Mexico’s since the implementation of NAFTA in 1995. All U.S.-made cars now include at least some parts from overseas, and 37% of those parts are from Mexico.

“Any barrier to the flow of commerce across the U.S.-Mexico border will have a cascading effect — harming U.S. consumers, threatening American jobs and investment, curtailing the economic progress that the administration is working to re-ignite,” said David Schwietert, interim president of the Auto Alliance trade group, which represents U.S. automakers and foreign companies that build cars in the United States, such as BMW and Toyota.

Shares of General Motors Co., which imports more vehicles into the U.S. than any other automaker, tumbled 4.4% by late afternoon.

“For GM, we roughly estimate that a 5% tariff could be a several-hundred-million dollar annual earnings hit,” said Itay Michaeli of Citi Investment Research.

The new tariffs also came as a surprise for many companies because the Trump administration had just renewed its push to win congressional approval for the U.S.-Mexico-Canada trade agreement, its update to NAFTA.

Sen. Chuck Grassley, R-Iowa, a usual Trump ally and the chairman of the Senate Finance Committee, condemned the president’s action as “a misuse of presidential tariff authority” that would burden American consumers and “seriously jeopardize passage of USMCA.”

Some industry representatives said the duties would not encourage companies to return production to the U.S., as Trump has said he wants, but actually have the opposite effect: It will discourage them from relocating to the U.S. because they’d have to pay more for imported parts.

“If you can’t buy your components here, you’re not going to think about coming back here,” Mitchell said.

Trump has already imposed 25% tariffs on $250 billion of goods from China. The additional duties on Mexican imports could weaken the U.S. economy. Growth was already forecast to slip to a roughly 1.5% annual pace in the April-June quarter, down from 3.1% in the first three months of the year.

Gregory Daco, chief U.S. economist at Oxford Economics, estimates that if the full 25% duties on Mexican goods were put in place, U.S. growth next year would be cut by 0.7 percentage point.

The U.S. imports $2.4 billion of clothing and textiles from Mexico. Stephen Lamar, executive vice president of American Apparel and Footwear Association, said companies are already thinking about how to cut costs but will likely have to raise prices because their profit margins are so thin.

In fact, shares of Kontoor Brands, which includes Wrangler and Lee, fell nearly 8% in afternoon trading. Shares of Levi Strauss were down 7%. Both companies obtain some of their denim from Mexico.