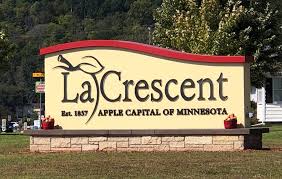 La Crescent has been known for years as the ‘Apple Capital of Minnesota,’ and hosts a yearly Applefest, even though there are no apple orchards within the city limits.

That image needs to be changed, according to some community leaders, who have launched a rebranding effort.

A public meeting Thursday night at La Crescent’s new event center was promoted as a way to get the public to suggest ideas for promoting the city.

Community development director Terry Erickson said there’s already a big response to a new survey being conducted in town. Around 400 have responded, so far.

Erickson and the Metre ad agency of La Crosse suggested that a fresher image could help stimulate business development in La Crescent and bring in new residents of all ages.

One new attraction that could get attention is the planned bike and pedestrian bridge on the Wagon Wheel trail, designed to bring hikers and bikers into downtown La Crescent.