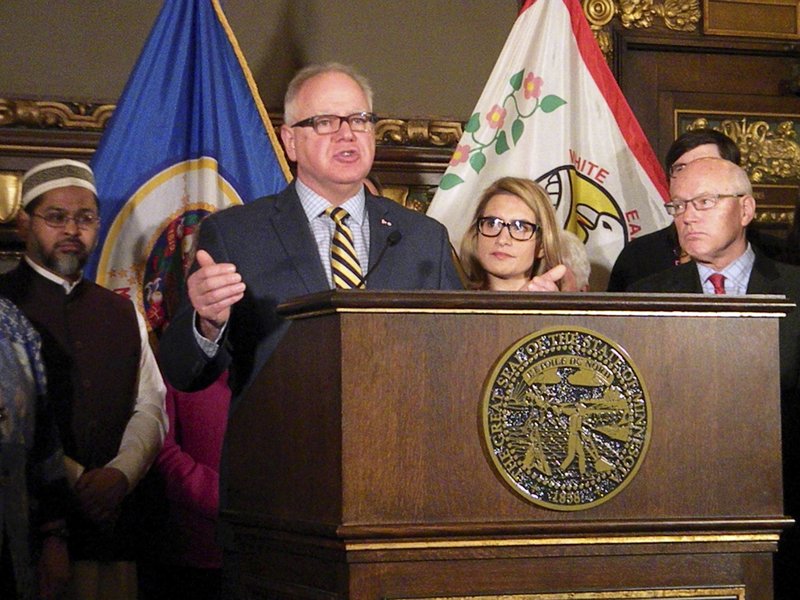 ST. PAUL, Minn. (AP) — The finish was messy and long negotiations behind closed doors stirred up indignation, but Gov. Tim Walz and Minnesota legislative leaders found a way to work together for deals on taxes, spending and policy to finish the essential work of the 2019 session.

The Democratic governor from Mankato rolled into office cheerleading his vision of “One Minnesota” and argued for new taxes to pay for it. In the end the leaders split their differences over taxes and spending, and dropped most of the controversial policy proposals that went too far for the other side to accept such as gun control.

Walz and Democratic House Speaker Melissa Hortman gave up the gas tax hike they wanted for transportation and to free up money for education and health care. Senate Republicans, under Majority Leader Paul Gazelka, swallowed a permanent extension of a tax on health care providers that they hated.

The path to the compromise finalized in a brief special session early Saturday was eased somewhat by a projected $1 billion surplus that let lawmakers increase spending by about 6% — the two-year budget is $48 billion — while allowing for some tax cuts.

It was the first Minnesota budget battle for Walz, though it was familiar territory for the six-term former congressman. It was Hortman’s first as speaker, though the Brooklyn Park attorney has held leadership positions for most of the time since she was first elected in 2004. It was Gazelka’s second as majority leader; the soft-spoken insurance agency owner from Nisswa tried with mixed success in the 2017 session to be a bridge in the difficult relationship between Democratic then-Gov. Mark Dayton and then-Speaker Kurt Daudt.

Former Vice President Walter Mondale, who represented Minnesota in the U.S. Senate from 1964 to 1976, applauded the session finish.

“Here you had a strong Senate, a strong House under the control of different parties, different philosophies, all kinds of political contests coming up where they’re going to be fighting each other,” he said. “It takes quite a bit for the leaders to say, ‘Let’s work this out and fight about it later.’ And they did that and I’m proud of them.”

Hamline University political scientist David Schultz wasn’t as positive, describing the process as similar to students who wait until the last minute to write term papers — and wind up with a result that shows it.

“Maybe this is the best they could come up with, but it’s not very good,” he said.

Minnesota has America’s only legislature where Republicans control one chamber and Democrats hold the other, but divided government takes other forms elsewhere and often results in dysfunction. While Republicans control Alaska’s governor’s office and Senate, its House is controlled by a majority coalition of Democrats, Republicans and independents. Alaska’s House was paralyzed for a month because of its difficulty in electing a speaker, and its Legislature is in 30-day overtime because of the ongoing inability to agree on a budget.

Divided government isn’t working very well either in neighboring Wisconsin, where Democratic Gov. Tony Evers defeated Republican Scott Walker in the November election but is struggling with a Legislature that remains firmly in GOP control. They’re having trouble finding ways to negotiate. Even Walker had trouble finding agreement with his fellow Republicans on some major issues.

Schultz said Minnesota’s divided Legislature offers a microcosm of American politics. As with Congress, he said, the split speaks to how the two parties have very different ideas about the role of government and what it should do, so finding middle ground is difficult because of their fundamental ideological differences.

“There’s the old line that says if everybody is unhappy it must be a good compromise,” he said. “I’m just not sure that at the end of the day we have a compromise so much as capitulation on both sides.”

Schultz, who has taught state and local politics for 30 years, said no other state has become as dependent on special sessions as Minnesota. The Legislature has held 10 budget sessions over the past 20 years and eight have gone into overtime, with in two partial government shutdowns and nearly a third.

“Minnesota has no pride in the fact that the process for more than a generation has been broken,” he said.

Other veterans of Minnesota budget battles were more upbeat.

“Anyone who thinks they’re going to get 100 percent of their agenda or ideas placed into law had better get another job because it doesn’t happen that way. It’s a consensus-building organization,” said Dean Johnson, who spent 28 years in the House and Senate. He served as Senate majority leader as a Democrat and a Republican minority leader before he split with the GOP.

“It’s very hard to make 48 billion dollars worth of compromises with 201 people,” Republican former House Speaker Steve Sviggum said. “There’s too many cooks in the kitchen.”

Mondale said compromise is becoming a lost art in American politics, “and we lose a lot because of it,” contrasting the outcome in Minnesota with the divisions across the country and the dysfunction in Washington.

“Minnesotans are very kind people. I don’t think we like these bitter fights,” he said. “We’ll do it if we have to but we’d rather get along. I think that showed in this resolution by the Legislature and the governor.”