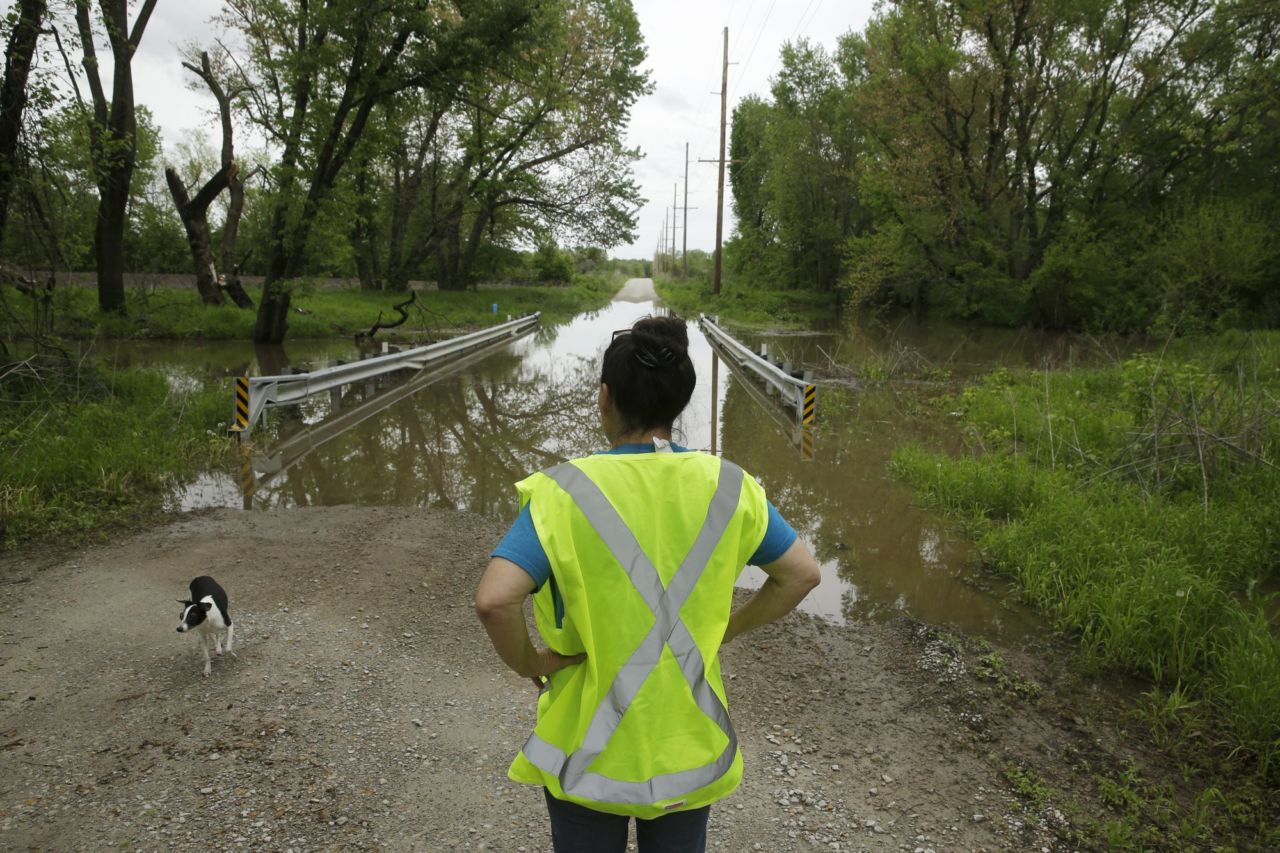 MOSBY, Mo. (AP) — The residents of this small riverside town have become accustomed to watching floods swamp their streets, transform their homes into islands and ruin their floors and furniture.

Elmer Sullivan has replaced his couch, bed and television. He’s torn up water-buckled floorboards. And he put a picket fence against the front of his house to cover up a gap left when waters washed out part of the stone foundation.

“I just don’t want to mess with it anymore. I’m 83 years old and I’m tired of it, and I just want to get out of it,” Sullivan said.

Finally fed up, Sullivan and nearly half of the homeowners in Mosby signed up in 2016 for a program in which the government would buy and then demolish their properties rather than paying to rebuild them over and over. They’re still waiting for offers, joining thousands of others across the country in a slow-moving line to escape from flood-prone homes.

Patience is wearing thin in Mosby, a town of fewer than 200 people with a core of lifelong residents and some younger newcomers drawn by the cheap prices of its modest wood-frame homes. Residents watched nervously this past week as high waters again threatened the town.

“It really is frustrating, because here we are, we’re coming through a wet season. There’s a chance that we could possibly flood, and we’re still waiting,” said Jason Stooksbury, an alderman who oversees the town’s efforts to curb flooding. “It’s not a good situation, but what are you going to do — it’s the government process.”

Over the past three decades, federal and local governments have poured more than $5 billion into buying tens of thousands of vulnerable properties across the country, according to an Associated Press analysis of data from the Federal Emergency Management Agency and the Department of Housing and Urban Development.

The AP analysis shows those buyouts have been getting more expensive, with many of the costliest coming in the last decade after strong storms pounded heavily populated coastal states such as Texas, New York and New Jersey. This year’s record flooding in the Midwest could add even more buyouts to the queue.

The purchases are happening as the climate changes. Along rivers and sea coasts, some homes that were once considered at little risk are now endangered due to water that is climbing higher and surging farther inland than historic patterns predicted.

Regardless of the risks, the buyouts are voluntary. Homeowners can renew taxpayer-subsidized flood insurance policies indefinitely.

With more extreme weather events, flooding “is going to become more and more of an issue, and there will be more and more properties that are at risk of total loss or near total loss,” said Democratic U.S. Rep. Peter DeFazio of Oregon, chairman of the House Transportation and Infrastructure Committee, which has jurisdiction over FEMA. “Then the question is: Are we just going to keep selling them insurance and building in the same place?”

DeFazio wants to expand and revamp a buyout process that he describes as inefficient and irrational. He’s backing a proposed pilot project that would give homeowners a break on their flood insurance premiums, as long as they agree in advance to a buyout that would turn their property into green space if their homes are substantially damaged by a flood.

Buyout programs rely on federal money distributed through the states, but they generally are carried out by cities and counties that end up owning the properties.

Most buyouts are initiated after disasters, but Congress has become more proactive. Appropriations for FEMA’s Pre-Disaster Mitigation Grant Program — which funds buyouts and other precautions, such as elevating homes before disasters strike — have risen from $25 million in 2015 to $250 million this year.

A recent study for the National Institute of Building Sciences found that society as a whole saves $7 in avoided costs for every $1 spent through federally funded grants to acquire or demolish flood-prone buildings. Yet it’s harder to gauge the benefits for the individuals who move.

After Superstorm Sandy pummeled New Jersey and New York in 2012, Duke University graduate school student Devon McGhee researched what happened to hundreds of Staten Island homeowners who took buyouts. She found that all but two of the 323 homeowners she tracked relocated to areas with higher poverty levels. Three-quarters remained on Staten Island, and about one-fifth moved to homes that still were exposed to coastal flooding hazards.

“When people take the buyouts, sometimes the money they are given on their home is not enough to buy a comparable home in a lower-risk area,” said McGhee, who now works as a coastal management specialist for an engineering and consulting firm.

Tammy Kilgore with her grandson. AP Photo/Charlie Riedel)
The prolonged buyout process also can take an emotional toll on people who are uprooted.

“Maybe they find a home, and it’s a good home, but it’s not their home where their kids grew up and had birthday parties and that sort of thing. There are these losses that occur in that transition process that can have implications for years,” said Sherri Brokopp Binder, an Allentown, Pennsylvania-based consultant who researches disaster buyouts.

Multiple layers of government bureaucracy can slow the buyout process. So can the typical hiccups that come with property sales.

In Kingfisher, Oklahoma, officials are still working to complete a buyout prompted by Tropical Storm Erin in 2007, even as the city has found itself inundated by flood waters again this week.

The city initiated a buyout in 2010, then received additional money to buy more homes about five years later. It’s purchased more than 80 so far, with about 10 more to go, said Annie Vest, a former Oklahoma state hazard mitigation officer who now works for an engineering firm administering Kingfisher’s grant.

The process is just getting started in some Texas communities swamped by Hurricane Harvey in 2017. Officials in Liberty County, northeast of Houston, held a meeting with residents last month to discuss a $6.7 million HUD grant to buy out homes near the Trinity River. The county still must get appraisals of the homes, conduct asbestos inspections and take bids for a demolition contractor.

Formal discussions of a federally funded buyout likely are a long way off in Hamburg, Iowa, which was inundated in March by a breach of a Missouri River levee.

But local officials aren’t waiting around. Mayor Cathy Crain said they are looking into the potential for a private developer to relocate some houses and to acquire higher land where new homes and businesses could be built.

Relocating to higher ground isn’t likely in Mosby, unless residents are willing to go elsewhere. The entire core of the town is in a floodway, which means that new development is limited.

Located just northeast of Kansas City, Mosby began as a railroad town in 1887 and expanded with coal mines in the early 20th century. At one time, it had a school, bank, grocery store and lumber yard. Those are gone now, and the trains merely pass by. In 2015, financial strains led the town to eliminate its small police force.

Mosby experienced some of its worst flooding that same year, with three floods in less than six weeks. The next year, city officials began pursuing the buyouts, and more than 40 homeowners signed up. They’ve been in limbo ever since. Local officials sought nearly $3 million in funding, submitted a revised application, obtained property appraisals and conducted environmental reviews.

Some residents have been scouting for new housing. Others are waiting to see the bids, which are expected this summer.

Sullivan hopes to get $28,000 for his home. He would move near his sister in southeastern Missouri, but he’s getting impatient.

Sitting on the concrete porch of the white wooden house where she’s lived for the past 36 years, Tammy Kilgore explains that “everybody’s just really on edge and ready to leave.”

“The floods, I’m tired of dealing with them, I really am,” she said. “I think they should have bought out this town a long time ago.”