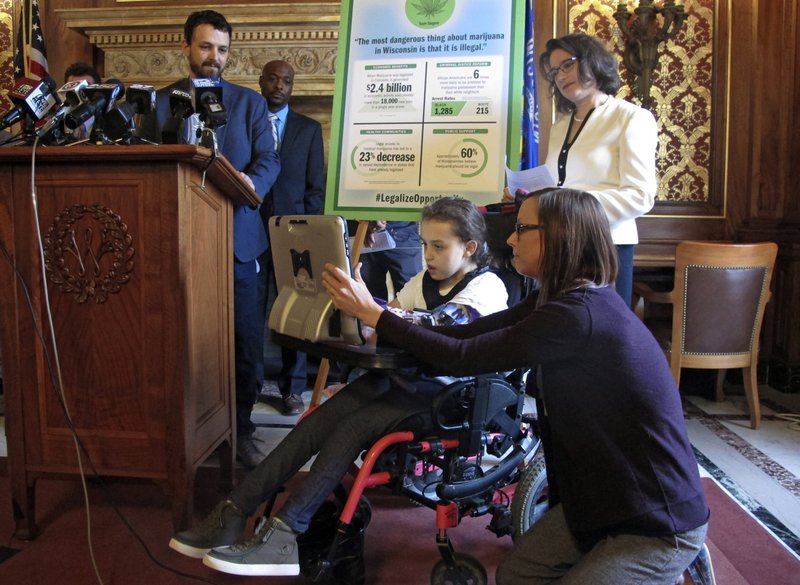 Norah Lowe, 10, speaks through a computer in favor of legalizing medical marijuana with her mother, Megan, at her side while her dad, Josh, stands at the podium and state Rep. Melissa Sargent watches on Thursday, April 18, 2019, in Madison, Wisc. The Lowes and others attended a news conference announcing Sargent's latest attempt in the Wisconsin Legislature to legalize marijuana. (AP Photo/Scott Bauer)

MADISON, Wis. (AP) — Marijuana advocates have high hopes that the latest proposal to legalize pot in Wisconsin has a better chance of success than ever given growing public support, but the bill unveiled Thursday again faces stiff opposition from Republicans who control the Legislature.

That’s not deterring Democratic Rep. Melissa Sargent, of Madison, who said voter approval of non-binding referendums in support of medical marijuana and recent polls show public support is at “an all-time high.”

“The people of our state want this to happen,” she said.

Sargent gathered a broad array of supporters, including a girl suffering from a rare condition that limits her ability to speak and move, a farmer looking for a new cash crop, and advocates for criminal justice reform who say the move would address racial disparities in drug arrests.

Ten-year-old Norah Lowe, who has the neurological disorder Rett Syndrome, spoke through a computer to lend support for medical marijuana to help with her condition.

“My body is always moving, my muscles are very hard to control,” she said, sitting in a wheelchair with her mother, Megan, by her side. Others with the same condition have seen success with using medical marijuana, Norah Lowe said.

“I just want to be able to use the same medicine my friends are using,” she said.

Sargent said it made sense to fully legalize marijuana to help people like Norah who want it for medical reasons, while recreational pot would be an economic boon to the state and address racial disparities in prosecutions for drug offenses.

“The people of Wisconsin have said loud and clear that prohibition in Wisconsin is not working,” Sargent said.

In a nod to that growing support, Democratic Gov. Tony Evers proposed legalizing medical marijuana and decriminalizing possessing, manufacturing or distributing 25 grams of marijuana, enough to make about 50 joints.

But Republicans appear to be unconvinced.

In February, Assembly Speaker Robin Vos said he did not think the Evers proposal would pass.

“There is no chance Republicans are going to go to recreational marijuana,” Vos said. “They’re not going to decriminalize it so people can carry around bags of weed all over the state.”

Senate Majority Leader Scott Fitzgerald has been equally dismissive of approving any form of marijuana legalization.

Democrats have been trying every session for the past 10 years to get some form of marijuana legalization passed as other states have moved forward. Thirty-three states — including neighboring Michigan, Minnesota and Illinois — have legalized medical marijuana.

Sargent argued Wisconsin is “becoming an island of prohibition in the Midwest.”

Pressure from those supporters will force resistant lawmakers to change their position, Sargent said.

“I’m not afraid of the mountain we have to climb here,” she said.