Democratic presidential nominee, Harris, sends message to old-guard: Every era has its end 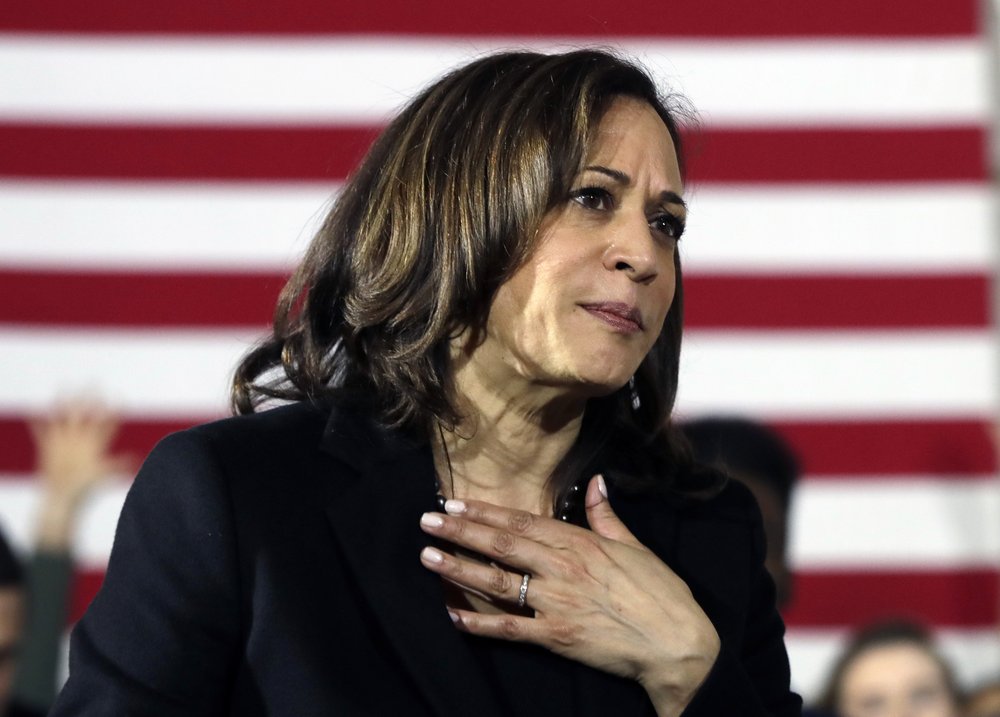 ATLANTA (AP) — California Sen. Kamala Harris sent a subtle signal to the old-guard of Democratic politics that every era has its end.

At an Atlanta church service dedicated to youth Sunday, the presidential candidate compared leadership to a relay race in which each generation must ask themselves “what do we do during that period of time when we carry that baton.”

Then she added with a smile that for “the older leaders, it also becomes a question of let’s also know when to pass the baton.”

The 54-year-old senator — one of the younger contenders for the White House in 2020 — did not mention any other presidential hopeful or tie her remarks to the Democratic presidential scramble. Her spokeswoman said she only wanted to encourage the youth at Ebenezer Baptist Church.

Her commentary to the congregation once led by Martin Luther King Jr. comes as former Vice President Joe Biden, 76, considers whether to join a field that already includes Vermont Sen. Bernie Sanders, who is 77. Both men have run for president before and fallen short.

’Biden and Sanders are seen as strong contenders for the Democratic nomination, though other candidates and some voters have emphasized the need for a more youthful approach to try and beat President Donald Trump in the general election. Several other candidates in the race, including two governors, are also in their late sixties.

Harris noted Sunday that King was 26 when he led the Montgomery Bus Boycotts that pushed him to the forefront of the civil rights movement.

Later Sunday, Harris told a rally at Morehouse College in Atlanta that Attorney General William Barr should testify under oath on Capitol Hill, rather than just submit the written summary of special counsel Robert Mueller’s report on the Russia investigation.

The Justice Department said Sunday that Mueller’s team did not find evidence that Trump’s campaign “conspired or coordinated” with Russia to influence the 2016 presidential election. Mueller also investigated whether Trump obstructed justice but did not come to a definitive answer.

Other highlights of Sunday campaigning:

Democratic presidential candidate Kirsten Gillibrand assailed President Donald Trump as a coward who is “tearing apart the moral fabric of the vulnerable,” as she officially started her campaign for president.

The senator spoke in New York Sunday, feet away from one of Trump’s signature properties, the Trump International Hotel and Tower.

She said that instead of building walls as Trump wants to do along the U.S.-Mexico border, Americans build bridges, community and hope.

Gillibrand is trying to position herself in the crowded field of Democrats seeking the party’s nomination. While some hopefuls have shied away from mentioning Trump, Gillibrand has not hesitated to do so.

The Massachusetts senator and Democratic presidential candidate tells a campaign rally that if seven children were dying from a mysterious virus, “we’d pull out all the stops till we figured out what was wrong.” But in terms of gun violence, she said the NRA “keeps calling the shots in Washington.”

Warren finished a two-day campaign trip to New Hampshire with an event at a middle school in Conway Sunday afternoon.

Warren focused much of her speech on her approach to economics, but paid special attention to unions Sunday. She said more power needs to be put back in the hands of workers.

Democratic presidential candidate Beto O’Rourke told voters in Las Vegas Sunday that President Donald Trump bears blame for the separation of families at the U.S.-Mexico border but responsibility lies with everyone in the country to fix the situation.

O’Rourke spoke Sunday to more than 200 people packed into and snaking around a taco shop on the city’s north end. He said immigrant families are leaving their home countries and journeying on foot because they have no other choice.

The former Texas congressman said desperate families were broken up in the U.S. when they were at their most vulnerable and desperate moments, and what happened to them “is on every single one of us.”