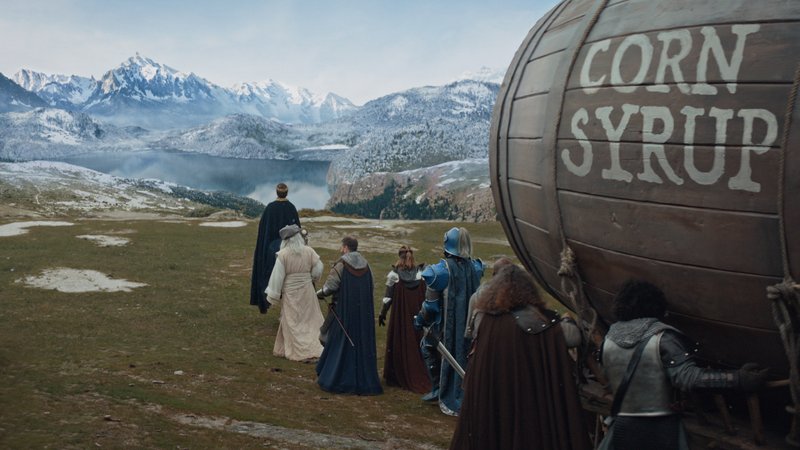 MILWAUKEE (AP) — A fight between beer giants escalated Thursday after MillerCoors filed a lawsuit against Anheuser-Busch that accused its rival of trying to “frighten” consumers into switching to Bud Light with “misleading” Super Bowl ads.

MillerCoors said in the lawsuit filed in Wisconsin federal court that St. Louis-based Anheuser-Busch has spent as much as $30 million on a “false and misleading” campaign, including $13 million in its first commercials during this year’s Super Bowl . The ad showed a medieval caravan pushing a huge barrel of corn syrup to castles for MillerCoors to make Miller Lite and Coors Light. The commercial states that Bud Light isn’t brewed with corn syrup.

Chicago-based MillerCoors and Anheuser-Busch have the biggest U.S. market share at 24.8 percent and 41.6 percent, respectively, but they’ve been losing business in recent years to smaller independent brewers, imports, and wine and spirits, according to the Brewers Association.

Anheuser-Busch’s ad drew a rebuke from the National Corn Growers Association, which thanked MillerCoors for its support. In its lawsuit, MillerCoors said it’s “not ashamed of its use of corn syrup as a fermentation aid.”

Corn syrup is used by several brewers during fermentation. During that process, corn syrup is broken down and consumed by yeast so none of it remains in the final product. Bud Light is brewed with rice instead of corn syrup, but Anheuser-Busch uses corn syrup in some of its other beers, including Stella Artois Cidre and Busch Light.

Responding to the lawsuit, Anheuser-Busch said its campaign is truthful and designed to bring consumers “transparency” about what’s in the beer they drink.

“MillerCoors’ lawsuit is baseless and will not deter Bud Light from providing consumers with the transparency they demand,” said Gemma Hart, the vice president of communications at Anheuser-Busch. “We stand behind the Bud Light transparency campaign and have no plans to change the advertising.”

MillerCoors maintains Anheuser-Busch is preying on health conscious consumers who have negative connotations of corn syrup, sometimes confusing it with the high-fructose corn syrup in sodas.

“Anheuser-Busch is fearmongering over a common beer ingredient it uses in many of its own beers, as a fermentation aid that is not even present in the final product. This deliberate deception is bad for the entire beer category,” Marty Maloney, a MillerCoors spokesman, said in a statement.

MillerCoors wants a judge to order Anheuser-Busch to stop the ads and to give MillerCoors any profits it earned as a result of the campaign. Besides the television commercials, Anheuser-Busch has spread its campaign through social media, full-page newspaper ads, and billboards placed in Milwaukee.

MillerCoors said its competitors campaign is intended to “irreparably harm” the company’s reputation.

The feud threatens to disrupt an alliance between the two companies to work on a campaign to promote the beer industry amid declining sales.