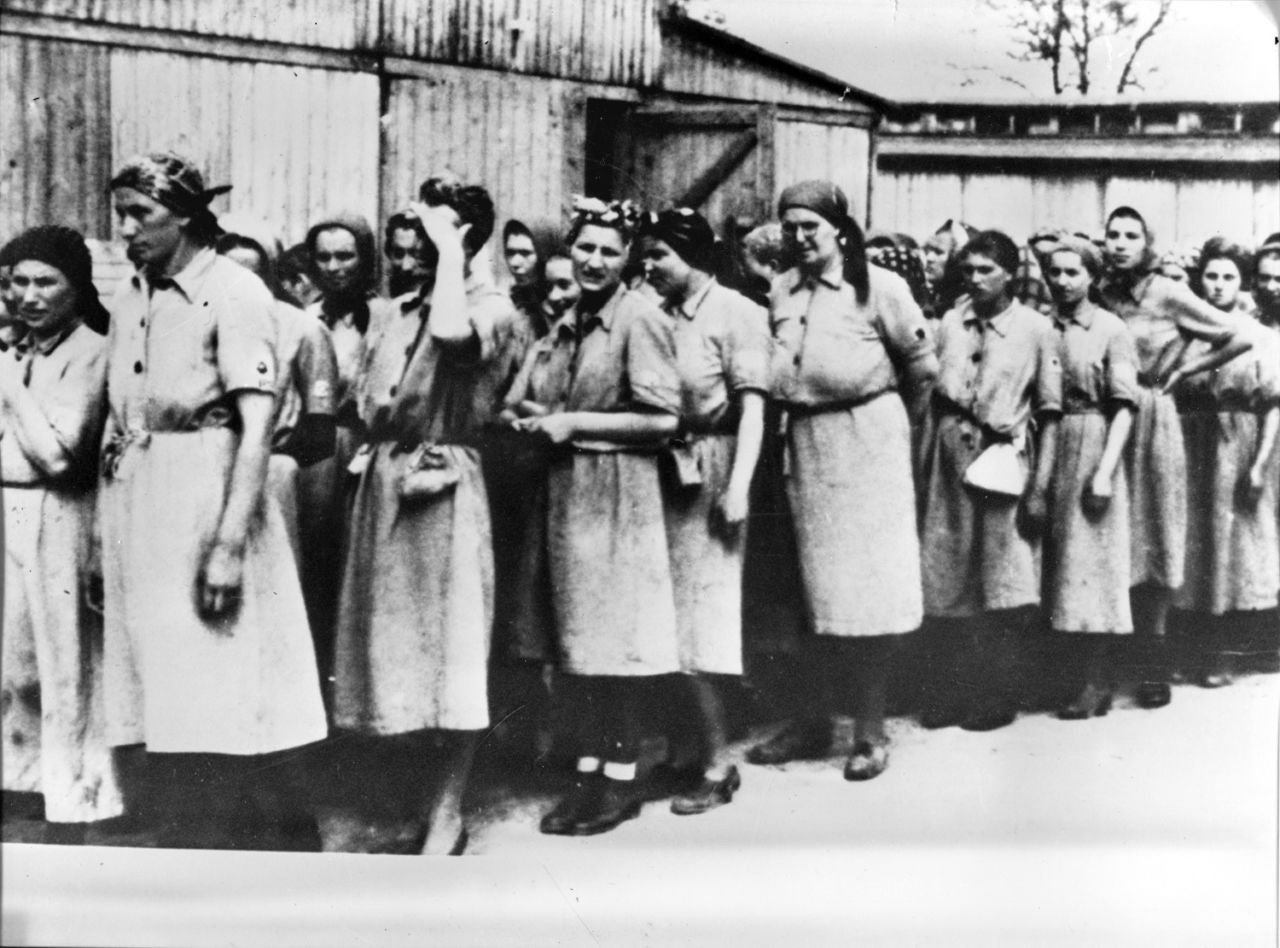 ** FILE ** This undated file photo, taken by an SS guard, shows women prisoners lined up for a hard labor assignment at the Auschwitz-Birkenau concentration camp complex in Poland during World War II. Unlike most who perished in the Nazi death camp, any woman who stepped off the train with a musical instrument had a chance to live by playing in a woman's orchestra that performed for the entertainment of SS officers. Now, an American orchestra and chorus are paying tribute to the death camp musicians with concerts in the U.S. and Germany titled "Music in Desperate Times: Remembering The Women's Orchestra of Birkenau."

There won’t be an empty seat at the Viterbo Fine Arts Center Main Theatre tonight.

A packed house is expected to hear the story of Magda Brown, a survivor of the infamous Auschwitz-Birkenau concentration camp.

The 91-year-old will share her story beginning at 7 p.m. Thursday. The event is free to the public but no reservations will be taken and seating is limited.

On her 17th birthday in 1944, she and her family were crowded onto a railroad boxcar with 80 others. They traveled for three days without food, water or any idea where they were being sent.

The final destination was the Auschwitz-Birkenau concentration camp in Poland. After arriving, Brown was separated from her mother, father, aunts, uncles, cousins and friends. It was the last time she saw them, as they were sent directly into the gas chambers.

The deportation of Hungarian Jews to Auschwitz-Birkenau started on May 15, 1944 and lasted until July 7, 1944. Nearly 440,000, half the Jews in Hungary, were deported. On average, 3 out of 4 people in each transport were gassed immediately upon arrival.

After two months of horrendous torture and imprisonment in Auschwitz, Brown was selected to be sent to a work camp in August of 1944.

She was one of 1,000 Jewish-Hungarian women who were transported to Allendorf, Germany, a sub-camp of the Buchenwald concentration camp, and the site of one of Germany’s largest munitions factories.

The women worked under dangerous conditions making bombs and rockets, filling them with liquid chemicals. The chemicals turned their skin yellow, their hair orange and their lips purple.

At the end of March 1945, Brown and her group were sent on a death march to Buchenwald. She and several prisoners decided that they were going to attempt to escape.

They crawled on the ground and hid in a nearby barn. For a day and a half, they hid in piles of straw, knowing that they would be shot if they were caught. Two American Armed Forces then discovered Brown and the other women and liberated them. Brown is forever grateful to these brave heroic soldiers.

After liberation, Brown spent six months in a displaced persons camp in Germany. With the assistance of the U.S. government, she was able to return to Hungary and search for her family.

Out of her extended family of 70, only six cousins had survived. Brown sought to locate her brother, Miklos, who served in the Hungarian military’s Jewish labor force, and was captured and imprisoned by the Russian army.

Fortunately, after the war, Brown made contact with her aunts and uncles in the U.S., who sponsored her immigration to the U.S.

Her family members welcomed her to their home in Chicago in September 1946.

It took many years for Brown to overcome recurring nightmares of the Holocaust. Eventually, Brown was able to put aside the past and build a future. With the help of the National Council of Jewish Women, Brown attended evening classes in American History and English.

In 1949, she married Robert Brown and, together, they raised their daughter, Rochelle, and son, Bruce. Brown was finally reunited with her brother, Miklos, in 1962, nearly two decades later.

Brown is a member of the Speaker’s Bureau of the Illinois Holocaust Museum and Education Center.

Although it is painful to remember her horrendous experiences, she believes her story and others have to be told.

From one-on-one interviews with students to auditorium speeches, Magda is on a mission to tell her story to as many people as possible. She has spoken to more than 100,000 people at schools, universities, churches, synagogues and other events.

This lecture is part of the annual Teaching the Holocaust Workshop at Viterbo. The lecture is free and open to the public.