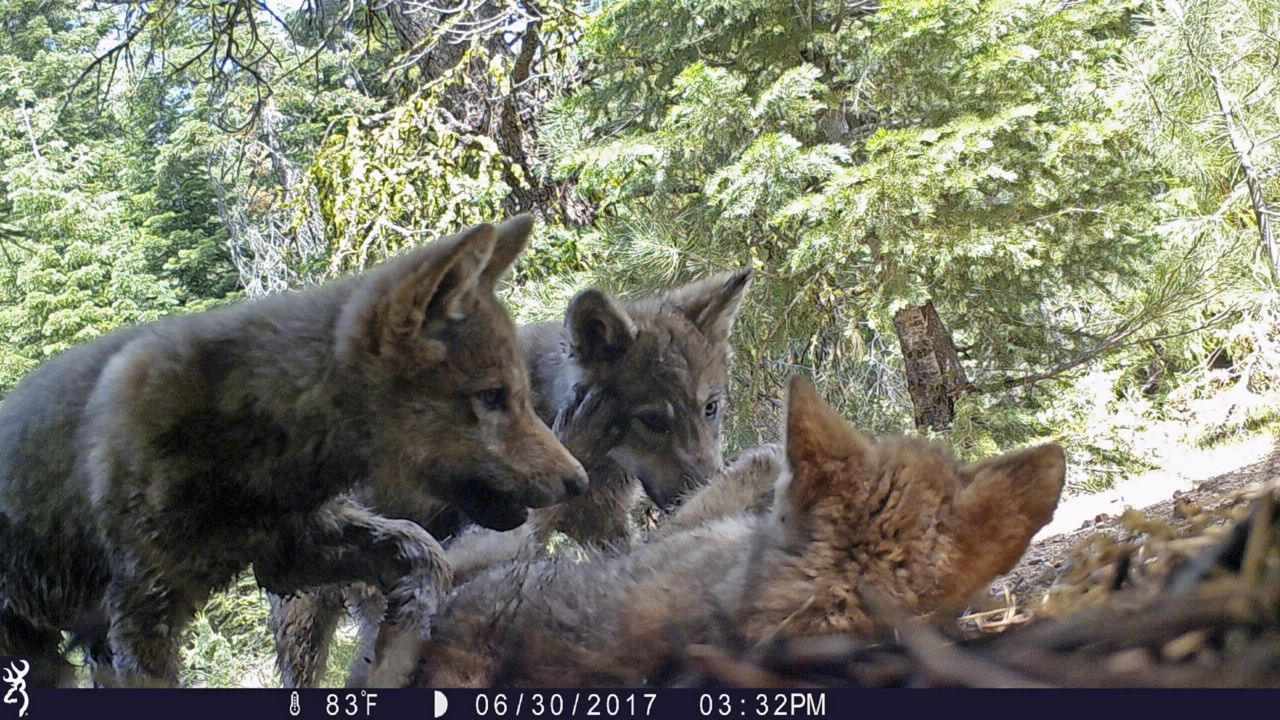 FILE - This June 30, 2017 remote camera image released by the U.S. Forest Service shows a female gray wolf and her mate with a pup born in 2017 in the wilds of Lassen National Forest in Northern California. U.S. wildlife officials plan to lift protections for gray wolves across the Lower 48 states, re-igniting the legal battle over a predator that's run into conflicts with farmers and ranchers after rebounding in some regions, an official told The Associated Press, Wednesday, March 6, 2019. (U.S. Forest Service)

BILLINGS, Mont. (AP) — A proposal to strip gray wolves of their remaining federal protections could curtail their rapid expansion across vast swaths of the U.S. West and Great Lakes, yet the predators already are proving to be resilient in states where hunting and trapping occur.

Thursday’s Interior Department proposal to remove threatened and endangered species protections for wolves would end a decades-long restoration effort that saw a remarkable turnaround for an animal once nearly exterminated across the Lower 48 states. Now more than 6,000 gray wolves live in portions of nine states.

Authority over wolves would revert to state wildlife agencies with no obligation to maintain current numbers. Critics say that amounts to a death sentence for thousands of the animals, shrinking well-established populations and preventing wanderers from carving out new territory.

The track record suggests otherwise in parts of the Northern Rockies, where wolf numbers have not noticeably flagged in the face of aggressive hunting and trapping.

When legal wolf harvests began in Montana and Idaho in 2009, wildlife advocates and some scientists argued their numbers would plummet.

Hunters and trappers have since killed almost 4,400 wolves in the two states, according to data from state wildlife agencies obtained by The Associated Press. About 1,500 more were killed by government wildlife agents and property owners following attacks on livestock and similar conflicts.

But wolves are such prolific breeders that after each hunting season, their numbers bounced back the next spring. That continued even as wildlife regulators loosened trapping restrictions and allowed individual hunters and trappers to harvest multiple animals.

The wolf populations for the two states hovered at around 1,700 animals combined from 2009 through the beginning of 2016, the most recent year with figures from both states.

“We’re almost a decade into hunting and trapping and we still have a population that is robust and well distributed. It can be done well,” said Bob Inman, a biologist with Montana Fish, Wildlife and Parks.

Wildlife researcher Scott Creel at Montana State University said his examination of population data suggests sustained high harvest rates are pushing wolves near a “tipping point” that would drive the species into decline. State officials said they see no cause for concern and expect the population size to fluctuate.

Montana’s wolf numbers dipped from its 2013 peak over the last several years before increasing in 2017, the data show.

Meanwhile, packs from the Northern Rockies have spread into neighboring Oregon and Washington, where they had been absent for decades. A small number have also taken up residence in California.

Collette Adkins, a Minnesota-based senior attorney for the Center for Biological Diversity, acknowledged dropping federal protections would not drive wolves to extinction, despite earlier saying the proposal “was a death sentence for gray wolves across the country.”

But she said their recovery would “come to a screeching halt” as hunting and trapping are allowed in more states. That would put the species in a tenuous position in the Pacific Northwest and likely rule out its return to historic ranges, such as Colorado’s southern Rockies of Colorado and the Adirondacks in the Northeast, she said.

U.S. Fish and Wildlife officials say their goal was to prevent extinction, not restore wolves everywhere they once roamed. State officials say even without federal protection, wolves won’t return to their imperiled status of the early 20th century because modern hunting regulations focus on managing animals, not exterminating them.

“The only way wolves were removed from the Lower 48 was using techniques we don’t use anymore — poisons,” said Toby Boudreau, wildlife bureau chief for the Idaho Department of Fish and Game.

Endangered Species Act protections were given to the animals in the 1970s except in Alaska, where the population was never considered in danger. States that designate the wolf as threatened or endangered under their own laws and regulations include California, Colorado, Illinois, Nebraska, New Hampshire, New York, Texas, Virginia and Washington.

David Mech, a U.S. Geological Survey wolf expert, said the species likely would continue to grow and expand in the contiguous U.S. after losing its endangered and protected status, albeit more slowly.

Wolves can and will live any place people tolerate them, Mech said. He pointed to studies that suggest the southern Rockies could host up to 1,000 wolves, with vast areas of additional habitat in the heartland region from Texas to North Dakota.

The Interior Department will make a final decision on its proposal after a public comment period that runs through May 14.

The most immediate changes could come for more than 4,000 wolves in the Western Great Lakes. Wisconsin law requires its wolf hunts to resume if the state regains authority. Wildlife officials would make the call in Michigan and Minnesota.

Hunting, trapping or both were allowed in the region at various times between 2012 and 2014 before a federal judge shut them down by returning wolves to the endangered species list. State survey data for the Western Great Lakes showed at least modest wolf declines during the period.

Wolf advocates attributed the drop in Minnesota to hunting and trapping. Dan Stark of the state Department of Natural Resources said a more likely explanation was a 30 percent decline in deer, the wolf’s primary prey. Either way, wildlife managers say the populations in all three states remained strong.

If hunting is allowed, debate is likely over whether to maintain wolf numbers or seek cutbacks. Some farmers hope for smaller population, which they believe would reduce attacks that have killed hundreds of cows and sheep.

Montana wildlife officials credit a more aggressive effort to kill problem wolves with a sharp decline in livestock attacks since 2009. However, some scientists say hunting and trapping makes livestock a more tempting target for wolves because it disrupts the pack cohesion needed to bring down swift or bulky prey like deer, elk and moose.

Some Wisconsin groups are pushing to reduce their wolf population to 350 from about 900.

“If we’d kept them at that number, I think almost all livestock conflicts would have been gone,” said Mark Liebaert, a sixth-generation beef producer who said he’s considered quitting because of wolf kills and harassment.

But Ethan Lane of the National Cattlemen’s Beef Association said his organization’s priority is enabling farmers and ranchers to protect their herds. Making deep cuts in wolf numbers, he said, is “just not realistic.”