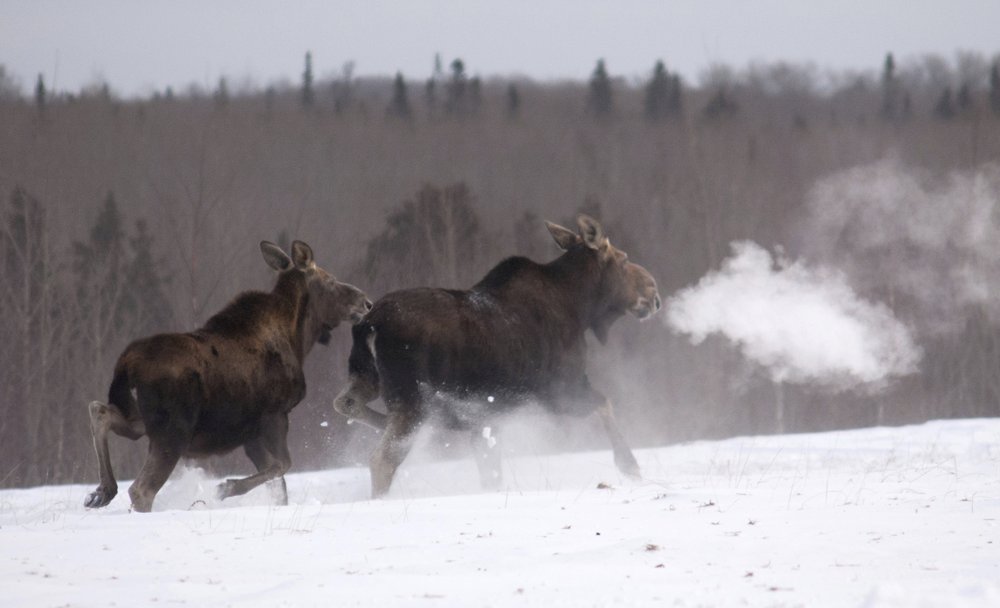 FILE - In this 2014 photo provided by the Minnesota Department of Natural Resources, a moose calf follows it's mother in the snow near Grand Marias, Minn. The latest survey finds the moose population in northeastern Minnesota remains low but stable for the eighth consecutive year. The DNR's moose project leader says while officials are encouraged that the moose population is not in the steep decline it was, the animal's long-term survival in the state remains uncertain.(Pete Takash/Minnesota Department of Natural Resources)

Results of the 2019 aerial survey estimate northeastern Minnesota’s moose population at 4,180. The DNR said that’s statistically unchanged from the 2018 estimate of 3,030 because of the survey’s margin of error. The agency said the results reflect a 90 percent certainty that the population is between 3,250 and 5,580 moose.

Officials are encouraged that the moose population is not in the steep decline it was, DNR moose project leader Glenn DelGiudice said. While moose likely will keep being seen in northeastern Minnesota in the short to medium term, their long-term survival in the state remains uncertain, he said.

DelGiudice said the DNR knows from its research that adult female moose are getting pregnant.

“The problem is there aren’t enough female moose that are successfully producing calves and raising them to one year. That’s a significant challenge in our efforts to maintain Minnesota’s moose population,” DelGiudice said in a statement.

Calf survival from birth in spring to January continues to be stable but consistently low, survey results found. Field studies indicate that survival rates are even lower by spring, leading to low numbers of moose calves living through their first year, the DNR said.

DNR research shows that predation by wolves accounts for about two-thirds of the calf mortality and one-third of the adult mortality. Sometimes injuries suffered in wolf attacks, not the predation itself, ultimately kills adult moose. The state’s moose population has also been under pressure from warmer weather, habitat changes and parasites such as winter ticks, liver flukes and brainworms. Illness can leave adult moose more vulnerable to predation.

This year’s moose survey involved flying in 52 plots distributed across northeastern Minnesota from Jan. 3-17. The DNR cautions that while the survey is statistically sound, researchers will never see and count all of the animals across the vast 6,000-square-mile (15,540-square-kilometer) survey area.