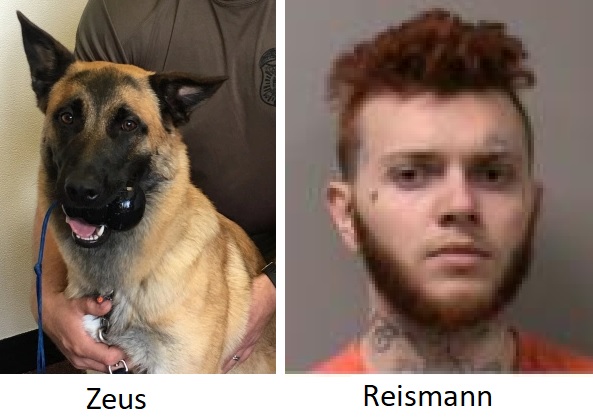 La Crosse Police K9 Zeus was on the case over the weekend, sent in after a felon hiding in a tiny crawl space.

Police had knowledge that Brett Reismann — wanted for felony probation and a parole warrant — was at 1201 5th Ave. S. and known to hideout in a tiny crawl space inside the house.

Given permission to look for Reismann at the home, police soon figured out where he was, according to the report. Police, however, determined it wasn’t safe to go in after him in such a confined space, knowing he would likely resist arrest.

So, police first used what they called a “throw bot” to determine exactly where Reismann was hiding in the three-foot-tall crawl space. A “throw bot” is a small robot with a camera attached, used in just these such incidents.

Once Reismann was confirmed to be hiding in the crawl space, police yelled for him to come out. He refused. Next they warned Zeus would be next to come try and coax him out.

Again, Reismann refused to comply, so in went Zeus.

The German Shepherd quickly located and apprehended Reismann, who immediately yelled to police, “I give up,” as he was pulled from hiding by the K9.

Officer Stephen Hughes then called Zeus back and Reismann surrendered.