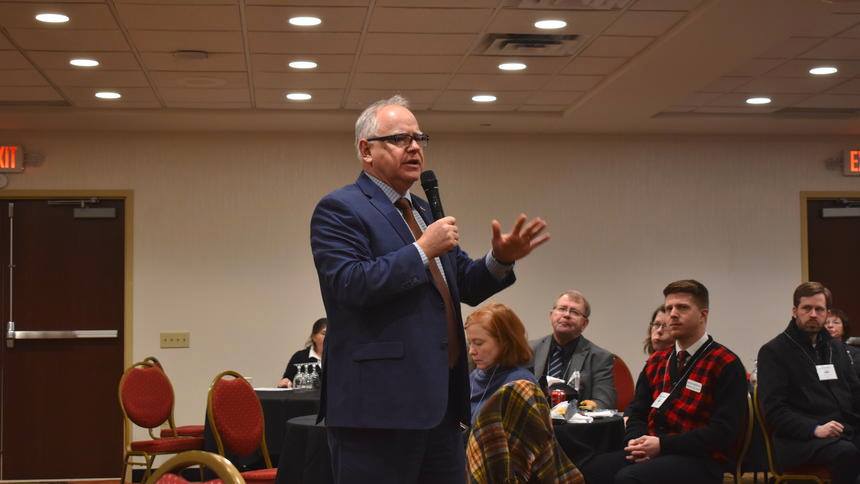 ST. PAUL, Minn. (AP) — Gov. Tim Walz proposed a $49 billion “Budget for One Minnesota” on Tuesday that raises the state gas tax 20 cents to pay for road and bridge improvements and includes significant increases in spending on education.

In his first budget proposal, the new Democratic governor called for $733 million in new spending on pre-kindergarten through 12th grade education over the next two years. That includes a $523 million boost in state aid for school districts by increasing the basic per-pupil funding formula by 5 percent over two years.

Much of the talk around the Capitol this session has been about bipartisan cooperation. Walz now faces GOP opposition, especially in the Senate where Republicans have a three-vote majority. Democrats who lead the House were broadly supportive. Walz said Republicans should recognize that his budget reflects the campaign promises that got him elected by a wide margin.

“I think they will come to the table, have a spirited debate, and we’ll reach a compromise, and we will invest in a Minnesota that works for everyone,” Walz said at a news conference.

But Republican leaders said they oppose the governor’s plan. It comes amid a $1.5 billion budget surplus, though that’s expected to shrink a bit in the next revenue forecast later this month.

“This first budget is the kind of budget you get when you promise everyone everything,” Senate Majority Leader Paul Gazelka said. House Minority Leader Kurt Daudt dubbed it “One Expensive Minnesota.”

On health care, Walz proposed cutting premiums on the state health insurance exchange MNsure by 20 percent and creating a tax credit to ensure that Minnesotans who buy health insurance on the individual market spend no more than 10 percent of their income on health care. He would also create a statewide public buy-in program called ONECare Minnesota to expand coverage choices on the individual market.

For rural Minnesota, Walz proposed $61 million in additional aid to cities and counties, a $70 million “moonshot” to ensure that all households in rural Minnesota have high-speed internet access, and more money to help rural communities cope with child care shortages.

“This budget puts forward the single greatest investment in greater Minnesota in the state’s history,” he said.

Including the gas tax increase, higher vehicle registration fees and vehicle sales taxes, and a 1/8 cent Twin Cities metro sales tax increase, the budget would generate $1.9 billion annually that would be reserved for roads, bridges and mass transit. The money would let Walz return $460 million to the general fund that now goes to transportation funding so that the money can be spent on education instead.

Walz’s budget also presumes that lawmakers will prevent the automatic expiration of a 2 percent tax on health care providers, which funds programs that include the MinnesotaCare health plan for the working poor. The governor said letting it expire would create a nearly $1 billion deficit by 2023. But the Republican leaders framed that as a tax increase.

His budget would also raise taxes as the state syncs its tax code with the 2017 federal tax overhaul, by conforming to federal provisions on business taxes. He said the money would enable cutting taxes on farmers and small businesses by over $200 million, expand a tax credit for nearly 47,000 lower-income working families by an average of $227 per month, and make Social Security benefits tax-free for 56 percent of Minnesota seniors and lower for many others.

Walz plans to release details next week of a $1.27 billion public construction borrowing bill. It would include $300 million for higher education split between the Minnesota State and University of Minnesota systems.

Minnesota is the only state currently where Republicans control one chamber and Democrats control the other, but the state had divided government to some degree during six of previous Gov. Mark Dayton’s eight years.

“Every budget in divided government is difficult because we come from two very different points of view, and at the very end we have to come together and figure it out,” Gazelka said.