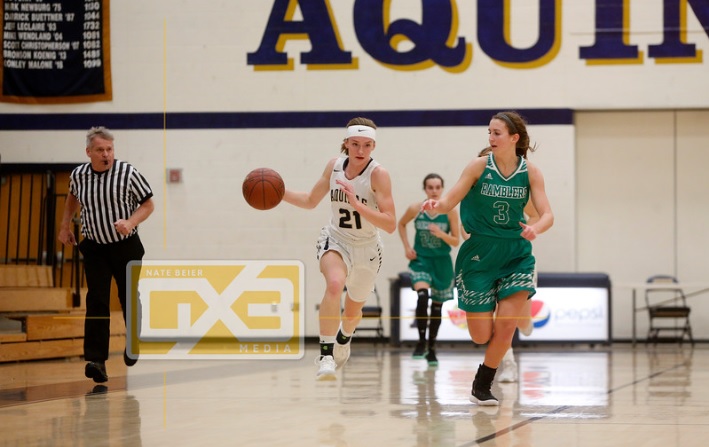 It hasn’t lost since the state championship … two seasons ago.

Since that one-point loss in the title game, the Aquinas High School girls basketball team has won 47 consecutive games and 74 out of its last 75.

When a team wins that much, Aquinas coach Dave Donarski tends to lose track.

“I’m glad the media did it because I knew we had won a lot in a row but I swear, I didn’t know what the number was,” Donarski said.

Saturday, that win streak will be put on the line, when the Blugolds (19-0) travel to Hopkins (19-0), the 20th-ranked team in the country, according to MaxPreps.

Donarski laughed, but kept the outlook on the streak in perspective, when jokingly asked if he secretly hopes his team loses Saturday, just to get the win streak off their back.

“I wouldn’t say that,” he said. “This is their legacy. They can keep winning and have that pride point at the end of this whole thing. That will be something really cool for them.”

On top of the Royals being one of the best teams in the nation — Donarski also joked his team was ranked around 115 or 170 — but also has the top college recruit of the 2020 class in 5-foot-10 point guard Paige Bueckers.

“When we I say No. 1, she is everything she’s billed out to be,” Donarski said.

“She’s Diana Taurasi good, truthfully,” he continued of the WNBA’s all-time leading scorer. “Notre Dame and UConn are all over her, so she’s got the greatest programs in the country that want her.”

Bueckers is, however, just one of many prospects on this Hopkins team — something Donarski doesn’t even really like to think about it anymore.

“They’re so deep, too,” he said. “They’ll go 8-9 deep. They’ve got, what, five kids are over 6-foot tall? They’ve got a ninth grader and an eighth grader, both highly touted Division I kids. They have a 6-foot off guard that’s a freshman, that’s also a division one girl, you got the best player in the country.

“The more I talk about it the more anxiety I get. They’re really, really good. We’re going to have to play relatively flawless to even be in the game.”

Of course, the Blugolds are nothing to overlook with two DI players of their own. Lexi Donarski is headed to Iowa State and averages 22.8 points, 5.6 assists. Teammate Courtney Becker is a Drake recruit, averaging 14.7 points, 7.6 rebounds.

Aquinas is ranked No. 1 in Division 4 in Wisconsin, while Hopkins is the top-ranked team in Class 4A.