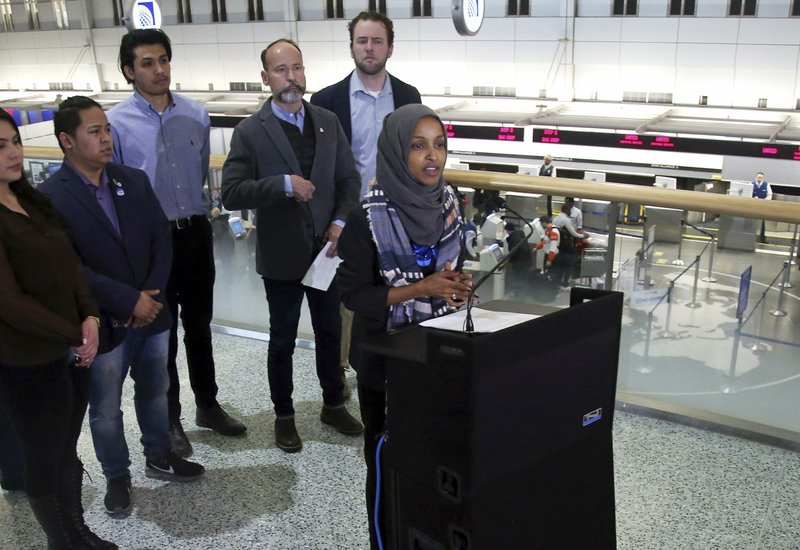 Rep. Ilhan Omar (D-Minn), right, addresses a news conference Tuesday, Jan. 22, 2019 at the Minneapolis-St. Paul International Airport accompanied by constituents behind her affected by the government shutdown, called for an end to the shutdown. (AP Photo/Jim Mone)

MINNEAPOLIS (AP) — Rep. Ilhan Omar of Minnesota called Tuesday for an end to the partial federal government shutdown, accusing President Donald Trump of holding the salaries of federal workers “hostage” so he can build a “symbol of hate,” a wall on the U.S. border with Mexico.

Omar , a Somali-American who is a former refugee herself, gathered people affected by the shutdown , now in its 32nd day, and immigration policies for a news conference at Minneapolis-St. Paul International Airport.

The Democrat who was first elected to Congress last year accused Republicans of trying to delegitimize government for decades. She says hundreds of thousands of people have now gone over a month without pay because she says Trump chose to shut down government over his demand for $5.7 billion to fund his proposed wall on the U.S.-Mexico border.

“Millions more are going without basic services like civil rights enforcement or immigration proceedings or even food inspection — all because the president has chosen to shut down the government over his wall,” Omar said. She also criticized Trump for pushing for what she called a “racist wall” on the southern border, and she called on Trump to “end your temper tantrum” and reopen government so the U.S. can then debate immigration policy.

“He thinks he can hold the salaries of hundreds of thousands of federal workers hostage to build this symbol of hate. Well, we’re here to say, ‘No way,’” Omar said.

Trump has said a wall would foil dangerous activity happening at the border.

Security screeners are among federal workers going without pay, and as worker absences have crept up, so have wait times.

Among those speaking against the government shutdown was Neal Gosman, 72, of St. Paul, a Transportation Security Administration screener at the Minneapolis airport. The average wait time there stretched to 41 minutes on Saturday — the longest in the country that day, according to the TSA.

“Every day, we are asked to look in bags for explosives, we are asked to look for weapons. We do this unpaid when we’ve been coming in,” Gosman said. “I think it’s only fair that we be paid the money that we earn every day. We, Coast Guard, Border Patrol and other folks that make this country safe and secure, we don’t get that much money, but we should be paid.”

Nick Pladson, acting director of the Minneapolis office of the U.S. Economic Employment Opportunity Commission, told reporters almost everyone in his office has filed for unemployment.

“Everybody is concerned about when we’re going back to work, when the next paycheck is coming, and how we’re going to pay mortgages that are coming due, at least for me, in the coming month,” Pladson said.

Rep. Collin Peterson, a Minnesota Democrat, says fellow Democrats should approve Trump’s request for wall funding. “Give Trump the money,” Peterson told KFGO Radio . “Why are we fighting over this? We’re going to build that wall anyway, at some time.”

Elsewhere, a town hall meeting held Tuesday by Rep. Tom Emmer in Ramsey was dominated by frustration over the shutdown. The Star Tribune reported that most of the attendees vocally opposed Trump and his plans for a border wall, with several booing and talking over Emmer, a Republican who represents a swath of Minnesota from the northwest suburbs toward St. Cloud.

Janine Smullen of Big Lake said her family has had to cut back as her husband, a chief inspector for the Federal Railroad Administration, has been working without pay.

“We used to go out to dinner once a week, and we’re not going out to dinner,” Smullen told the Star Tribune afterward. “So the ripple effects of all this is huge. And it’s incredibly stressful … We have savings. A lot of these guys don’t. What do we do when the savings run out?” Smullen asked.