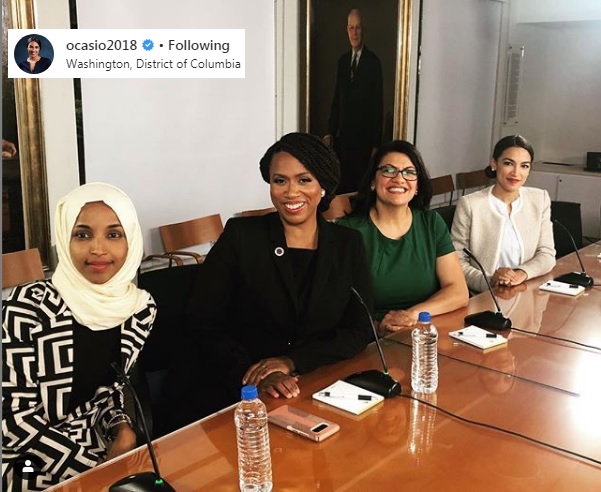 WASHINGTON (AP) — One group went to the White House with Republicans to talk about border security and reopening shuttered parts of the government.

The Democrats’ two paths within a 12-hour stretch this week demonstrated the dramatic differences emerging among members of the historic freshman class of House Democrats that — together — helped flip the House from Republican control in November’s elections.

The celebrity-studded group includes a record number of women, a new crop of veterans and diversity never before seen in Congress.

But the freshmen never were a monolith, and they’re not acting like one now. Two weeks into their congressional careers, with a partial government shutdown at hand President Donald Trump in the White House, they’re cutting different paths on Capitol Hill.

“There’s a sorting process,” said George Miller, a retired California congressman who was one of the reform-minded “Watergate babies” elected to the House in the aftermath of President Richard Nixon’s resignation.

It quickly became clear that campaigning and governing require different skill sets, he said, with learning how to operate effectively on Capitol Hill key among them.

There’s evidence that these choices and more are leading lawmakers who accomplished so much together into organizing themselves according to politics, experience and especially governing style.

Policy questions over such campaign-friendly ideas as “Medicare for all” and a “green new deal” for climate change pose other potential areas for disagreements.

And where some freshmen are emphasizing their newness to Washington, a healthy portion of their classmates are pointing to their long careers in the military and government as they cut a more traditional path in office.

Wednesday alone provided a notable example. Perhaps the most famous new lawmakers — Reps. Alexandria Ocasio Cortez of New York, Ilhan Omar of Minnesota and Rashida Tlaib of Michigan — led the second protest march in as many days from the House to the Senate to personally urge McConnell to help end the partial shutdown.

They didn’t find him — but they left contact information in his office, were admitted to the floor of the Senate and at one point had trouble navigating back to the House.

The forays weren’t a bust: An accompanying media horde recorded the whole thing, lending it a reality show quality that likely burnished their brand of storm-the-palace authenticity.

Not marching along was another group of freshman Democrats who are taking a more traditional approach to their congressional careers, some of them informed by their prior service in government and the military.

The day’s big media moment for Rep. Abigail Spanberger, D-Va., for example, came from an event that wasn’t even on-camera. She was among the freshmen Democrats and Republicans invited to the White House to talk to Trump about the effect the shuttered agencies were having on constituents.

Spanberger, a former CIA agent who voted against Nancy Pelosi for speaker, refused to even confirm she had been invited while the event was being organized, and tweeted about it afterward with emphasis on her experience.

“As a former federal employee, I know the hardships our public servants face as they work without pay or are furloughed,” she wrote.

Other freshman members who came to Congress from government careers tweeted similar sentiments.

Tweeted Rep. Lauren Underwood, D-Ill.: “I know the impact of a shutdown — back in 2013 during my time at @HHSgov, I was furloughed for about three weeks without pay.”

Another split has opened in freshmen ranks over the politics of any talk of impeaching Trump. Hours after the new Congress was sworn in Jan. 3, Tlaib was recorded telling a friendly interest group that “We’re gonna impeach the mother—-er,” referring to Trump.

More than the expletive, her vow to impeach Trump incensed Democrats who had labored to abstain from any such talk until special counsel Robert Mueller reports on his investigation into Russian election meddling.

As the story overtook the party’s messaging on the government shutdown the next day, Tlaib took what she described as an “intense” round of schooling from veteran Democrats about the consequences of speaking bluntly while a member of Congress. Tlaib said she was sorry for the distraction.

t group that “We’re gonna impeach the mother—-er,” referring to Trump. More than the expletive, her vow to impeach Trump incensed Democrats who had labored to abstain from any such talk until special counsel Robert Mueller reports on his investigation into Russian election meddling.

As the story overtook the party’s messaging on the government shutdown the next day, Tlaib took what she described as an “intense” round of schooling from veteran Democrats about the consequences of speaking bluntly while a member of Congress. Tlaib said she was sorry for the distraction.

Other freshmen strove to avoid commenting on the upheaval largely because they think such talk right now would detract from their mission to preserve national health care and other priorities they had campaigned on.

Some even went so far as to say they’d prefer Trump as their foil to Vice President Mike Pence, the former Indiana governor and House member who would be president in the so-far unlikely event that the House impeaches Trump and the Senate removes him from office.

Despite the emerging differences, there remains some overlap between groups, as well as mutual admiration and learning. Underwood, for example, was among those marching to find McConnell. So was Rep. Katie Hill, D-Calif., who also is a liaison for the freshman class to Democratic leaders.

And though two freshmen who are military veterans — New Jersey’s Mikie Sherrill and Pennsylvania’s Chrissy Houlahan — were assigned leadership roles in the New Democrat Coalition, they’re leading two dozen other freshmen, including some marchers.

On Thursday morning, Ocasio-Cortez taught a class to other members about how to use Twitter more effectively, and why. In return, House Democratic White James Clyburn taught her something.