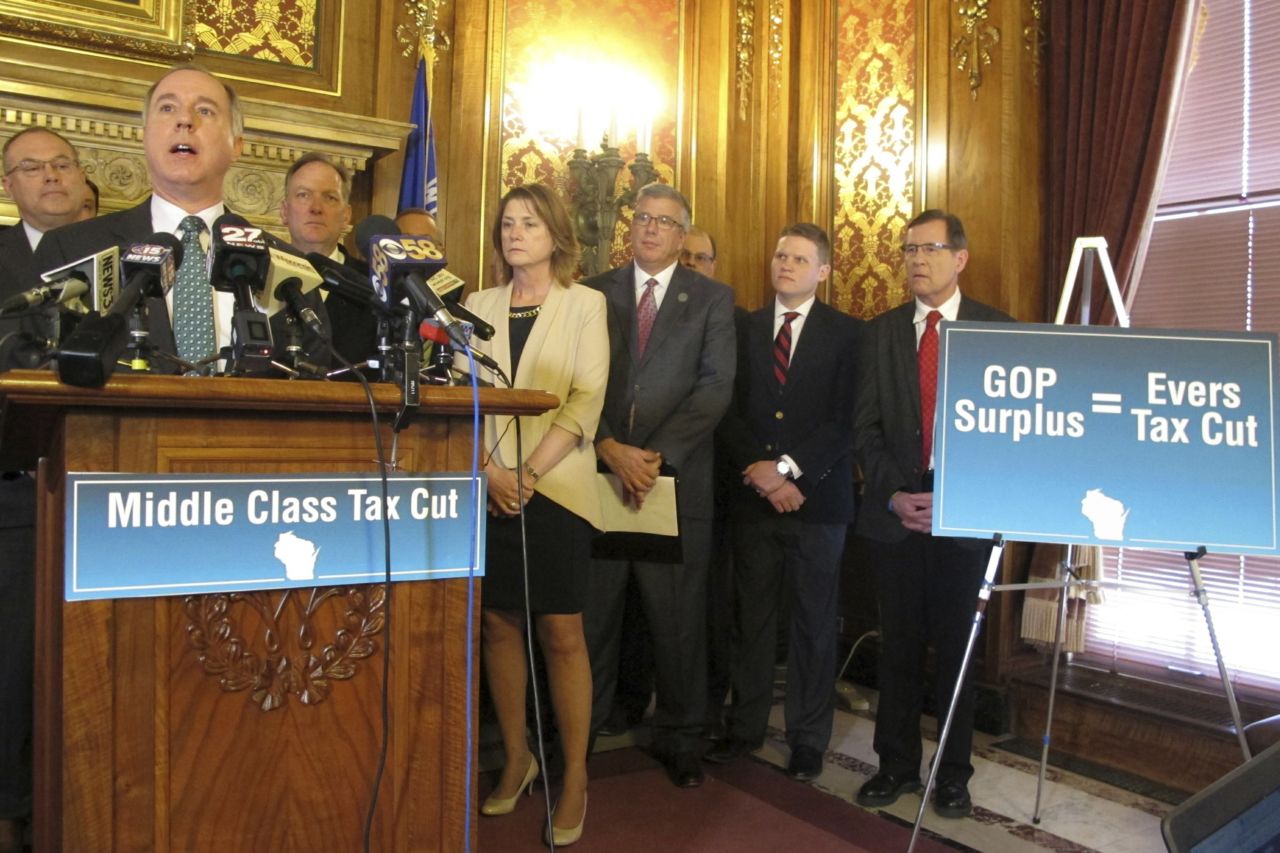 Evers came out against the GOP tax plan, while he asked Republicans leaders to consider changes to the health insurance proposal to reach a compromise that he would sign.

Both issues are early tests for how the governor and Republicans who control the Legislature will work together as they jockey for position and attempt to get the upper hand early in the governor’s first term. State government is under divided control for the first time in more than a decade.

Republicans were also moving ahead quickly with a bill that would provide a state-level guarantee of health insurance coverage for people with pre-existing conditions.

The Assembly Health Committee approved the measure Thursday, two days after a public hearing, which sets up a vote by the full Assembly on Tuesday.

Evers tweeted that he asked Republican leaders in a meeting Thursday to consider numerous changes to the bill, including preventing insurance plans from setting annual and lifetime limits, covering services for mothers and newborns as well as prescription drug costs.

Evers said the state must also withdraw from a multi-state lawsuit seeking repeal of the federal law — a move that would require legislative approval.

“I will not sign legislation that fails to fully protect Wisconsinites like me who have pre-existing conditions,” said Evers, a cancer survivor.

Assembly Speaker Robin Vos said later Thursday it was “too early to tell” whether Republicans would agree to Evers’ demands.

“I’m not going to negotiate by Twitter,” Vos said after emerging from a meeting with Senate Majority Leader Scott Fitzgerald. “I think that’s kind of BS.”

Vos wanted to approve the bill Tuesday, the first day lawmakers were in session. That evening, Evers is set to deliver his first State of the State speech.

Supporters of the GOP proposal argue that there’s no reason to oppose putting in place state protections, which would only take effect if the Affordable Care Act is repealed.

Opponents, however, say it wouldn’t work as planned unless other elements of the federal law, including those designed to keep down costs, are also in place.

Democratic Rep. Jimmy Anderson, who is paralyzed, called the bill a publicity stunt that gives “false hope” and does nothing to make health insurance more affordable and accessible.

On the tax cut plan, Vos cast the $340 million proposal unveiled at simultaneous news conferences across the state as a “fantastic chance” for Evers to deliver, with GOP support, on one of his main campaign pledges.

That’s not how Evers sees it.

His spokeswoman Melissa Baldauff said the GOP income tax cut plan “falls short” by relying on a $588 million budget surplus to fund it rather than capping tax breaks given out under the Manufacturing and Agriculture Credit program as Evers wants.

Baldauff faulted Republicans for rejecting federal money to pay for Medicaid expansion and hiring outside attorneys for lawsuits targeting last months’ GOP lame-duck session, moves she said “leave taxpayers on the hook for hundreds of millions of dollars.”

Scaling back the corporate tax credit program is a nonstarter for Republicans, who enacted the program under former GOP Gov. Scott Walker.

Rep. John Nygren, co-chair of the Legislature’s budget committee, said it didn’t make sense to “jeopardize what has brought us to this point of prosperity by undoing a tax cut.”

Republicans have also refused to expand Medicaid, even though the influx of federal cash is projected to save the state about $180 million a year.

The median family filing jointly would see a $310 reduction in their taxes, according to an analysis by the nonpartisan Legislative Fiscal Bureau.

Republicans said they hoped to introduce the plan next week with the intention of it taking effect in 2020.