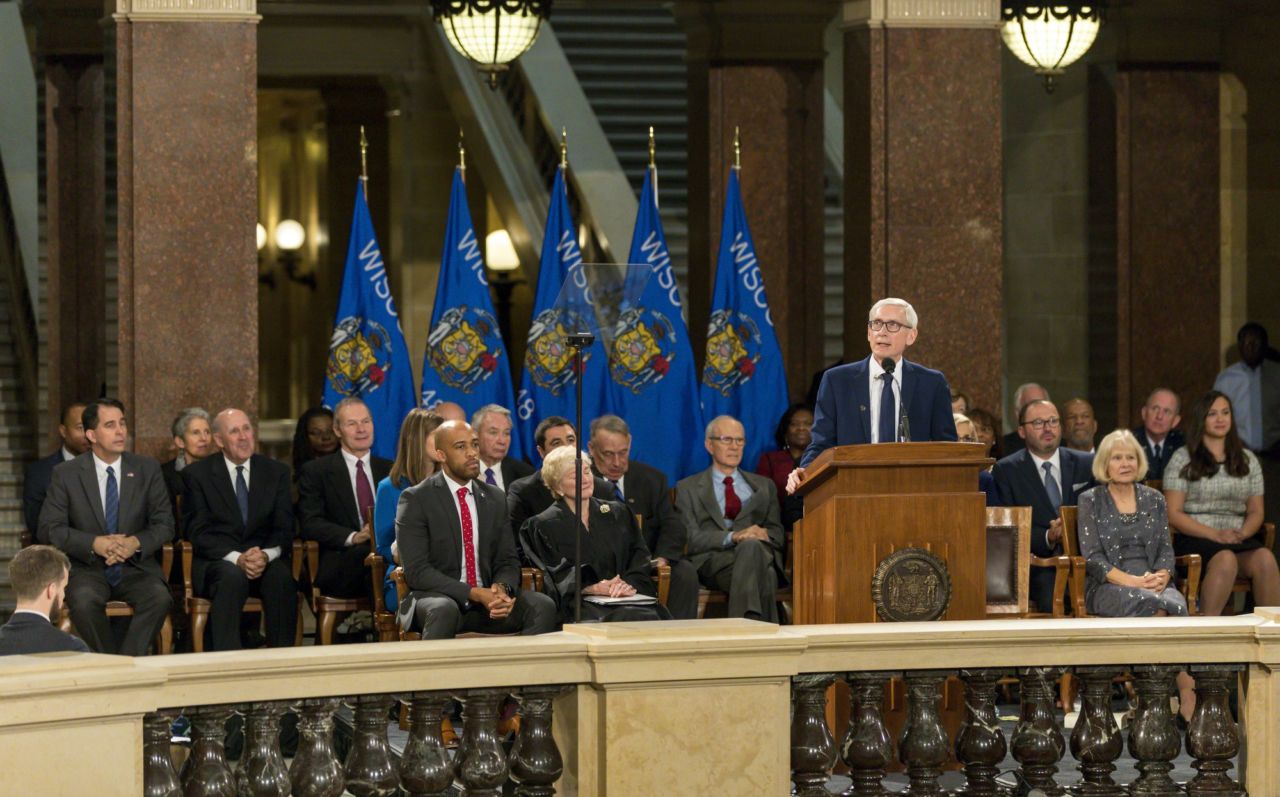 MADISON, Wis. (AP) — Newly sworn-in Wisconsin Democratic Gov. Tony Evers called for a rejection of “the tired politics of the past” in his inauguration speech Monday, urging lawmakers to find bipartisan solutions to the biggest issues facing the state.

Evers, the state superintendent of schools since 2009, took over for Republican Scott Walker and faces a Republican-controlled Legislature that will oppose many of his biggest priorities. Republican legislative leaders, also speaking on inauguration day, echoed Evers’ call for bipartisanship but said they wouldn’t back down in the face of a new Democratic governor.

“We must turn the page on the tired politics of the past, we must lead by example,” Evers said during his inauguration address in the rotunda of the state Capitol. “It’s time to remake and repair our state and reclaim our better history. The people of Wisconsin demanded a change this November, and that change is coming.”

“May we have courage in our conscience,” Evers said. “And may we be willing to do what’s best for the next generation rather than the next election.”

Evers’ ascendance as governor marks a new era in Wisconsin politics, ending eight years of Republican dominance. It also marks the first time since 1986 that all constitutional officers are Democrats.

Evers called for a return to the values of kindness, respect and civility, and he urged Republicans and Democrats to set aside party allegiances to work for a greater good. While some have said divided government is a recipe for gridlock, Evers called for compromise.

Republican Assembly Speaker Robin Vos said some may expect the Assembly to “veer into the left lane” now that Evers is governor, but the body will have to move down the center and Evers won’t “drive the car alone.”

“I promise you over the next two years, we will not let government expand at the expense of your freedoms,” Vos said.

Evers emphasized his campaign priorities, including fully funding public schools “at every level” from pre-kindergarten through college; making health care more affordable and accessible; and improving the conditions of Wisconsin’s roads.

“We cannot fix these problems unless people come before politics,” Evers said. “We’ve become paralyzed by polarity and we’ve become content with division. We’ve been indifferent to resentment and governing by retribution.”

Walker and Doyle were joined by three other former Wisconsin governors at the inauguration: Tommy Thompson, Scott McCallum and Martin Schreiber. Among the others who attended were both of Wisconsin’s U.S. senators, Ron Johnson and Tammy Baldwin, members of Congress, Milwaukee Mayor Tom Barrett and numerous past office holders.

In addition to Evers, all other constitutional officers elected in November were also sworn into office. Those were Lt. Gov. Mandela Barnes, Attorney General Josh Kaul, Treasurer Sarah Godlewski and Secretary of State Doug La Follette. La Follette is the only incumbent.

Barnes, the first African American lieutenant governor in Wisconsin history, said “the gravity of this moment is not lost on me as we strive for equity.”