Walker plans to give speeches, advocate for conservatives 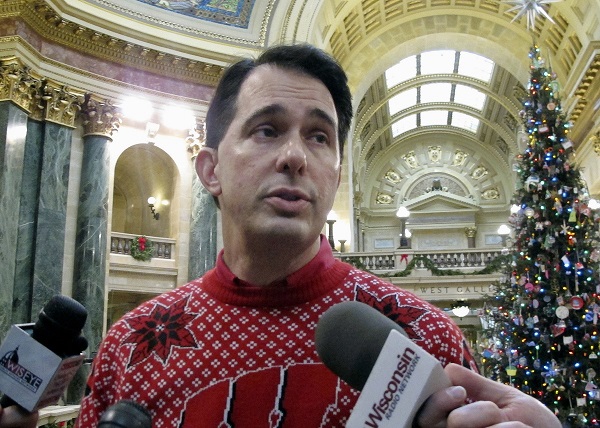 MADISON, Wis. (AP) — Wisconsin Gov. Scott Walker said Tuesday that after he leaves office next week he will join a speakers’ bureau to travel the country and talk in new ways about conservative issues, while helping in the effort to re-elect President Donald Trump.

The details about his future plans were the first Walker has given publicly since he lost his bid for a third term in November to Democrat Tony Evers, the Wisconsin state superintendent. Evers replaces Walker on Monday.

Walker, in a New Year’s email to his supporters, even made a plug for himself saying, “be sure to consider requesting me for meetings, conferences and other events across the nation.” Walker said he will join a speakers’ bureau and “focus on new methods to articulate a conservative message” while advocating for lowering taxes and overhauling the tax code.

Walker made his name nationally during his first term when he effectively ended collective bargaining for public workers and defeated a recall attempt. He cut taxes by $8 billion over eight years, while enacting a host of conservative priorities, before running for president in 2015. He dropped out shortly after Donald Trump got into the race.

Walker, 51, has been in public office for 25 years including the past eight as governor. His loss to Evers was his first since 1990, when at age 22, he first ran for the state Assembly.

After his loss to Evers, Walker was coy about what he would do next. But he revealed some of his general plans in a New Year’s email sent to his supporters on Tuesday, saying he intends to continue living in Wisconsin with his wife and near his grown sons, mother and his brother’s family.

“We will broaden our scope with an additional focus on returning power to the people in the states — from a federal government grown out-of-control,” Walker wrote. “That is the best way to Drain the Swamp on a permanent basis.”

While advocating for “draining the swamp,” Walker said he also plans to help re-elect Trump and help with candidates and causes in Wisconsin over the next two years. Walker said during his re-election campaign that he wouldn’t run for president again. In his email message, he doesn’t rule out future runs for office, saying only “We will see where God leads us in the future.”