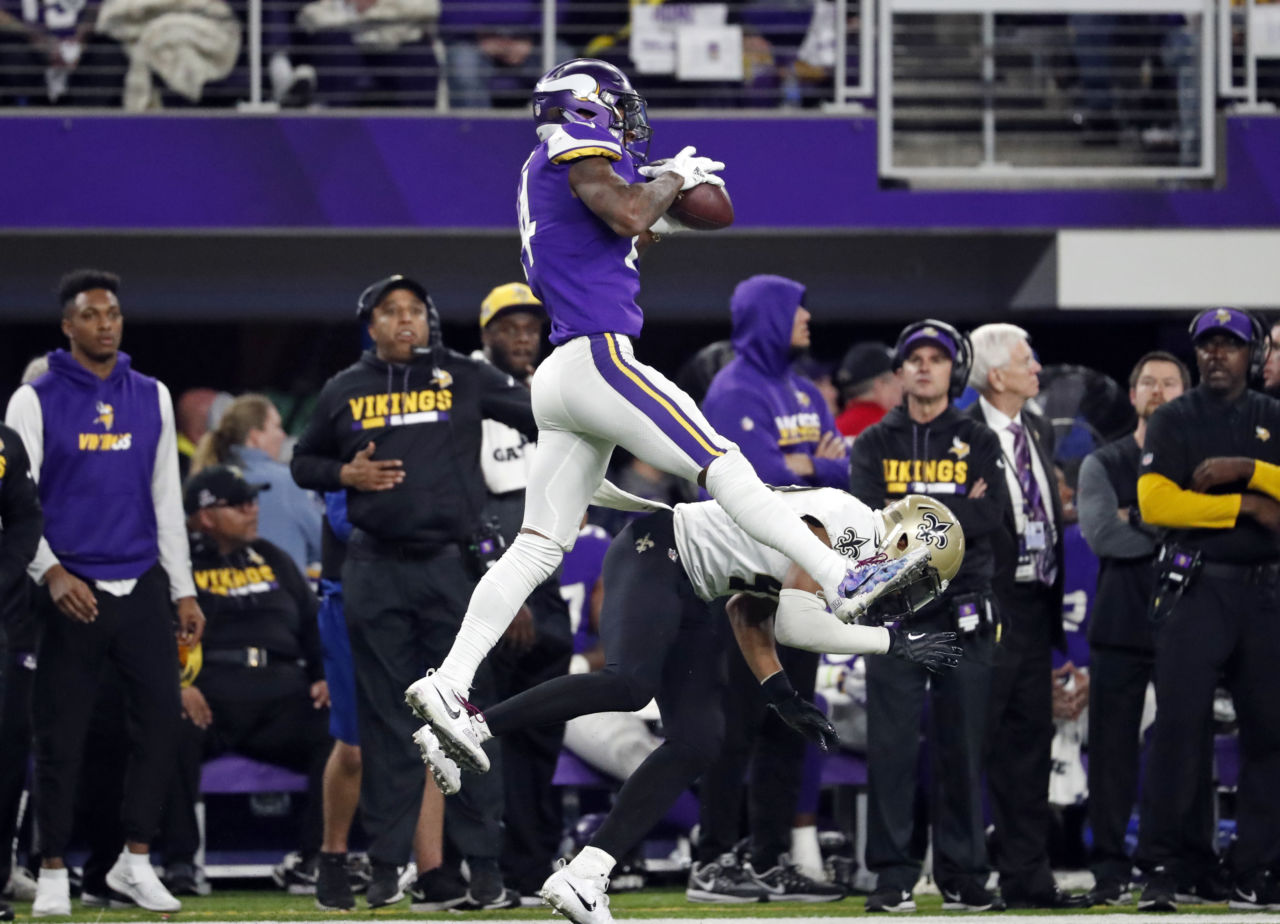 MINNEAPOLIS (AP) — When Miami running back Kenyan Drake completed his sidewinding path through New England’s prevent defense and crossed the goal line on the game’s final play last week, the Dolphins and their fans went wild with delight.

Not only did they defeat those long-despised Patriots and prevent them from clinching the division title, but they did so with one of the most improbable touchdowns this unpredictable sport can produce. Now, after pulling off that pass-toss-toss-run sequence that covered 69 yards for a 34-33 victory in Miami, the Dolphins have to hit the road to Minnesota.

They’ll face a sputtering Vikings team trying to keep hold of a spot in the playoffs in one of the NFL’s most daunting stadiums for opponents. But their greatest challenge might actually be figuring out how to move past the euphoria of that astounding finish and rekindle anew the emotional energy they’ll need for another win.

“Honestly, I’m just trying to turn the page and get ready for Minnesota,” said quarterback Ryan Tannehill, whose throw to Kenny Stills near midfield preceded a lateral to DeVante Parker and another one to Drake, who raced the remaining 52 yards for the score. “It was a pretty high high there, and a lot of hoopla around it, but at the end of the day, we still have a lot of work to do in this season.”

The winning touchdown was quickly branded as the ”Miami Miracle ,” which sure sounds familiar to Minnesota.

The Vikings, of course, beat New Orleans in their divisional-round playoff game last season on a last-play, 61-yard touchdown pass from Case Keenum to Stefon Diggs made possible when Saints safety Marcus Williams whiffed on his tackle attempt to allow Diggs to pivot and speed away through the open field.

The following week, with the prospect of playing the Super Bowl on home turf tantalizingly close, the Vikings fell flat in the NFC championship game in Philadelphia. Months after the 38-7 loss to the Eagles, coach Mike Zimmer acknowledged he underestimated the emotional toll even in victory that the “Minneapolis Miracle” might have had on his players.

Asked this week about the key to keeping a team grounded coming off such an exhilarating game, Zimmer said, “I’m not going to tell them that.”

This time, it’s up to Dolphins coach Adam Gase to figure that out.

“We really don’t have a choice. We’re in survival mode, as far as every game is big for us. We have to do everything we can to try to win this one,” Gase said. “We don’t have time to get caught up in last week.”

Here are some other key angles to follow for the game:

The Dolphins (7-6), before the tiebreaking criteria comes into play, are even with Baltimore, Indianapolis and Tennessee for the AFC’s second wild-card spot. Though the Dolphins are still alive in the AFC East, the Patriots have a two-game lead with only three games left.

The Vikings (6-6-1) still control the second wild-card spot in the NFC despite losing three of their last four games, ahead of three 6-7 teams: Carolina, Philadelphia and Washington. Chicago will clinch the NFC North title with one more win, or one more loss by the Vikings.

Since returning from a shoulder injury, Tannehill has posted a 100-plus passer rating in three consecutive games, the longest such streak of his career. His 105.7 rating for the season would be the second best in team history behind Dan Marino (108.9) in 1984 when the Dolphins reached the Super Bowl.

“The goal is just to constantly improve,” Tannehill said. “Learning from your past mistakes, and with where I’m at in my career, I feel like I should be playing my best football. I think I’m playing solid football. Obviously I still have room for improvement and want to keep pushing myself to keep playing better.”

The 30-year-old Tannehill’s salary cap hit in 2019 would be $26.6 million, leaving the franchise a decision whether to bring him back next year. He has a 12-4 record in his past 16 starts, but has had a series of injuries in his career.

“They’re a different offense with him in there, without a doubt,” Vikings defensive coordinator George Edwards said.

Running back Brandon Bolden and wide receiver Brice Butler, both unemployed at the end of training camp, have given Gase’s offense a needed boost.

Bolden, fourth on the depth chart behind Drake, Frank Gore and Kalen Ballage, had touchdown runs of 54 yards and 6 yards in his only carries last week against his former team. Butler caught a 23-yard pass for his first score of the year. Both players were picked up by the Dolphins after being discarded elsewhere, Bolden by the Patriots and Butler by Dallas. They’ve helped stem the loss of multi-purpose threats Albert Wilson and Jakeem Grant to season-ending injuries.

“It’s not easy to do,” Tannehill said, “but you have to give credit to coach Gase and his ‘evil genius’ mind of just figuring out ways to keep the advantage and keep moving guys around and use guys to the best of their ability.”

After topping 100 receiving yards in each of the first eight games for the Vikings, Adam Thielen has reached that mark only once in the last five games with an increased presence by opposing safeties around both him and wide receiver Stefon Diggs.

“Whether it’s one guy guarding us or two guys guarding us,” Thielen said, “we have to get open.”