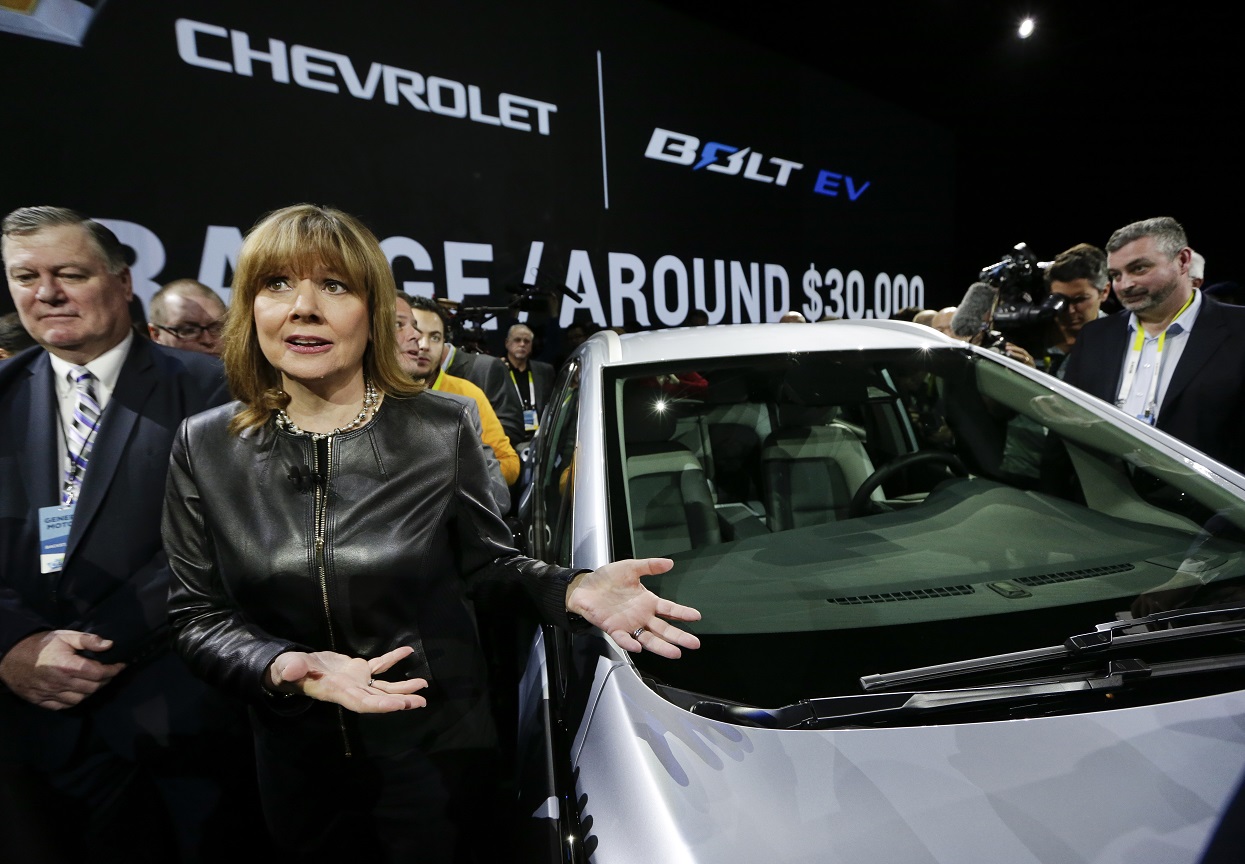 WASHINGTON (AP) — General Motors is fighting to retain a valuable tax credit for electric vehicles as the nation’s largest automaker tries to deal with the political fallout triggered by its plans to shutter several U.S. factories and shed thousands of workers.

Preserving the $7,500 tax incentive for buyers is crucial for GM as the company pivots from internal combustion engines in favor of building cars powered by batteries or hydrogen fuel cells. Yet the layoffs and plant closings could imperil GM’s push to keep the incentive. It helps make plug-ins such as the $36,000 Chevy Bolt more affordable at a time when competition from other electric vehicle makers is heating up.

GM faces opposition from President Donald Trump and other Republicans who consider the credit a waste of taxpayer money and want it eliminated. Trump, who has pledged a manufacturing rebirth in the Midwest, reacted angrily to GM’s ”transformation ” announcement late last month, declaring that his administration was “looking at cutting all GM subsidies, including for electric cars.”

The company already is on the verge of being phased out of the tax credit program unless Congress changes a law that caps the break at 200,000 vehicles per manufacturer. Without the incentive, GM may be forced to cut the price of its electric cars to keep prospective customers from taking their business elsewhere, according to automotive industry experts.

As evidence of the credit’s importance to GM’s future, the automaker has expanded its lobbying footprint in Washington and even joined forces with two rivals, Tesla and Nissan, to call for 200,000-vehicle limit to be scrapped.

Standing in the way of that goal is Sen. John Barrasso, R-Wyo., the chairman of the Senate Environment and Public Works Committee. Barrasso introduced legislation in October to abolish the tax credit, a move he said would save about $20 billion over the next 10 years. He has argued the market for electric vehicles is already established and “no longer needs the crutch of government assistance.”

“The idea of the subsidies had to do with trying to make sure that electric vehicles would be a viable technology,” Barrasso said. “Well, that’s clearly there.”

The tax credit came up briefly during a private meeting on Wednesday between Ohio’s senators, Republican Rob Portman and Democrat Sherrod Brown, and GM chief executive Mary Barra, according to a congressional aide familiar with the conversation. As part of the restructuring, GM said it will stop making the Chevy Cruze at its Lordstown, Ohio, plant by March and is considering closing the plant for good.

Portman told Barra that it’s difficult to help with priorities such as the electric vehicle credit when GM is moving production out of Ohio, according to the aide, who was not authorized to publicly discuss the private conversation and spoke on condition of anonymity.

One of the lobbyists working to salvage the credit for GM is Kent Hance, a former chancellor of Texas Tech University who is well connected in GOP circles, according to his online profile . Hance lists his role as a fundraiser for the campaigns of outgoing House Speaker Paul Ryan, R-Wis., Senate Majority Leader Mitch McConnell, R-Ky., House Majority Leader Kevin McCarthy, R-Calif., and others. He has known Rick Perry, the energy secretary and former Texas governor, for nearly 30 years.

GM in early August named a former Trump White House official, Everett Eissenstat, its senior vice president for global public policy, a post that oversees the company’s lobbying operations. Eissenstat, however, is not registered as a lobbyist, according to disclosure records filed with Congress. Before coming to GM, he was Trump’s deputy assistant for international economic affairs.

Under federal law, the $7,500 credit for buyers begins to phase out after a manufacturer has sold 200,000 qualifying electric vehicles. GM has estimated it will hit that threshold by the end of December, just as the Bolt will be facing new and potentially stiff competition.

Sam Abuelsamid, a senior analyst at Navigant Research, said Hyundai and Kia each will be selling compact SUVs in the U.S. beginning early next year that can travel 240 miles on a single battery charge, about the same as the Bolt. Ford will be launching a number of new plug-in hybrid models in 2019, including the Lincoln Aviator, Explorer and Escape.

“With the intensifying market shift away from cars to utility vehicles all of these are expected to be more popular than the Bolt,” Abuelsamid said. To remain competitive against the new entries, “GM will likely have to cut the (retail price) of the Bolt as well as any additional EVs they launch next year by the corresponding reduction in the tax credits,” he said.

Karl Brauer, executive publisher of Autotrader and Kelley Blue Book, said the credit is “hugely important” to electric vehicle manufacturers. Lowering the up-front cost of the vehicle typically plays a significant role in sales, he said, citing surveys that show more consumers would buy electric vehicles if the cars were affordably priced.

GM joined forces with Tesla and Nissan as well as several consumer and environmental groups to broaden its lobbying push even further. The EV Drive Coalition, which was launched in November, urged lawmakers in an open letter last week to put a provision in the must-pass government spending bill that does away with the 200,000-car limit.

“Eliminating the per-rmanufacturer cap will level the playing field for all EV manufacturers and spur innovation among domestic manufacturers, ensuring America’s leadership in the hyper-competitive, global auto market,” the coalition said.

Jeannine Ginivan, a GM spokeswoman, said the tax credit should be modified but declined to say whether the automaker backs a specific piece of legislation that would remove the cap.

“We believe an important part of reaching a zero emissions future and establishing the U.S. as the leader in electrification is to continue to provide a federal tax credit to help make electric vehicles more affordable for all customers,” Ginivan said in an email.

In addition to GM’s in-house lobbyists, four lobbyists from Hance Scarborough, the Austin, Texas-based firm that Hance founded in 1994, are working on GM’s behalf, including Hance, according to disclosure records.

GM also contracted with two other lobbying firms earlier this year to focus on electric and automated vehicle issues: the Polaris-Hutton Group and the DS2 Group. A fourth firm, the S-3 Group, was hired by GM in 2014 and earlier this year added the tax credit to its portfolio of lobbying issues.