On the way to deal with one international incident, while trying to figure out how to address another.

That’s the life of a Wisconsin senator this week.

Republican Ron Johnson told WIZM he’s flying to Ukraine Thursday night in support of its government, as it faces off with the Russian military giant to the north.

Johnson and other senators are still working out what to do over the butchering murder of journalist and U.S. resident Jamal Khashoggi at the Saudi consulate in Turkey.

“It’s a very messy situation,” Johnson said. “We need friends. We need allies. Saudi Arabia can be helpful from the standpoint of countering Iran’s malign influence.

“We also can’t turn a blinds eye to that type of depraved leadership, where you, you know, go out and assassinate somebody in the most horrific way.” 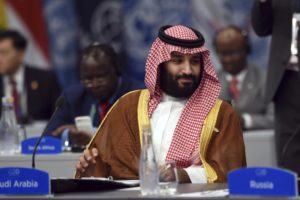 FILE – In this Dec. 1, 2018, file, photo released by the press office of the G20 Summit Saudi Arabia’s Crown Prince Mohammed bin Salman attends a plenary session on the second day of the G20 Leader’s Summit in Buenos Aires, Argentina. Turkey is seeking the arrest of two former aides to Saudi Crown Prince Mohammed bin Salman who were dismissed amid the fallout from the killing of Washington Post columnist Jamal Khashoggi.(G20 Press Office via AP, File)

Regardless, the U.S. is still backing Saudi Arabia in a proxy fight in Yemen, which has turned into a massive humanitarian crisis.

“Try and find an appropriate response that allows America to maintain influence, to try and reduce the slaughter, or limit the slaughter, that’s occurring in Yemen right now,” Johnson said. “It’s a horrific situation.”