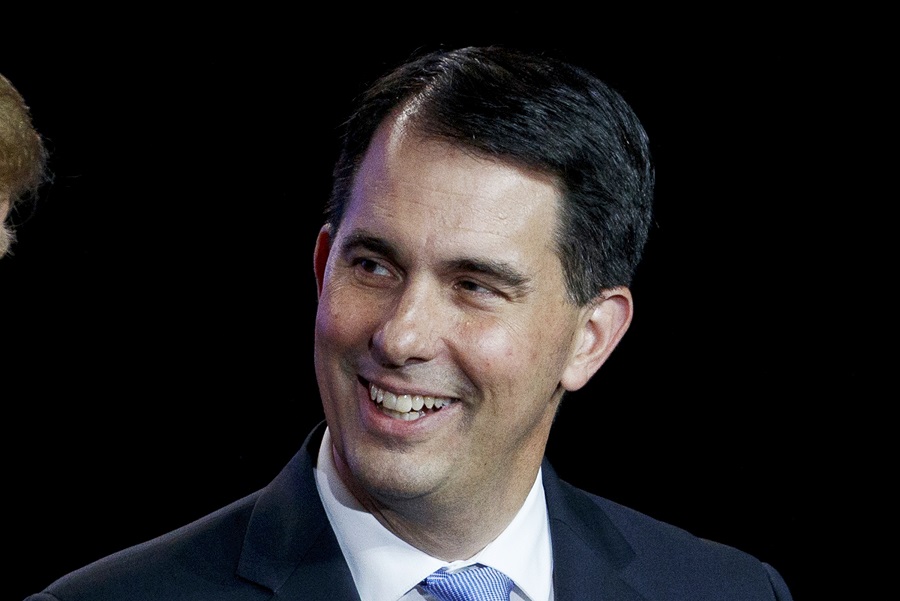 MADISON, Wis. (AP) — Demonstrators booed outgoing Wisconsin Gov. Scott Walker on Tuesday at a Christmas tree-lighting ceremony, drowning out a high school choir with their own songs in protest of a Republican effort to gut the powers of Walker’s Democratic successor.

The governor, wearing a Santa tie, appeared unfazed as he flipped the switch while one protester shouted “Hey Walker! Go home!” He left without taking questions from reporters about the bills being considered by the rare lame-duck legislative session.

Walker, who has signaled support for the measures, later tweeted that he “can handle the shouts,” but he urged protesters to “leave the kids alone.”

Democrats have derided the lame-duck lawmaking as a cynical attempt to preserve power after Walker’s re-election loss last month.

“If he wanted to put a stop to this, he could,” said Russ Hahn, a 53-year-old attorney holding a sign that said “GOP Grinch Steals Democracy.”

The fact that Walker was making no attempt to halt the effort “clearly indicates he wants to be able to control things outside the governor’s office for the next four or eight years,” Hahn said.

Later Tuesday, the public was ordered removed from Senate galleries after repeated warnings to be quiet. Spectators shouted “Shame!” and hurled complaints at senators, temporarily halting debate, as they walked out under police escort. Less than an hour later, Republicans said they would let people back in.

Walker burst onto the national political scene in 2011 with an aggressive anti-union agenda. Many of the same protesters who confronted him then returned to the Capitol on Tuesday — albeit in far fewer numbers. Protests reached 100,000 in 2011, but only a few dozen were on hand Tuesday.

Democrats vowed to do all they could to stop the measures, which would weaken both Democratic Gov.-elect Tony Evers and Attorney General-elect Josh Kaul.

Some hinted at filibusters or legal challenges and called the lame-duck session “illegitimate.” Former Democratic attorney general and Gov. Jim Doyle said the moves were unconstitutional.

Never in Wisconsin history “has an extraordinary session been used to deny the will of the people and take away powers from the newly elected governor and newly elected attorney general,” Democratic Rep. Chris Taylor said.

Meanwhile, Republican lawmakers met behind closed doors ahead of separate Assembly and Senate votes to send the bills to Walker.

A GOP-controlled committee approved the measures late Monday after a nine-hour public hearing where only one person testified in support of one provision. The panel rejected a proposal to move the 2020 presidential primary date from April to March amid nearly unanimous opposition from the state’s local election clerks.

Republican Rep. John Nygren, co-chairman of the committee, downplayed the proposals and said the goal was to establish balance in power between the Legislature and governor. Nygren said it was a positive step that would “bring us together to solve the problems of the state.”

Republican Assembly Speaker Robin Vos told reporters Tuesday that his constituents want him to protect everything the GOP has accomplished over the last eight years under Walker. The legislation, he said, ensures that Evers will have to negotiate with lawmakers and cannot unilaterally erase Republican ideas.

“We do not believe any one individual should have the opportunity to come in and with a stroke of the pen … eliminate laws passed by our Legislature,” Vos said, citing rules enacting voter photo ID, a key GOP initiative during Walker’s two terms.

The protests this year paled in comparison to 2011, when tens of thousands of people descended on the Capitol to oppose Walker’s anti-union agenda for weeks. Senate Democrats fled to Illinois, and Assembly Democrats filibustered for 60 straight hours in an unsuccessful attempt to stop Walker’s changes.

Republicans were poised Tuesday to complete their work much more quickly, even as Democratic Minority Leader Gordon Hintz refused to agree on time limits for debate. Assembly Republicans said they would vote in their chamber by midnight.

The proposals in Wisconsin would weaken the governor’s ability to put in place rules that enact laws and shield the state jobs agency from his control. Republicans also want to limit early voting to no more than two weeks before an election.

That would stop Evers and Kaul from fulfilling their campaign promises to withdraw Wisconsin from a multi-state lawsuit seeking repeal of the Affordable Care Act. They made opposition to that lawsuit a central part of both of their campaigns.

If many of the changes are challenged in court, opponents have said, the process could create even more gridlock in state government next year.