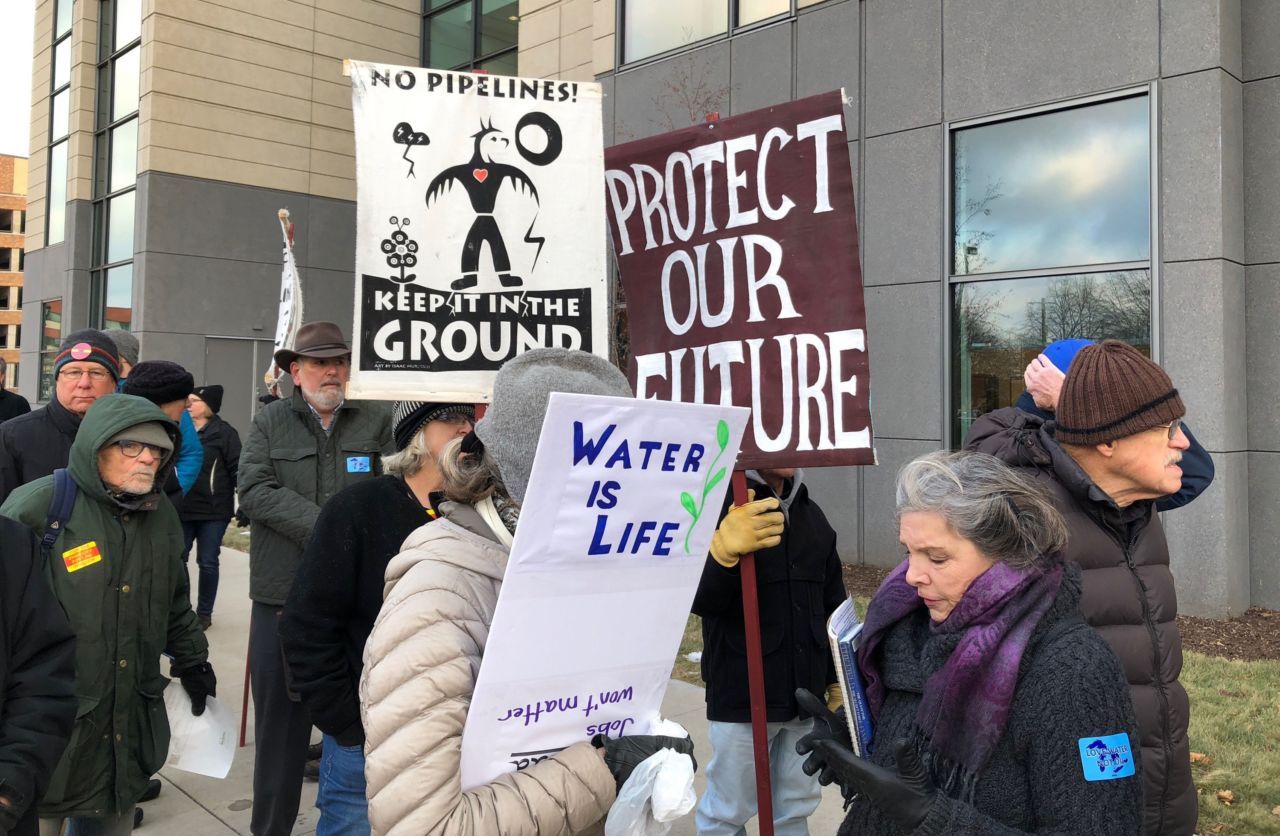 ST. PAUL, Minn. (AP) — Minnesota regulators reaffirmed their support Monday for Enbridge Energy’s proposal to replace its aging Line 3 crude oil pipeline across northern Minnesota, while dozens of protesters walked out of the overflow hearing to make a point about climate change.

The Public Utilities Commission unanimously rejected a motion by opponents to reconsider its previous decision to grant a certificate of need for the project. And the commissioners agreed that Calgary, Alberta-based Enbridge has met several conditions that they imposed when they approved the plan in June.

“Line 3 is a climate change disaster so we will stop Line 3,” several protesters in the main hearing room chanted early during the proceedings. Other opponents watching from an overflow room took up the chant and marched across the street to the Capitol, where they presented Gov.-elect Tim Walz’s staff with a recent gloomy U.N. report on climate change.

But the hearing continued, unlike a previous PUC hearing on the same issues in September that commissioners postponed until Monday after protesters disrupted it. Monday’s hearing was held in the Minnesota Senate Building, which has larger hearing rooms than the PUC’s headquarters, and it’s secured by state troopers, who were out in force.

The existing Line 3, which was built in the 1960s, carries Canadian tar sands oil from Alberta to Enbridge’s terminal in Superior, Wisconsin, clipping a corner of North Dakota along the way. It currently runs at about half its original capacity because it’s increasingly subject to corrosion and cracking. Enbridge says the replacement, which would follow a partly different route across Minnesota, will restore that capacity and ensure reliable deliveries of crude to Midwestern refineries.

On a series of 5-0 votes, the commissioners agreed that Enbridge has largely met the conditions they attached to their earlier approval, including requirements for insurance coverage against spills and financial assurances for covering the costs of removing the pipeline at the end of its life. Enbridge agreed to secure $940 million in insurance coverage and cover any additional cleanup costs itself. The company estimates the cleanup costs of a worst-case-scenario rupture at $1.4 billion.

The state Department of Commerce, which tried unsuccessfully to persuade the commission this summer that the project isn’t necessary, argued that Enbridge’s financial guarantees are inadequate, especially if the company should have to deal with more than one spill on its system at the same time. The rupture of a different Enbridge pipeline into the Kalamazoo River in Michigan in 2010 cost the company about $1.2 billion to clean up.

“Enbridge has demonstrated its … capacity to have extraordinary losses anywhere on its system that could wipe out all insurance for its entire operations,” said Julia Anderson, an attorney for the department.

Enbridge supporters, many of whom wore blue Minnesotans for Line 3 winter caps, arrived early and outnumbered the opponents, who mostly had to settle for seats in the overflow room.

Afterward, Nancy Noor, chairwoman of the Jobs for Minnesotans business-labor-community coalition, praised the commission for standing firm on its approval and letting the project move forward.

Winona LaDuke, executive director of Honor the Earth, and other opponents vowed to press forward with appeals and protests.