Say his name: Rookie WR Valdes-Scantling on rise for Packers 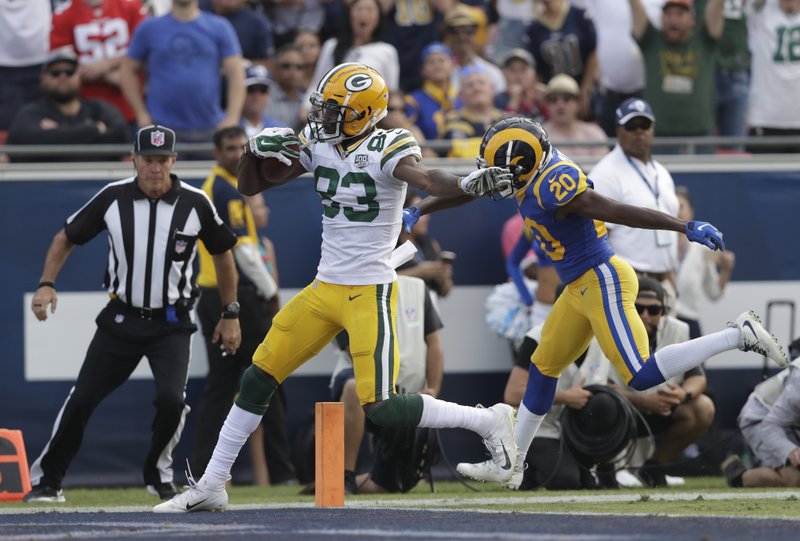 GREEN BAY, Wis. (AP) — Packers receiver Marquez Valdes-Scantling turned to Twitter to give a tutorial about how to pronounce his first name.

There is no K in my name. It’s not marKez. It’s Marquez. Quez. Please stop saying my name wrong guys 😅

“It happens all the time,” Valdes-Scantling said this week about the mispronunciation. “So there is no ‘k’ in my name.”

Keep making highlight-reel plays and announcers will catch on soon enough and get it right.

The fifth-round selection out of South Florida is about to get more consistent playing time after Geronimo Allison went on injured reserve this week. Green Bay hosts the Miami Dolphins on Sunday.

This is quite the impression that Valdes-Scantling has left the last few weeks, with breakaway speed and a 6-foot-4 frame that allow him to snare jump balls.

“The biggest thing is just him gaining the trust of (quarterback Aaron Rodgers) as fast as he has,” veteran wideout Randall Cobb said. “It’s really impressive that Aaron wants to come to him in certain situations. He’s making those plays for him.”

To the tune of 17 catches for 358 yards and two scores so far for Valdes-Scantling, plus a team-high 21.1 yards per catch. He has touchdown catches in two of his last four games, with 100 yards receiving in each of the other two games during that span.

The production increase is in part due to helping fill in for Allison and Cobb while each player missed a few games with hamstring injuries. Cobb is questionable again for the Dolphins game because of hamstring trouble.

That leaves more opportunities for Valdes-Scantling to be the second receiver behind Davante Adams.

The process of gaining Rodgers’ trust, though, isn’t easy. It requires more than just making catches.

“It’s not going to happen in one day. You’ve got to learn the plays, you’ve got to know the plays,” Valdes-Scantling said. “He’s going to quiz you in practice, so you’ve just got to know all those things. It just happens over time.”

Proof of the payoff came late in the third quarter of last week’s loss at New England, with the game tied at 17. Deep in Packers territory, Rodgers rolled right, where he quickly found two defenders trying to close in on him for a sack.

The two-time NFL MVP threw a high pass that traveled about 30 yards to Valdes-Scantling at around the 36. The rookie adjusted near the sideline to the throw while on the run. With a defender a couple steps behind him, Valdes-Scantling turned and jumped high for the catch .

He’s the breakout contributor of the three receivers taken by the Packers in the draft.

Fourth-rounder J’Mon Moore has just one catch for 10 yards. Sixth-rounder Equanimeous St. Brown has seven catches for 143 yards, and moves up in the depth chart behind Valdes-Scantling.

“At the end of the day, (Valdes-Scantling) has been given some opportunities, probably more than we all anticipated due to the injury, and he’s just delivered,” coach Mike McCarthy said. “So you can see with the success and the production he’s had, his confidence grows more and more each week.”