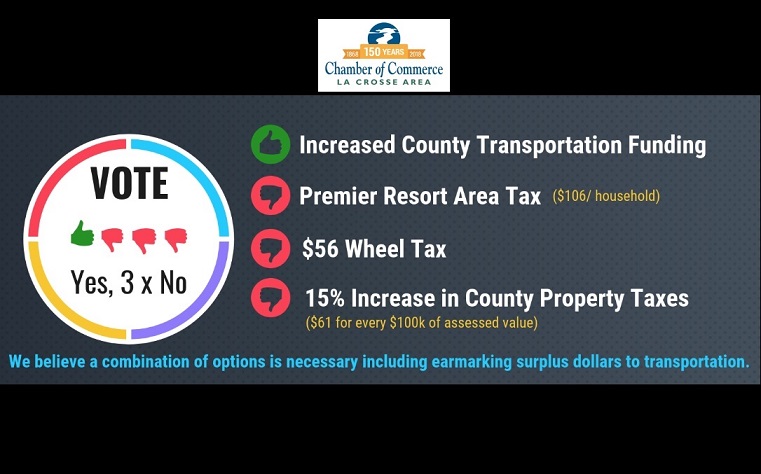 Add the La Crosse Area Chamber of Commerce to those opposing four advisory referendum questions on the Tuesday ballot in La Crosse County.

The Chamber agrees that the county’s roads need repairing but calls the options offered to pay for that, “extreme.”

In a message to members, Chamber executive director Vicki Markussen says the county, “needs to earmark new revenue to transportation and not to other initiatives.”

One of those initiatives especially appears to irk Markussen and the rest of the Chamber.

On the Chamber’s website there’s this message: “In Spring 2017 the County told taxpayers/voters there s not enough money for roads. In the Fall they learned of $500,000 in surplus sales tax revenue. They spent it on a homeless initiative. That’s not prioritizing transportation.”

The Chamber urges a “yes” vote on spending more on roads and A “no” vote on the three methods of raising taxes to pay for that.

Tuesday’s county referendums are all advisory and not binding.

The Chamber does not offer a position on whether to vote for the marijuana legalization referendum that’s also on county ballots.