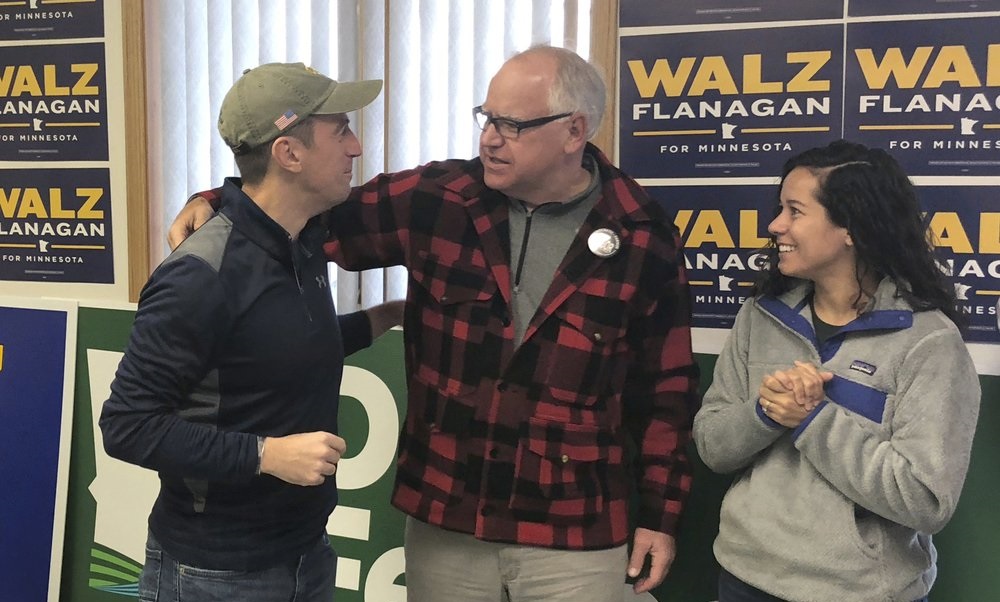 MANKATO, Minn. (AP) — As Democratic congressional candidate Dan Feehan stood before a cheering crowd alongside the man he hopes to replace, U.S. Rep. Tim Walz, their common theme was voter turnout. But the parallels between their resumes are striking.

Military service and teaching are touchstones for both Feehan and Walz, whose decision to give up his southern Minnesota seat to run for governor set up one of the most competitive congressional contests in the country. The toss-up race between Feehan and Republican Jim Hagedorn, the son of a former congressman, is seen as one of the few GOP opportunities to pick up a House seat.

Hagedorn is making his fourth run since 2010. He came within a percentage point of upsetting Walz in 2016 when President Donald Trump carried the district by 15 points. Both campaigns agree turnout is the key to victory.

At a get-out-the-vote rally in Mankato on Sunday, Walz told about 100 volunteers he “could not be prouder” that Feehan is the Democratic Party’s new “face forward” in southern Minnesota. And he said his young son and his buddies “found a hero in Dan Feehan,” whose commercials show him in combat gear.

Feehan was attending Georgetown University in 2001 when he saw the smoke rising over the Pentagon on 9/11. He says that motivated him to join ROTC. The Army sent him to Iraq for two combat tours, and his main job was blowing up roadside bombs.

He later taught at schools in Chicago and Gary, Indiana, then returned to the military as a civilian after graduate school, serving as acting assistant secretary of defense for readiness in the Obama administration.

Walz is a Minnesota National Guard veteran who taught and coached at Mankato West High School. He also taught on the Pine Ridge Indian Reservation in South Dakota. The retired command sergeant major is the highest-ranking enlisted soldier to serve in Congress.

To fire up his new troops, Feehan said America is at “a moment of chaos,” indirectly referring to the Pittsburgh synagogue massacre and the attempted mail bombings of media offices and people seen as Trump critics. “There is something out there that is dark, that is filled with hate,” he said. But he told his volunteers that when they’re out knocking on doors, they’re offering voters a message of hope on issues like health care and economic security.

“That’s how you win elections,” Feehan said. “Not with the dark money that’s flying on TV ads right now.”

Feehan said in an interview he wants to be an “independent voice” in a Congress that needs to be a check on power.
“That means working with President Trump when it makes sense for southern Minnesota but having the independence again to stand up to him when it does not,” he said.

Hagedorn vows to be a reliable “partner with the president.” His father, Tom Hagedorn, once represented part of the area, and he has spent much of his life on the fringes of Congress or trying to get elected to it. He worked as aide to Rep. Arlan Stangeland and in congressional liaison positions at the Treasury Department.

Trump backed Hagedorn and slammed Feehan as “extreme” at his recent Rochester rally. Hagedorn told Trump, “I want to go out to Washington and serve as a conservative reinforcement to partner with you to keep moving America in the right direction.”

The race has attracted nearly $13 million in outside spending, the most for any of Minnesota’s races.

It includes ads by the National Republican Congressional Committee tying Feehan to billionaire George Soros, a major liberal donor who received the first pipe bomb last week. Soros is frequently cast by some extremists as the alleged leader of a globalist Jewish plot. Rep. Steve Stivers, chairman of the NRCC, defended the ads as “factual” Sunday on NBC’s “Meet the Press.”

Walz saw it differently: “Let’s be very clear, the last ads running against Dan Feehan are anti-Semitic,” he told the Mankato crowd.

Hagedorn says he’ll barnstorm from one end of the district to the other until the polls close Election Day.