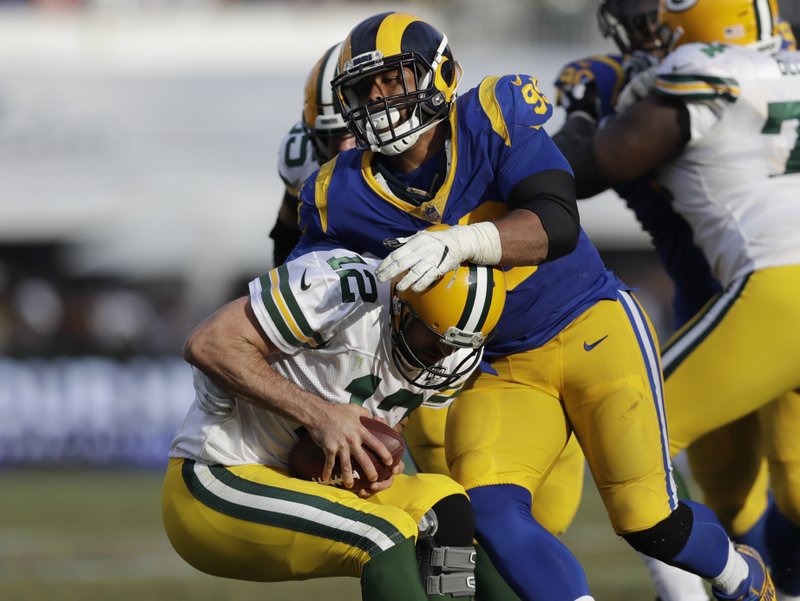 LOS ANGELES (AP) — Ty Montgomery’s fourth-quarter fumble on a kickoff return was only the final big blow to the Green Bay Packers’ hopes of knocking off the unbeaten Los Angeles Rams.

Montgomery’s mistake was far from the only error Sunday that left Green Bay’s half of the rowdy Coliseum crowd going home unhappy despite an occasionally inspired effort by their team.

“That play didn’t lose the game, but it definitely took away an opportunity for us to go down and win it,” Aaron Rodgers said of Montgomery’s fumble.

Other plays loomed just as large to Rodgers and coach Mike McCarthy after the Rams salted away their 29-27 victory without letting Rodgers touch the ball in the final 5:20.

The Packers were on the brink of a statement victory after rallying from a 10-point deficit late in the third quarter. Green Bay had a one-point lead and the ball with 6:49 to play, but the Packers only ended up making a statement about their own inconsistency.

“You got to play a fully complete game, and we didn’t do that,” said receiver Davante Adams, who had five catches for 133 yards.

A sequence in the second quarter fundamentally switched the momentum away from the Packers (3-3-1), who had built a 10-0 lead — the largest anybody has taken on the Rams all season long — shortly before halftime thanks to outstanding work on both sides of the ball.

“We came out with that energy,” Packers nose tackle Kenny Clark said. “We started really fast. Like I said earlier, I think we did a lot of good things. It’s just disappointing for us to lose the game.”

Sam Shields started the momentum swing against his former team when he tiptoed along the goal line to down a punt by Johnny Hekker, trapping the Packers at their 1. Green Bay’s next play was a run up the middle by Aaron Jones, and the Rams’ fearsome defensive front stuffed it for a safety.

Los Angeles awoke after that stop, both in the stands and on the field. Jared Goff’s offense immediately drove for its first touchdown in the final minute of the first half.

The Packers lamented losing that hard-earned momentum after a largely stellar defensive first half. Green Bay sacked Jared Goff five times, including twice by Clark, and had eight tackles for loss against LA’s powerhouse offense.

“They’ve had the success they’ve had with a lot smoke and mirrors, good play-calling, speed and misdirection,” Packers linebacker Clay Matthews said. “We came out and made it kind of dirty and grimy, really got after them, hit the quarterback. Obviously they found their footing in the second half, maybe late in the first half. But then we put it back on them at the end of the game. We did just enough for our offense to get down there. It really is a shame the way in which we dropped that game. You’d like to think, if we see these guys again … but at 3-3-1, we need to start winning these games.”

Rodgers still had the ball with the chance to lead a clock-draining drive with 6:49 left. Instead, the Rams lost 6 yards on three plays before a 25-yard punt by JK Scott. The Rams got a go-ahead field goal on the short field, and Montgomery fumbled moments later.

The Packers realize they’re gaining a reputation as a team that plays to the level of its opposition. As they reach the midpoint of their season, they know they’re running out of time to put together full games — particularly since their next game is at mighty New England.

“I don’t understand that, honestly,” Clark said. “In my mind, I swear, if we play games like that, we’re going to win a lot of games. I don’t really know how else to explain it. We’ve got to come out there like that every game. I really feel like we can get teams on their heels, and with the offense that we have, we can put up points and get up on guys easy.”