Packers turn to rookie Looney to prepare for Rams, Darnold 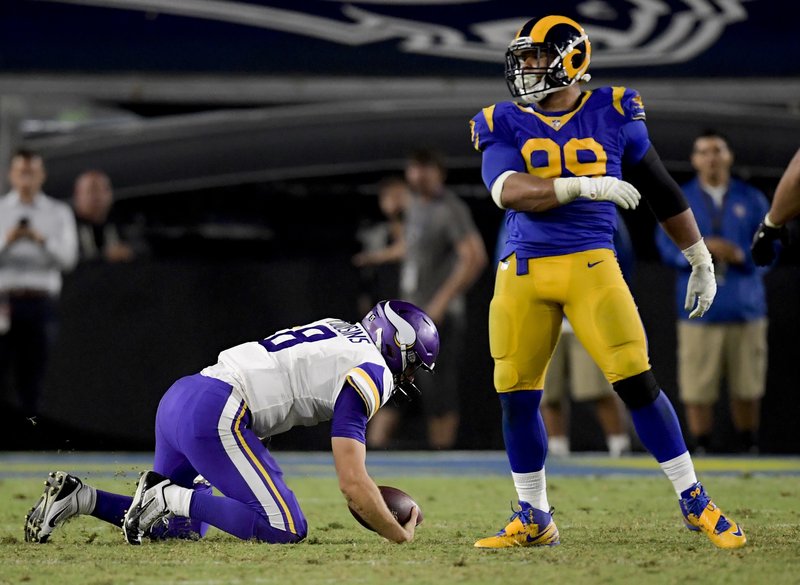 Other than sharing jersey No. 99, Donald and Looney have little in common. Looney was one of Green Bay’s seventh-round draft picks this year, failed to make the roster and has been toiling on the practice squad. Donald, meanwhile, is the reigning AP Defensive Player of the Year and leads the NFL with eight sacks.

Still, Looney made for a solid Donald stand-in for the Packers this week.

“I think Looney actually did a really good job this week trying to emulate Donald,” left guard Lane Taylor said, “and being that elusive, athletic, active kind of guy for us.”

At 6-foot-1 and 285 pounds, Donald is equal parts speed and strength, tenaciousness and technique. The Rams’ first-round pick in 2014, his 4.68-seconds time in the 40-yard dash before that draft is tied for the fastest for any interior defensive lineman in the history of the NFL combine.

That speed is almost impossible to mimic on the practice field. But, Looney’s 4.89 time was among the fastest for an interior defensive lineman at this year’s combine.

“I think the biggest thing is you’ve got to have a guy fresh in there going full speed all the time,” center Corey Linsley said. “Looney was in there and did a heck of a job. He put in a good work week. He did a hell of a job. Kudos to him.”

No matter how opponents prepare during the week, Donald has been a terror.

After posting 11 sacks and five forced fumbles last season, he had four sacks in last week’s rout of San Francisco, the most by any player in the league this season. Rams defensive coordinator Wade Phillips moves him up and down the defensive line. Against the 49ers, he had sacks when lining up at left defensive end, left defensive tackle and right defensive tackle.

“He’s unique, there’s no doubt about it,” Packers coach Mike McCarthy said. “He has the whole deal. He’s so powerful and quick. What he’s able to accomplish in phone-booth football is the challenge. He’s got great power (and) quickness, and he’s obviously very much in tune with what the other guy is doing. I think he has very good instincts and awareness, and his anticipation is very high.”

Green Bay has struggled to protect the quarterback this season. Playing through an injured left knee, Aaron Rodgers has been sacked 19 times in six games and Green Bay is No. 23 in sack percentage. Donald, a Pro Bowler following each of his four seasons, will provide a major challenge for the linemen, quarterback and coaches.

Coming off their bye week, Donald has been at the forefront of the coaches’ thoughts as Green Bay enters a challenging a five-game stretch against the Rams, Patriots, Dolphins, Seahawks and Vikings – teams with a combined record of 23-10-1.

“We’ve given a lot of thought to every single pass route that we put up on the board and we draw up and we diagram and we give to the players,” offensive coordinator Joe Philbin said. “We want to know where 99 is. We want to know how we’re going to handle 99.”

So does every offense, but Donald has sacked a lot of game plans in his four-plus seasons.

“You’ve got to be aware of where he’s at,” Rodgers said. “He’s one of the more dominant players that the league has seen in a number of years. . He’s a menace inside. You’ve got to find a way to try to get bodies on him, slow him down and get him some different looks.”

NOTES: The Packers are relatively healthy coming off their bye-week break. Rodgers is off the injury report, as are receiver Geronimo Allison (hamstring) and cornerback Jaire Alexander (groin). Receiver Randall Cobb (hamstring) is questionable but fully participated in practice. Cobb missed the last three games, while Allison and Alexander missed the last two. … After practice, the team left for Los Angeles.