Happ, Badgers see defense as key to returning to NCAAs 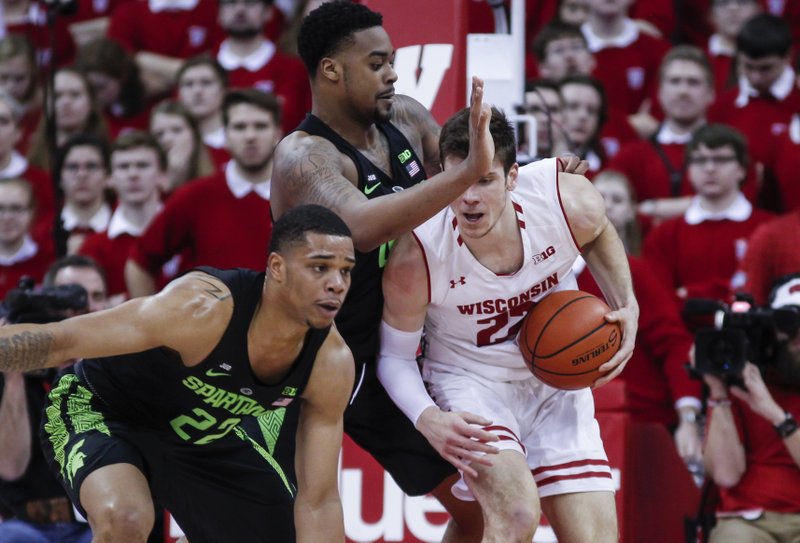 MADISON, Wis. (AP) — The first Wisconsin player to jog on to the court for practice was Ethan Happ, beating the next teammate by about a couple minutes.

There is no time to waste if one of the country’s premier big men wants to lead the Badgers back to the NCAA Tournament.

With all five starters returning, Wisconsin is determined to start a new streak after a rare losing season kept them out of the tourney for the first time in nearly two decades.

Finishing 15-18 to end a stretch of 19 straight NCAA appearances, coach Greg Gard’s squad can use an encouraging, season-ending stretch as a confidence boost going into 2018-19. First and foremost, the defense was a lot better as Wisconsin won five of its last eight games.

“The way we ended last year was very encouraging,” Happ said. “We got so much better defensively, then we magically won more games.”

No Badger is more important than Happ, the 6-foot-10 forward who can do just about anything in the paint.

His smooth and deceptive post moves frustrate defenders. He can handle the ball in transition. He’s just as dangerous on defense with an ability to get steals and poke away entry passes.

A four-year starter, Happ (17.9 points, 8.0 rebounds last year) is climbing the charts in several categories in the Wisconsin record book. He took part in NBA draft workouts to test his stock before returning to school.

But getting the Badgers back to the NCAAs as a senior would be rewarding.

“I think the experiences, how we had to grow last year, how we were able to turn the corner in February and play much better, was a good sign and a good springboard,” Gard said.

The season opens on Nov. 6 against Coppin State.

Brad Davison (12.1 points) turned into the emotional sparkplug of the team as a freshman. He’s the type of in-your-face, hard-nosed guard that teammates love and opponents might find frustrating to play. Best of all for Wisconsin is that he’s healthy again after having surgery in the offseason on a left shoulder injury that bothered him most of last year.

“He’s a natural leader,” assistant coach Dean Oliver said. “He wants to win more than anybody. That’s how he’s built. It’s contagious, the rest of the team kind of feeds off that.”

The backcourt gets two key contributors back in D’Mitrik Trice and Kobe King, who were each lost in early December with season-ending injuries. As a sophomore, Trice (foot) was averaging 9.4 points and 31 minutes a game. King (left knee) was showing signs of being able to provide scoring off the bench as a freshman. They give Gard more options to mix lineups. The NCAA approved medical hardship waivers for both players to gain back a year of eligibility.

They join Davison and junior Brevin Pritzl has mainstays in the backcourt. A 3-point shooter, Pritzl overcame a midseason shooting slump in part by finding other ways to contribute on the floor.

The team’s best athlete might be 6-foot-5 senior Khalil Iverson, who relishes opportunities to guard an opponent’s best scorer. He’s also adept at slipping into open spots along the baseline for easy buckets when teams decide to double Happ. Getting better from the perimeter would also benefit Iverson after he missed all 24 of his 3-point attempts last year.

The upside for the Badgers having to play so many new or less experienced players last year is most of those newcomers are comfortable with their roles. They’re familiar with the expectations. The Badgers return 95 percent of their scoring, and 92 percent of minutes played.

As expected, NBA scouts told Happ to work on two flaws: shooting better from the foul line and developing a mid-range jumper to create better spacing on the floor. Improvement in either area will also help Wisconsin this season.

“I thought going into it, it was going to be win-win. It was very educational for him,” Gard said. “I think it helped elevate his game.”