Jubilant customers light up as pot sales begin in Canada 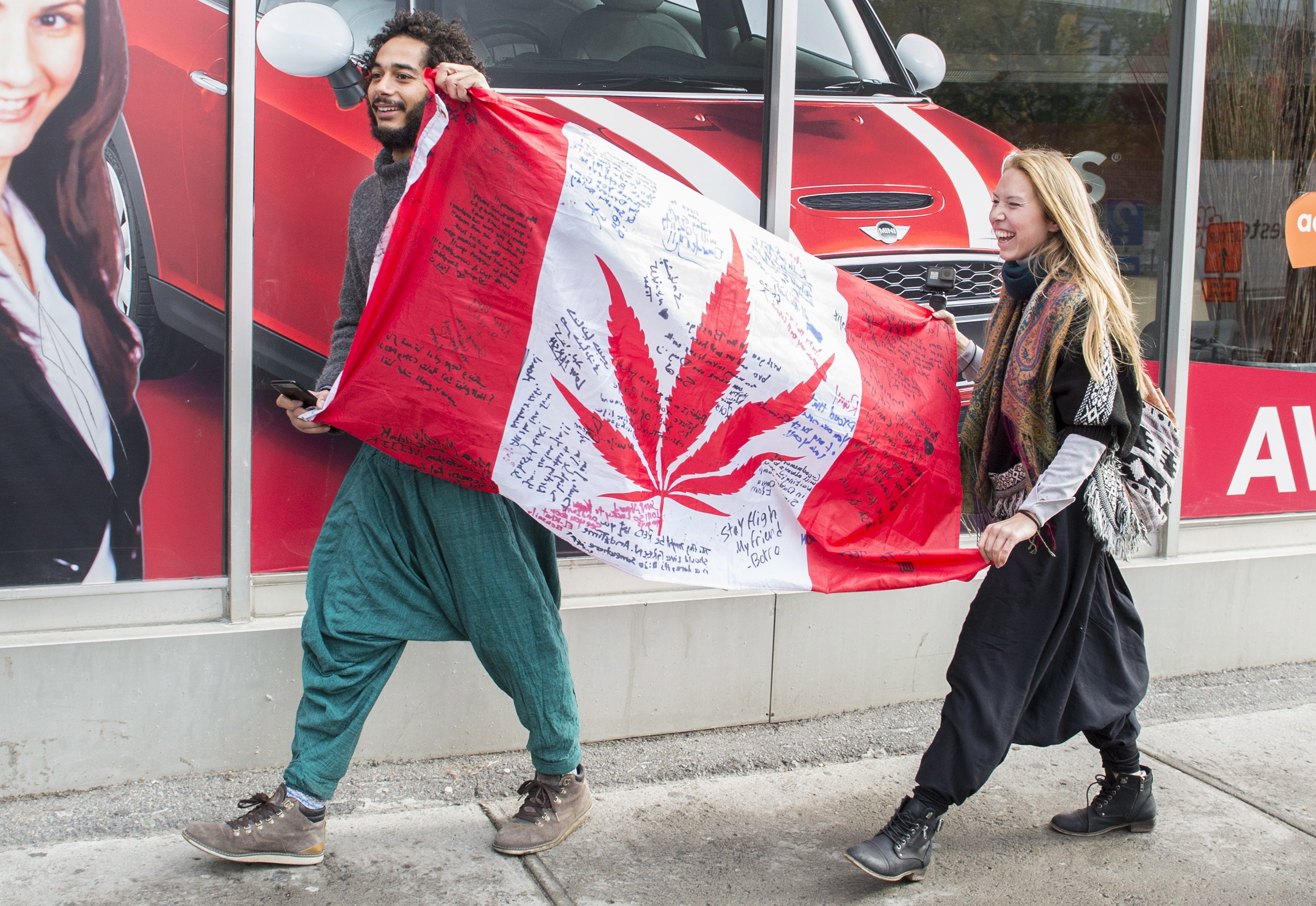 In Toronto, people smoked joints as soon as they rolled out of bed in a big “wake and bake” celebration. In Alberta, a government website that sells pot crashed when too many people tried to place orders.

And in Montreal, Graeme Campbell welcomed the day he could easily buy all the pot he wanted.

In the past, it was “hard to find people to sell to me because I look like a cop,” the clean-cut, 43-year-old computer programmer said outside a newly opened pot store.

He and his friend Alex Lacrosse were smoking when two police officers walked by. “I passed you a joint right in front of them and they didn’t even bat an eye,” Lacrosse told his friend.

Festivities erupted throughout the nation as Canada became the largest country on the planet with legal marijuana sales. At least 111 pot shops were expected to open Wednesday across the nation of 37 million people, with many more to come, according to an Associated Press survey of the provinces. Uruguay was the first country to legalize marijuana.

Ian Power was first in line at a store in St. John’s, Newfoundland but didn’t plan to smoke the one gram he bought after midnight.

Tom Clarke, an illegal pot dealer for three decades, opened a pot store in Portugal Cove, Newfoundland, and made his first sale to his dad. He was cheered by the crowd waiting in line.

“This is awesome. I’ve been waiting my whole life for this,” Clarke said. “I am so happy to be living in Canada right now instead of south of the border.”

By afternoon, Clarke had sold his entire cannabis supply and had to turn away customers.

The start of legal sales wasn’t the only good news for pot aficionados. Canada said it intends to pardon everyone with convictions for possessing up to 30 grams of marijuana, the newly legal threshold.

“I don’t need to be a criminal anymore, and that’s a great feeling,” singer Ashley MacIsaac said outside a government run shop in Nova Scotia. “And my new dealer is the prime minister!”

Medical marijuana has been legal since 2001 in Canada, and Prime Minister Justin Trudeau’s government has spent the past two years working toward legalizing recreational pot to better reflect society’s changing opinion about marijuana and to bring black market operators into a regulated system.

Corey Stone and a friend got to one of the 12 stores that opened in Quebec at 3:45 a.m. to be among the first to buy pot. Hundreds later lined up.

“It’s a once-in-a-lifetime thing — you’re never ever going to be one of the first people able to buy legal recreational cannabis in Canada ever again,” said Stone, a 32-year restaurant and bar manager.

The stores have a sterile look, like a modern clinic, with a security desk to check identification. The products are displayed in plastic or cardboard packages behind counters. Buyers can’t touch or smell the products before they buy. A small team of employees answer questions but don’t make recommendations.

“It’s a candy store, I like the experience,” said Vincent Desjardins, a 20-year-old-student who plans to apply for a job at the Montreal shop.

Canadians can also order marijuana products through websites run by provinces or private retailers and have it delivered to their home by mail.

At 12:07 a.m., the Alberta Liquor and Gaming Commission tweeted: “You like us! Our website is experiencing some heavy traffic. We are working hard to get it up and running.”

Alberta and Quebec have set the minimum age for purchase at 18, while other provinces have made it 19. Rules vary in different jurisdictions about whether people can smoke pot outside.

Fire and Flower Chief Executive Trevor Fencott brought his wife and three children — 16, 13 and 6 — for the opening of a company pot shop in Edmonton, even though the law forbid his children from going inside.

“Legalization is about daylighting a lot of stuff that used to be in the shadows,” he said. “Our kids are going to inherit this system, for better or worse, and I thought it was important for them to see this sea change in Canadian society.”

No stores will open in Ontario, which includes Toronto. The nation’s most populous province is working on its regulations and doesn’t expect stores to operate until spring. The Pacific Coast province of British Columbia has just one store open, but it’s not in Vancouver, one of Canada’s largest cities.

A patchwork of regulations has spread in Canada as each province takes its own approach within the framework established by the federal government. Some provinces have government-run stores, others allow private retailers, and some have both.

Canada’s national approach allows unfettered banking for the pot industry, inter-province shipments of cannabis and billions of dollars in investment — a sharp contrast with prohibitions in the United States, where nine states have legalized recreational sales of pot and more than 30 have approved medical marijuana.

Many Americans are likely to cross into Canada to buy and use pot, but they can’t take it back. U.S. border authorities have issued reminders that travelers could face arrest if caught with it.

Bruce Linton, CEO of marijuana producer and retailer Canopy Growth, claims he made the first sale in Canada — less than a second after midnight in Newfoundland.

“It was extremely emotional,” he said. “Several people who work for us have been working on this for their entire adult life and several of them were in tears.”

Cam Battley, chief corporate officer of Aurora Cannabis, also one of Canada’s largest cannabis companies, said it’s not every day you get to be involved in the start of a new industry.

“The world trusts Canada to be a leader in this,” he said. “We’re not known as wild and crazy. We’re known for good public policy and I think they will follow our lead.”