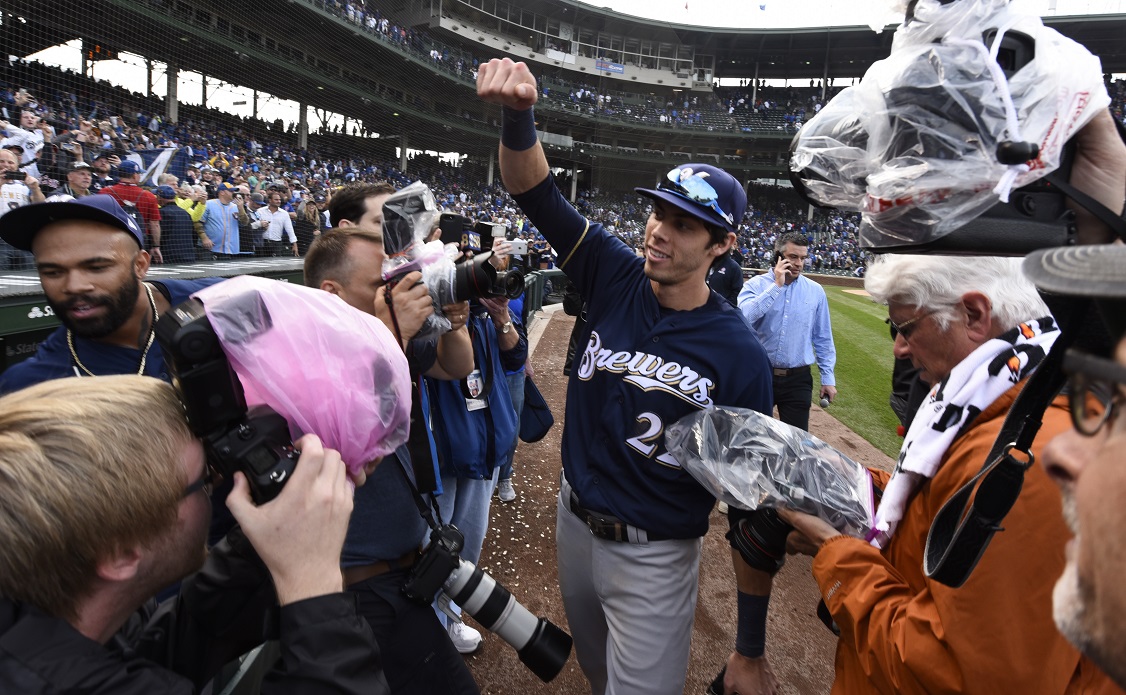 MILWAUKEE (AP) — When Brewers slugger Christian Yelich takes the field against the Los Angeles Dodgers, he’ll have one group of Milwaukee fans rooting especially loud for his success: Serbian-Americans.

The 26-year-old MVP candidate’s banner year has earned him plenty of new fans, including Serbians who are just now becoming aware of his heritage. Yelich’s paternal grandfather was Serbian.

“Everybody is seriously super-stoked and really happy,” said Sinisa Torbica, 50, whose parents immigrated to Milwaukee from Serbia in the 1960s.

Torbica, who makes a living as a translator, said he long thought Yelich might be of Serbian descent but wasn’t sure because the Americanized spelling differs from the more usual Jelic surname. Torbica said it was “fricking awesome” when a friend told him about Yelich’s ancestry last year. His own friends, he said, feel the same.

“They’re just kind of like awestruck,” Torbica said. “They’re like, ‘Wow, I can’t believe it. He’s Serbian, are you kidding me? MVP?’ It’s unbelievable.”

Yelich said he has never visited Serbia or fully researched his heritage, but he feels “pride in it.”

“Any time you can have an impact on anybody’s life in a positive direction, to bring happiness to the community or a certain group of people, you don’t take that lightly as a team, as a player,” he said.

The Brewers acquired Yelich from the Miami Marlins in a trade this past offseason and he went on to win the National League batting title with a .326 average. He hit 36 home runs and had 110 RBIs, just missing the Triple Crown — a rare feat last accomplished by Miguel Cabrera for Detroit in 2012.

Now, Yelich is a frequent topic of conversation among Milwaukee’s small, tight-knit Serbian community that likes cheering for athletes who have a connection to home, said Steve Petrovic, the president of the American Serb Hall on the city’s southwest side. Petrovic said it’s the same adulation Serbians feel for athletes like tennis superstar Novak Djokovic and retired NBA player Vlade Divac.

“When you’re within the Serbian community, that kind of stuff is talked about — ‘Did you see Yelich had three hits the other night?’” Petrovic said. “That is very commonplace.”

Serbians’ migration to Milwaukee began in the late 1800s, driven by poverty and overpopulation in Eastern Europe, said John Gurda, a Milwaukee historian and author.

They settled in Milwaukee’s Walker’s Point neighborhood, near the city’s south side, and largely worked industrial jobs, Gurda said. Another wave of Serbian immigrants began arriving in Milwaukee in the 1980s during the wars in Sarajevo and the Bosnian conflict.

The St. Sava Serbian Orthodox Cathedral, the St. Sava Orthodox School and Serb Hall have become important gathering places for Serbians, who number about 4,000 in the area, according to census data.

“I can guarantee you that if you go out to Serb Hall or the school, they know (about Yelich) and they’re proud,” Gurda said.

That pride is part of Serbians’ nationalistic streak and their “special draw” toward cheering on their own when they succeed, said Mike Uzelac, 63, former president of Serb Hall.

“We try to support each other, and root for each other whether it’s basketball, football, acting, whatever,” he said.

Now that more Serbians are learning about Yelich’s heritage, they want to make sure that others know it, too.

“Now I’m going to be bringing it up to all my friends,” said Ilija Stojsavljevic, 47, an engineer from the Milwaukee suburb of Cudahy. “I will be bringing that up whenever possible.”