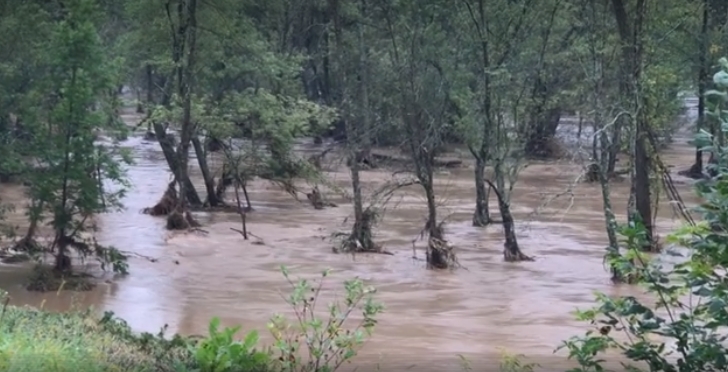 This year’s surge of water didn’t make the door. Instead, the high-water mark can be seen in the rafters of the shelter’s roof where sprigs of grass remained three weeks after the Kickapoo River went 3 feet higher than has ever been recorded.

The record flood of late August has left 37 homes uninhabitable, reached Main Street businesses located on a rise in the downtown that have been spared water damage in the past and pushed some events and exhibits for last month’s 60th Gays Mills Apple Festival to the Crawford County Fairgrounds. The event featured food, music and a Sunday parade, all to benefit area nonprofits.

Flooding is a part of the bargain and a gamble for those who live, own businesses or attend church in the village’s low-lying neighborhoods. Since 2008 some businesses, residents and village offices have abandoned the old downtown for higher ground along Highway 131 on the village’s north side. But for those that remain, last month’s flood has brought more discussions about the future of the valley that sits below The Ridge, home to some of the largest apple orchards in the region.

“We don’t know what’s going to happen,” Harry Heisz, a lifelong resident, firefighter and village president, told the Wisconsin State Journal . “A lot of people want to move out where they didn’t (want to move out) before.”

Of the 57 homes in the valley, 50 had flood damage, including some that had their foundations raised years ago. As many as 30 of those homes may need to be removed, Heisz said. Officials with the Federal Emergency Management Agency were recently scheduled to be in the region, but it’s unclear what kind of money might be available to assist those who need repairs or who want to move to higher ground, Heisz said.

Many don’t have flood insurance because the annual premiums can range from $1,600 to $3,000, above and beyond the regular insurance that covers, for instance, fire and hail damage. Heisz thinks the village may have $10 million in flood damage.

“We didn’t expect 3 feet of water going above from what our record was,” Heisz said. “If the two dams wouldn’t have broke north of us they wouldn’t have had water in their houses.”

In Gays Mills, Heisz said about 10 businesses remain in the valley. The laundromat remains closed but beer is again being served at Halver’s Town Tap and J&J’s on Main, the only two taverns in the village. The Red Apple Inn restaurant was shuttered in early 2017 and the Kickapoo Locker closed its meat business about nine months ago.

Joe Brandt has owned and operated the Village Greenhouse for nearly 35 years. The front of the business was a bounty of color recently thanks to white and orange pumpkins, pots of chrysanthemums and hanging baskets filled with flowers. Brandt had 17 inches of water in his business for the first time but he has no plans to vacate his downtown perch, although he’s now looking for more wall space to hang flood photos with those from past years.

“I was required by law to build this place 3 feet above the flood plain 34 years ago and I’ve never had a drop in here,” said Brandt, 60, as Carole King music played in the background.

“I’m too old. What am I going to do, move? The place is paid for. Or at least it was. For me to move the whole operation it would cost me $100,000. But believe me, as we were putting it all back together I thought to myself, ‘I wonder if I’m a fool.’ But this is my livelihood.”

It’s a different story just a few doors away at the Kickapoo Exchange Natural Foods Cooperative Grocery. Since its founding as a food buying club in 1975, the business has been twice destroyed by fire. August’s flood issued a soaking blow that destroyed about $6,000 worth of food products after about 18 inches of water inundated the building, constructed in the early 1990s.

The hardwood floors may need to be torn up to remove moisture underneath while all of the wainscoting that rims the base of the walls has been removed and has been laid out to dry on shelves that once held organic and natural foods. For now, the business has relocated to higher ground in the village-owned Mercantile Center, created after the 2008 floods.

The board of directors for the co-op and its 100 or so member households are weighing their options. They include moving the building to higher ground, abandoning the building in favor of existing space elsewhere or building out of the flood plain.

“It’s not really habitable and the consensus is that most members don’t want to stay in the flood plain down on Main Street,” said Bob Van Hoesen, the co-op’s president and a civic leader in the village. “The risk and the stress of being in the area where it could be flooded is just too great.”

The 15,600-square-foot Mercantile Center is home to a mix of businesses, some that relocated from Main Street. Tenants include barber Robert E. Lee, a hair salon, insurance company, the Crawford County Independent newspaper, a second-hand clothing store and a food pantry. A combination Cenex fuel station and The Marketplace grocery store are just to the north while a building that houses the village offices, library and a community kitchen are across Highway 131.

The Kickapoo Exchange’s retail floor on Main Street was 1,300 square feet but the Mercantile Center space is 1,900 square feet. However, there is limited shelving, most of the food items are displayed on folding tables and the non-refrigerated produce section was limited last week to a half-bushel of potatoes, a small basket of garlic and a single butternut squash. The refrigeration and freezer spaces are limited to two stand-up units that are smaller than most found in a typical home.

The former store had a full produce section, a three-door freezer, walk-in cooler and a prep area with a sink.

“There’s a lot of things that we’re running out of but I don’t have sinks or the right coolers and the right receiving spaces to start reordering,” said Denise Benoit, the co-op’s manager since 2013. “We were very well equipped in that small space (on Main Street) and we had a very good selection. I’d like to get back to that as soon as we can.”