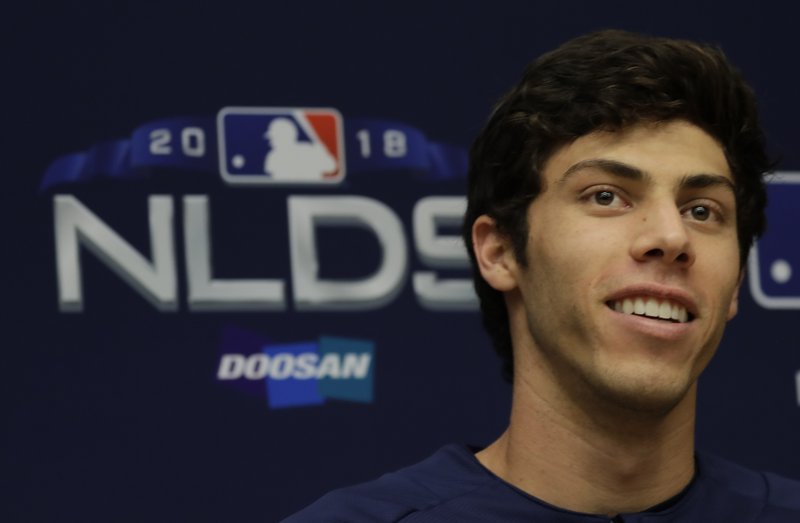 MILWAUKEE (AP) — With every home run and big hit, it’s getting more difficult for Christian Yelich to go out in Milwaukee without being recognized.

It didn’t stop the potential National League MVP from making a run to the supermarket for groceries, so his mother could make his favorite dish when she visited recently.

Taco night must go on for the Milwaukee Brewers’ All-Star outfielder and the rest of his family.

“So actually he went to the market and bought everything. I sent him a list, so when I got there it was all ready to go and I just had to cook,” his mother, Alicia Yelich said.

She said that the increased attention isn’t getting to her son’s head, even with a late-season push for the Triple Crown that fell just short.

The spotlight will shine brighter on Thursday when Yelich makes his postseason debut when the Brewers host the Colorado Rockies in Game 1 of their National League Division Series.

The 26-year-old Yelich is known for his humility and even-keeled demeanor, as much as his exploits at the plate for the Brewers. It’s a lesson handed down in the family.

Actually, Yelich has hit for the cycle twice this year, the first major leaguer to do so in one season against the same team, the Cincinnati Reds.

Last week against Detroit, Yelich made the first curtain call of his career after hitting his second home run to break a tie in the seventh inning of a 6-5 win.

It was about as close as Yelich has come to showing emotion.

“First one ever, so I don’t really know what to do,” he said then.

The loud fans at Miller Park chanted “MVP! MVP!” after the solo shot. He obliged with a brief appearance, lifting his helmet in the air about halfway up the dugout steps.

“Everyone was yelling at me to get up there, so I went up there really quick and went right back down,” he said.

Opponents are impressed by the demeanor, too. Rockies manager Bud Black got to talk to Yelich for a little while at the All-Star Game in July.

“You can’t engage with everybody, but I found time to engage with him,” Black said on Wednesday. “And what a nice kid — I mean, really, really great to talk to, and really in a way humble and sort of shy, right?

“That’s sort of how I got it. But what a great kid. So I’m very happy for him,” Black said.

Yelich hit an NL-best .326 to become the Brewers’ first batting champion. He finished tied for third in home runs (36) and tied for second in RBIs (110)

He’s the favorite in the NL MVP race after batting .367 with 25 homers and 67 RBIs in 65 games after All-Star break. His second-half surge is a big reason why the Brewers won the NL Central, making their first playoff appearance since 2011.

Asked if success had changed her son, Alicia Yelich said, “Cristian? No, no.”

“He’s very even-keeled,” she said. “And being even-keeled helps to be successful at this game.”