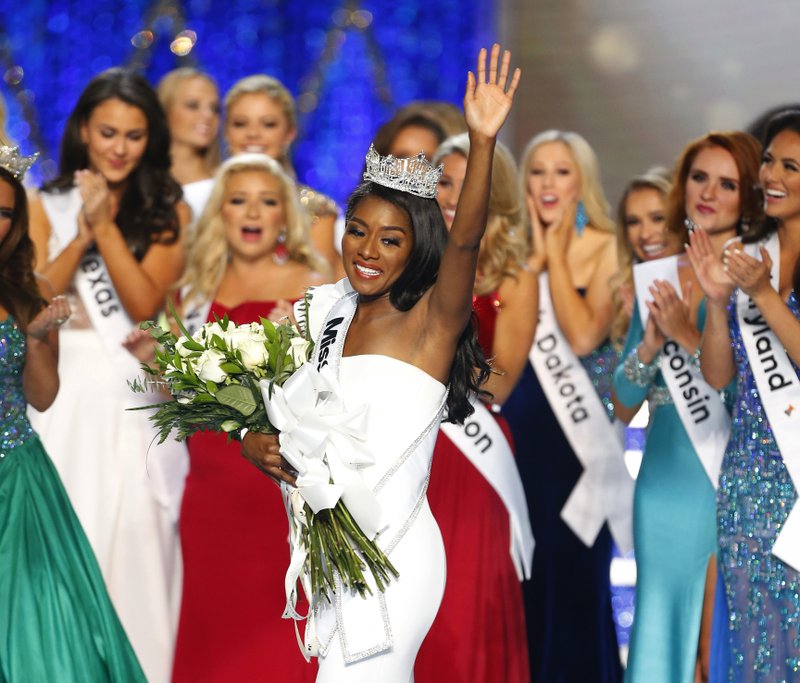 ATLANTIC CITY, N.J. (AP) — The first woman to win the Miss America crown without having to don a swimsuit says she’s glad she didn’t have to.

Nia Imani Franklin, who won the title Sunday night in Atlantic City while competing as Miss New York, said the changes in the 98-year-old pageant are a welcome modernization.

Meeting reporters soon after winning the crown, Franklin said she’s glad there was no swimsuit competition because it enabled her to eat a little more.

“These changes, I think, will be great for our organization,” she said. “I’ve already seen so many young women reaching out to me personally as Miss New York asking how they can get involved because I think they feel more empowered that they don’t have to do things such as walk in a swimsuit for a scholarship.

Franklin won a $50,000 scholarship along with the crown in the first Miss America pageant to be held without a swimsuit competition.

She said during her onstage interview that she was one of only a small number of minority students in school growing up, but used her love for music and the arts to grow and fit in.

The judges narrowed the field of 51 candidates during the pageant Sunday night from Jim Whelan Boardwalk Hall.

The decision to drop the swimsuit competition created a good deal of controversy and criticism of current Miss America leadership. Minutes before the nationally televised broadcast began, a comedian warming up the crowd mentioned that there would be no swimsuit competition this year, and was met with loud boos in the hall.

The swimsuits were replaced by onstage interviews, which have generated attention-grabbing remarks from contestants regarding President Trump, and NFL player protests, among other topics.

Behind the scenes, a revolt is underway among most of the Miss America state organizations who demand that national chairwoman Gretchen Carlson and CEO Regina Hopper resign.

The former Miss America, Cara Mund, says the two have bullied and silenced her, claims that the women deny.

Upon taking over at the helm of the Miss America Organization last winter following an email scandal in which former top leaders denigrated the appearance, intellect and sex lives of former Miss Americas, Carlson and Hopper set out to transform the organization, dubbing it “Miss America 2.0.”

Unhappy with how the swimsuit decision was reached, as well as with other aspects of Carlson and Hopper’s performance, 46 of the 51 state pageant organizations (the District of Columbia is included) have called on the two to resign.

Mund only appeared at the very end of the pageant before the next winner was crowned. She was not allowed to speak live; instead a 30-second taped segment of her speaking was broadcast.