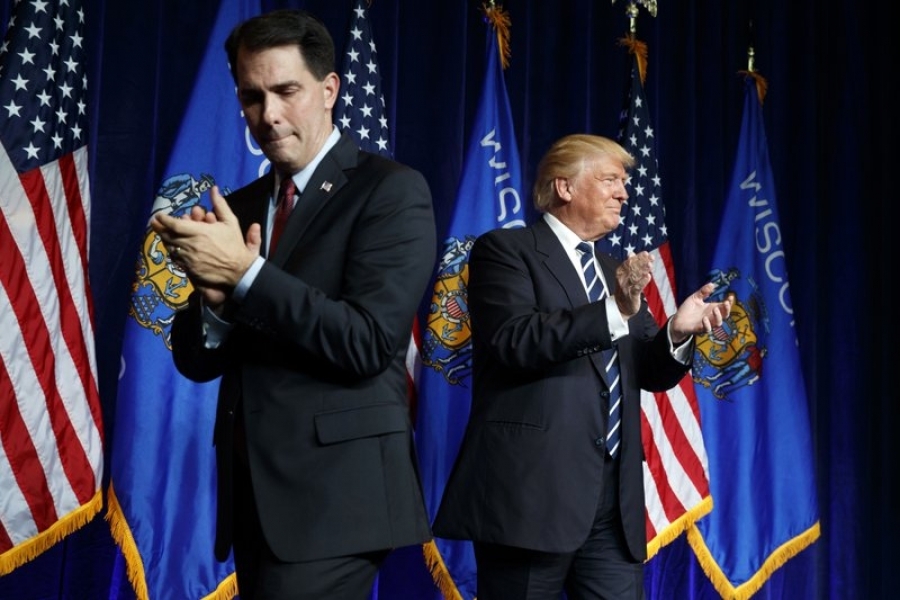 MADISON, Wis. (AP) — Republican Gov. Scott Walker will have to defeat Wisconsin’s top education official to win a third term, while U.S. Sen. Tammy Baldwin faces a longtime state legislator as she tries to keep the seat under Democratic control.

Both Republicans are closely tied to President Donald Trump, who tweeted enthusiastic support for Walker this week, in a state that Trump barely won in 2016 and where polls show a majority of voters disapprove of the job he’s doing.

Tony Evers, a 66-year-old cancer survivor and state superintendent, won the eight-person Democratic gubernatorial primary by a roughly 2-1 margin. On the Senate side , state Sen. Leah Vukmir beat former U.S. Marine Kevin Nicholson by roughly 10 points for the chance to take on Baldwin in what is the most expensive Senate race in the country to date.

Evers, who is in his third term as state superintendent and has faced concerns from Democrats that he’s uninspiring, promised he will “take the fight” to Walker.

“I am who I am,” Evers said. “I will take the fight to Scott Walker, but I will also be equally passionate about the issues. I never believe that shouting is necessary or that talking loud is connected to leadership.”

Walker, in a move to rally his supporters, has been warning for months about a blue wave coming to Wisconsin. The Wisconsin Republican Party announced a $500,000 attack ad against Evers on Tuesday night. Walker was to begin a statewide tour on Wednesday.

“The choice is simple: do we take a giant step backwards and watch more of our graduates flee the state to pursue their careers or do we continue to move forward as we keep Wisconsin working for generations to come,” Walker tweeted.

Democrats who voted for Evers said education issues were a priority.

Brenda Autz, a Middleton-Cross Plains School District teacher who lives in Lodi, voted for Evers because she thought he had the best chance at unseating Walker. But she wasn’t optimistic he could do that.

“I was sure four years ago (that Walker would lose),” she said. “I learned my lesson.”

Robert Reneau, 86, a retired mental health consultant who worked for the state of Wisconsin, voted for Evers and was optimistic that he could beat Walker.

“I think if the people understand what has taken place under Walker and the things he’s done … (Evers) may be able to overcome Walker,” said Reneau, of Madison.

Republicans have portrayed Evers as a bureaucrat who wasn’t aggressive enough in revoking licenses from teachers accused of wrongdoing in the classroom. The new Wisconsin Republican Party attack ad accused Evers of not keeping children safe.

Evers has worked with Walker on some education issues in the past, even praising his most recent state budget as “kid friendly.” But Evers also signed the petition to recall Walker in 2012 in the fight over collective bargaining rights for teachers and other public workers.

Walker has built up a big financial advantage for his re-election bid, and run more than a dozen television ads touting his record of the past eight years. The Democratic Governors Association, fearful that whoever won the primary would emerge broke, has been working to shore up funds and other support that the nominee can access immediately.

Evers said the transition to the general election was already underway and he expected millions of dollars to pour in.

In the Senate race, both Nicholson and Vukmir were staunch backers of Trump, but the president did not endorse anyone.

Vukmir won the Republican Party endorsement, while Nicholson had at least $10 million spent by outside groups to benefit him and attack Vukmir in the race. She had just $1.5 million.

Baldwin said in a statement that Vukmir was “bought and paid for” and that voters want someone who will stand up to special interests.

Two GOP megadonors who are divided in the primary, Vukmir backer Diane Hendricks and Nicholson supporter Richard Uihlein, have scheduled a unity fundraiser on Friday, a strong signal that Republicans plan to unite behind Vukmir.

“We have to unify the party,” Vukmir said. “I hope that we do come together otherwise we will end up with Tammy Baldwin.”

In the race to replace retiring House Speaker Paul Ryan , one of his former aides, Bryan Steil, won the GOP primary. On the Democratic side, union ironworker Randy Bryce, who goes by the nickname of “Iron Stache,” won.

The southeast Wisconsin district leans Republican, but Democrats were optimistic they could pick up the seat that Ryan has held for 20 years.