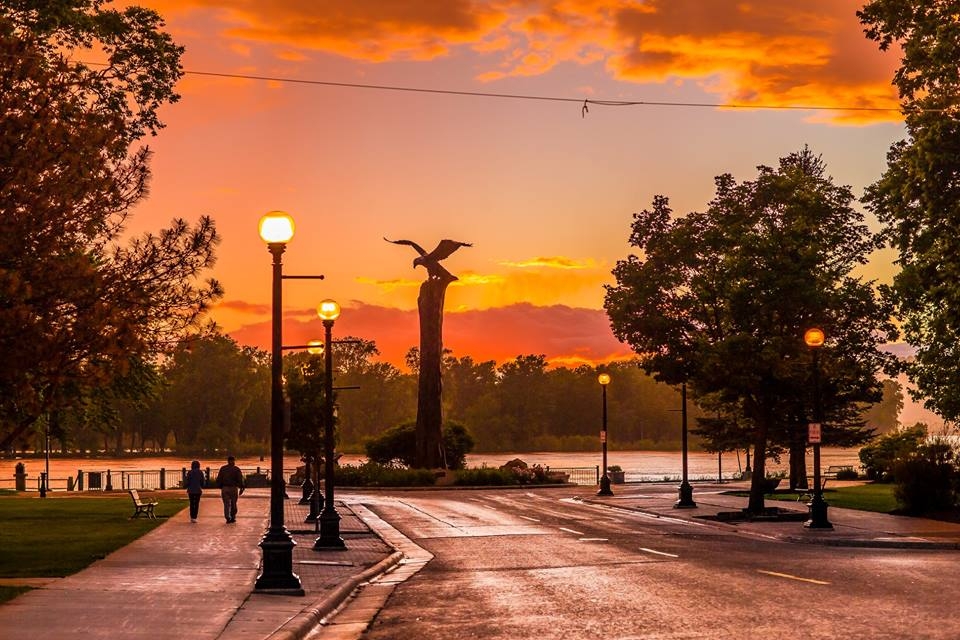 One La Crosse park recently got a new swingset, in an effort to keep people from drinking on that block.

Another change to Burns Park on Main Street could happen soon.

A large brown abstract sculpture at Burns, called Lyra could get a new coat of paint.

Barry McKnight from the city park board identified Lyra as one of the public artworks in La Crosse which needs maintenance. He says you can easily see the original blue paint beneath the brown.

“It’s been brown for a number of years,” McKnight said. “The color brown, it’s the same color as the surround trees so really the sculpture sort of disappears in the foliage of that park. Many people who drive by probably don’t even realize it is there.”

Lyra was located in Valley View Mall when the mall opened in 1980 and was moved to Burns Park a few years later.

Other artwork needing repair in the city are the Eagle at Riverside Park and the Dancers at the Pump House.

With 19 more big paddlewheel visits through mid-October coming to La Crosse, one of the first things people see on the riverfront would be that Eagle sculpture, and the Hiawatha statue.

Just part of a long list of art needing maintenance.

“Some of the ones that are in kind of the most visible parts of our parks or the parts that are visited most by tourists to the city, some of those pieces really need some work,” McKnight said.

The eagle sculpture is not in danger of falling down, according to McKnight, but there’s corrosion on its pedestal.

As for the Hiawatha statue, there still hasn’t been a decision on whether it’s moved from downtown or not, but it, too, could need another paint job.

The pedestal that Hiawatha stands on is crumbling, as is the concrete pedestal for the Dancers sculpture.

As for moving Hiawatha, city council Member Gary Padesky says that push to get it out of Riverside Park is because of a perceived racial stereotype, in part because that side is the side that is speaking out.

“Are these same people approaching the Ho-Chunk nation saying, ‘We have no problem, leave it alone.’?” Padesky said. “You have the people that don’t like it, they’ll storm Facebook or the media, whatever.”

Padesky says it’s going to happen, due also in part to the family growing tired of the fight.

“I don’t think we’ll ever find a compromise in Riverside Park,” Padesky said. “Their feeling is, even if we win this time, that would be the third time, and we feel will be the last time. The family and different people, like myself, just won’t be around to defend it.”

Discussion at a city arts board meeting Friday included a suggestion of moving the statue to a property in Caledonia.