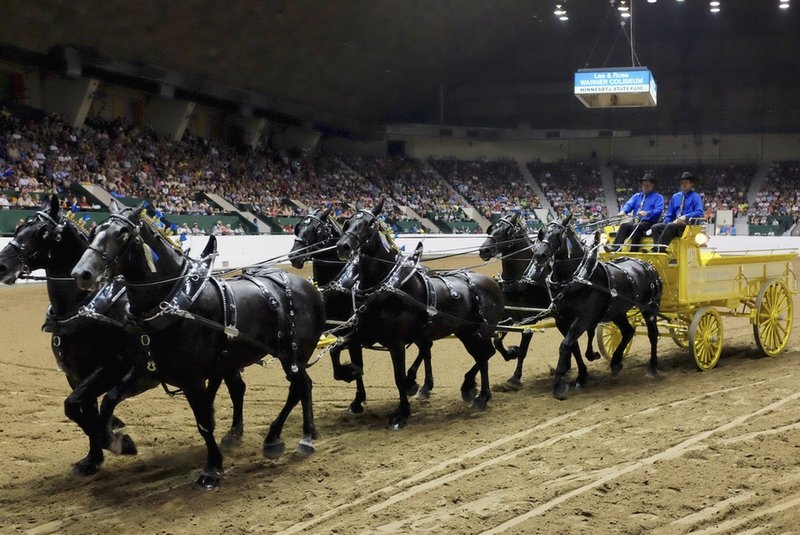 MINNEAPOLIS (AP) — The Minnesota State Fair announced dozens of new attractions Wednesday for the 2018 edition of the Great Minnesota Get-Together.

Thrill-seekers will find seven new rides, including five on the Mighty Midway. They include the Haunted Castle Dark Ride, a two-level haunted house from Italy that fair officials say will be the largest traveling haunted attraction in North America when it debuts at the fair.

And it might be best to hold off on all the traditional fried and sugary fair food before braving the Super Frisbee, which officials promise will be “nothing short of spectacular.” The 52-foor-high gondola rotates at 20 revolutions per minute and free falls at a stomach-churning 3.5 times the force of gravity.

For the less adventuresome, there will be a new carousel at Kidway and a teacup ride that officials promise will be calm.

The old demonstration kitchen in the Creative Activities building has been transformed into the state-of-the-art Cambria Kitchen, where a full schedule of local chefs and demonstrators will include Andrew Zimmern of “Bizarre Foods” fame and Sean Sherman & The Sioux Chef’s Indigenous Food Lab, with a fresh take on Native American cuisine.

Also for foodies, the former Pet Center on the north side of the fairgrounds has been transformed into The Hangar, a new destination for food, craft beer and entertainment. The name reflects a return to the building’s roots in the early 1900s as home to the fair’s aircraft show, and it will feature aviation-themed decor and memorabilia. Smoked turkey, smoked brisket, bacon-wrapped pork belly and chicken-and-waffle ice cream splits topped with candied bacon are on the menu. The Minnesota Craft Brewers Guild will curate a selection of local beers to wash it all down.

The Minnesota Farmers Union has renovated its 1950s-era coffee shop, which gives fairgoers new opportunities to learn about the state’s family farmers, the importance of agriculture to the state’s economy and the value of locally grown food.

Fair officials earlier announced that there will be 27 new foods , including giant stuffed tater tots and smoked ice cream.

For animal lovers, there will be an expanded equestrian program with more draft and miniature horse competitions. Highlights of the livestock shows will include several cattle breeds — Charolais, Hereford, Holstein, red and white, and shorthorn and shorthorn plus — as well as dairy goats and sheep.

A freshened up Eco Experience — a partnership involving the fair, the Minnesota Pollution Control Agency and other organizations and businesses — will offer an array of new highlights for environmentally focused living. They’ll include new presentations on recycling, healthy cooking to reduce food waste and innovations in green technology.

National touring exhibits stopping at the fair this year will include the Experimental Aircraft Association’s Spirit of Aviation. It includes a 360-degree virtual reality video experience and a chance to take the controls of a flight simulator for a spot landing challenge.

The Grandstand lineup announced earlier includes a mix of old and new music, including Sugarland; Trampled by Turtles; Earth, Wind & Fire; The Beach Boys with The Righteous Brothers; Jason Mraz; and Boy George and Culture Club with the B-52s.