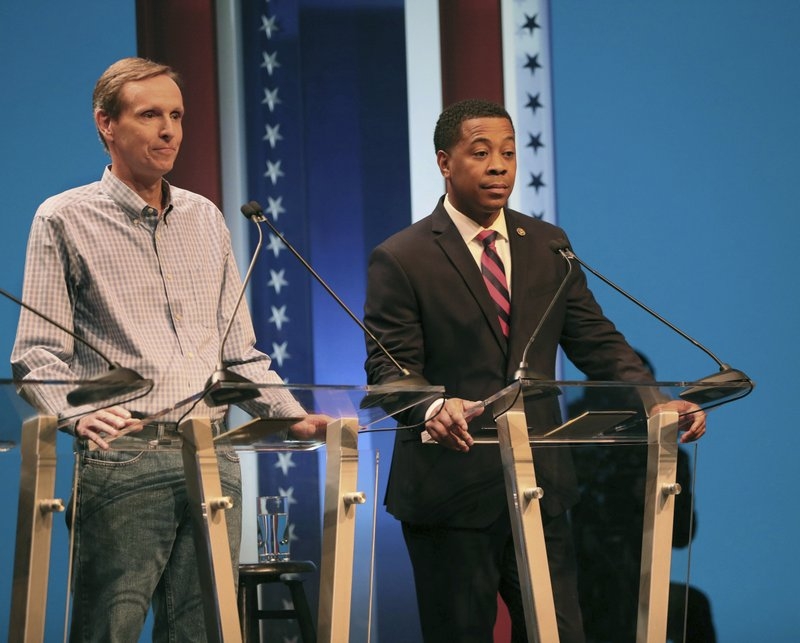 MILWAUKEE (AP) — The eight Democratic candidates for governor were united Thursday during their first broadcast debate against a pair of common enemies — the Foxconn Technology Group project in southeast Wisconsin and Republican Gov. Scott Walker.

The debate, less than five weeks before the Aug. 14 primary, gave the candidates a chance to distinguish themselves and make a mark with voters, many of whom polls show remain undecided.

Here are takeaways from the debate held at the University of Wisconsin-Milwaukee.

All eight candidates said they were opposed to the project that could mean up to a $10 billion investment in the state and 13,000 jobs. Their opposition largely turns on the potential $4.5 billion in taxpayer incentives for Foxconn, the Taiwan-based global electronics giant.

However, Evers and Pade were the only two who said they would not try to kill the deal as governor. Evers said he would renegotiate it to make it more beneficial to taxpayers.

The candidates avoided attacking one another and instead remained largely focused on Walker.

Soglin, when referring to the Foxconn deal, said, “The governor does not know what he is doing. We would like to know what he was smoking when he negotiated this deal. They’re laughing at us in China.”

Mitchell said Walker’s handling of the state’s troubled juvenile prison shows that he “doesn’t give a crap about the people of Wisconsin.” Flynn said he was the only candidate with the ability to “dismantle” and “eviscerate” Walker.

Mitchell quipped that one thing he and Walker have in common: “We have great hair.” The moderator was actually referring to the fact they both graduated from the same high school in Delavan.

The only African-American candidate, Mitchell referenced the state’s high incarceration rate for black people, saying “It doesn’t escape me I’m raising two black kids in the worst state to do so.”

Roys, a vocal abortion rights advocate, spoke about her pledge to pardon anyone who is charged with a crime should Roe v. Wade be overturned by the U.S. Supreme Court.

“We are not going to let our daughters go back to a time when abortion was illegal and they could not get the health care they need,” Roys said. She added that voters were excited about the chance to make her the first women governor in Wisconsin history.

Evers noted he’s the only candidate among the eight who has won a statewide election — he’s done it three times.

Vinehout, touting her experience as a state senator since 2007, said she was the most experienced and prepared to replace Walker.

Flynn again had to defend his past work defending the Milwaukee Archdiocese against priest abuse lawsuits. Two Democratic state lawmakers and others have called for Flynn to drop out of the race because of that work. Flynn, noting that he’s the only veteran in the race, derided the lawmakers as “two drive-by artists in Madison” and accused them of “fragging” the leading officer from behind.

Flynn touted his plan to legalize marijuana, something several of the candidates support but only he was able to bring up in the debate.

All of the candidates, except Evers, said they supported free tuition for all two-year public colleges in the state. McCabe, an advocate for campaign finance reform, noted that he’s not taking any single donation larger than $200.

They all spoke in support of reducing the state prison population through a variety of criminal justice reforms, a position that Republican Attorney General Brad Schimel criticized this week as dangerous.

At one point, candidates standing next to one another were able to ask the other one a question. Mitchell used that opportunity to ask McCabe what his favorite beer was. It’s Spotted Cow, from the New Glarus Brewing Company.