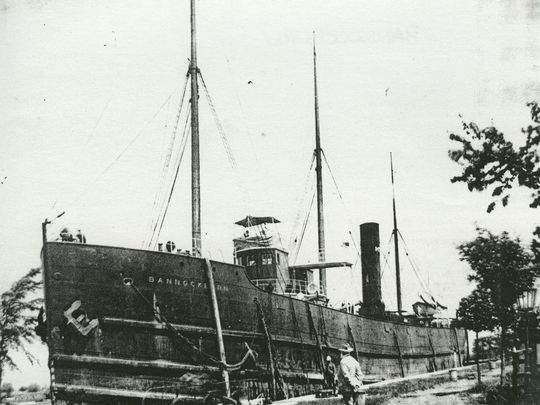 Not for actual treasure, as the ships that met their fates on the Great Lakes weren’t known to carry gold, valuable coins or jewels.

The prizes are the shipwrecks themselves.

Of the estimated 10,000 ships believed to have been lost on the lakes over the past four centuries, only about a third have been found and identified.

Amateur and experienced shipwreck hunters hit the water every year as soon as the weather warms, eager to make a new discovery and unearth a piece of the past.

“There’s still some real mysteries out there,” said David Trotter, a renowned shipwreck hunter who has found about 100 lost ships.

The cold, fresh water of the Great Lakes means wrecks are typically better preserved there than in the oceans. Advances in sonar and positioning technology have led to a surge in discoveries in recent years.

Still, a number of famous vessels remain missing — for now.

Here are the stories behind some of the most unique and sought-after undiscovered wrecks in the Great Lakes.

The Griffon is iconic among shipwreck hunters, who often refer to it as the Holy Grail.

Built by French explorer Rene-Robert Cavelier, Sieur de La Salle, the ship was the first European vessel ever to sail on the upper Great Lakes. It disappeared during its maiden voyage in 1679 after picking up animal furs in Wisconsin.

The Griffon’s age and elusiveness have contributed to its mystique.

“There have been many, many dozens of alleged Griffon discoveries over the years, none of which have been substantiated,” said Wayne Lusardi, maritime archaeologist for the State of Michigan.

Lusardi told the Detroit Free Press that the Griffon, which had huge sails and bronze cannons, likely encountered a storm and sank either in Lake Michigan or Lake Huron. Some people believe that artifacts and skeletons discovered in the late 1800s on the Canadian side of Lake Huron may have been the remnants of the Griffon and its crew.

The propeller-driven bulk freighter Bannockburn went missing with 20 sailors in Lake Superior during a November 1902 storm.

Bits of wreckage — hatch covers and parts of a cabin, according to an old Detroit Free Press article — later were found floating in the middle of the lake.

“As the waters of Lake Superior reach their greatest depth at that point it is probable that none of the bodies will ever be recovered. Lake Superior never gives up its dead,” the Free Press reported on Dec. 2, 1902.

Legend says the Bannockburn, sometimes nicknamed the Flying Dutchman of the Great Lakes, lives on as a ghost ship that has been spotted many times since its disappearance still prowling the water.

In October 1871, the nearly 200-foot, propeller-powered R.G. Coburn was on Lake Huron carrying wheat, flour and barrels of silver ore when it encountered a horrific storm.

It lost its rudder off Thunder Bay. The un-steerable ship was at the mercy of Mother Nature.

“She fell into the trough of raging seas and began to roll heavily, breaking loose the heavy barrels of silver ore,” Trotter said. “The barrels rolled against the side of the hull, smashing holes in the side of the ship.”

With water coming on, the crew began pitching cargo.

A survivor recounted in a Detroit Free Press article that people stayed remarkably calm amid the chaos. He praised the few women on board, saying he “did not hear a scream from one of them, even when the craft settled down to her grave.”

Some people made it out on lifeboats, but about 45 died, Trotter said.

The ship’s final resting place — and whether it still has any silver on board — remains a mystery. Trotter said it’s possible that some of the silver thrown overboard is scattered in a trail on the lake bottom.

“I’d love to find the Coburn to see if there’s any left,” he said.

The passenger and cargo-carrying Chicora already had been tied up for the winter in early 1895 when its owners were asked to move a shipment of flour across Lake Michigan.

The Jan. 20 trip from St. Joseph, Michigan, to Milwaukee went smoothly. Early the next morning, the Chicora left Milwaukee to return home, departing about 10 minutes before a messenger boy arrived at the dock with an urgent telegraph. The message warned Capt. Edward Stines not to set sail because the barometer was falling fast at Benton Harbor. But it was too late.

The vessel disappeared. All 25 people aboard were lost. No bodies were ever found.

“It’s extremely hard when everybody dies (to know where a ship went down), because you have no clues. You have no survivor accounts,” said Valerie Van Heest, an avid underwater explorer, author and director of the Michigan Shipwreck Research Association.

Adding to the mystery were messages that washed ashore weeks later.

On April 14, a bottle was found with the message: “All is lost, could see land if not snowed and blowed. Engine give out, drifting to shore in ice. Captain and clerk are swept off. We have a hard time of it. 10:15 o’clock.”

A week later, a jar washed up in Illinois with a note that read, “Chicora engines broke. Drifted into trough of sea. We have lost all hope. She has gone to pieces. Good bye. McClure, Engineer.”

A trio of French-commissioned minesweepers — the Inkerman, Cerisoles and Sebastopol — embarked on their maiden voyage in November 1918.

Built in Ontario, Canada, the ships were supposed to sail to Europe to clear mines that were placed in harbors during World War I.

“Three of them left Thunder Bay (in Ontario), headed toward St. Marys River at Sault Ste. Marie, and only one of them made it,” Lusardi said.

The Inkerman and Cerisoles got separated from the Sebastopol in a storm and disappeared. They took with them 76 people, most of whom were members of the French navy.

The Water Witch’s unique, experimental propulsion system may have been its doom.

The ship’s engine was positioned sideways so it could power a propeller rather than a sidewheel paddle mechanism, said Great Lakes historian and artist Robert McGreevy.

The Water Witch was the fastest propeller ship on the Great Lakes — but it had a vibration problem, McGreevy said. He said the vessel was on Lake Huron in 1863 when it “shook itself apart on the middle of the lake.”

“The vibrations caused the stern timbers to open up, and it allowed the ice-cold lake water to hit the red-hot boilers, and it exploded,” McGreevy said. “There was a ship that was following it, and it saw it disappear. But they didn’t know it exploded until (they) retrieved some of the timbers in the lake. They could tell from the doors that it blew out from the inside.”

Was the Hippocampus felled by fruit? The ship was loaded with peaches when it left the St. Joseph/Benton Harbor area bound for Chicago in September 1868.

With a massive crop of peaches in Berrien County that year, Capt. Henry M. Brown felt pressure to carry as much fruit as possible on the voyage, according to the Michigan Shipwreck Research Association. Boxes of peaches were even stacked up on the deck.

The Detroit Free Press reported that the vessel, which also carried passengers and a full crew, touched bottom multiple times as it left shore with the aid of a tug.

Several miles into the lake, the Hippocampus became harder to control amid high winds and swelling waters. Brown ordered the fruit thrown overboard. But before the ship could be stabilized, it rolled on its side and started to sink, according to the Shipwreck Research Association.

Nine passengers and 17 crewmen were lost, the Detroit Free Press reported. Fifteen survivors saved themselves by clinging to broken-off pieces of the ship’s upper works.