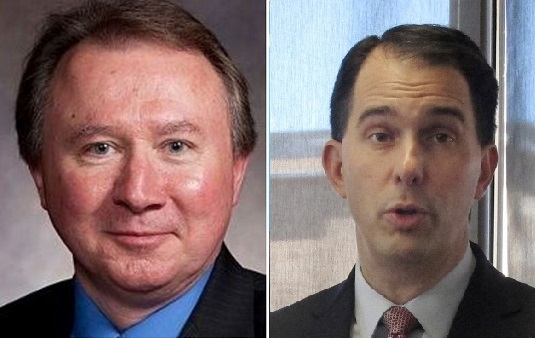 The fight over road funding in Wisconsin seem like it’s turning into an election issue for this fall.

And maybe it should, says Onalaska state rep. Steve Doyle, because the lack of state help to local governments to fix roads has created some chronically bad road situations.

“My office on Ferry Street in La Crosse, I look out at my front doors there and that block is just horrible,” Doyle said. “It’s like driving through a third-world country just to get to my office.”

Walker shocked many observers this week when he failed to even mention transportation funding at the GOP state convention.

Walker followed that up Monday, directing his agencies to come up with new budgets with no spending increases, including for transportation. And that’s the opposite of what has been recommended unanimously by a special commission put together by Walker himself.

“It’s nice to pose for holy pictures and say, ‘We’re cutting taxes,’ but then, the people at the local level are the ones that look like the devil because their roads are going to pot,” Doyle said.

Walker’s no new road-funding stance is in direct contrast with what key state lawmakers in his own party have called for.

Doyle wonders just how bad the roads have to get before the state recognizes the need to take some kind of action to help fund repairs for cities like La Crosse.

“The streets in La Crosse are just as worthy of being fixed as the streets anywhere else,” Doye said. “We need to, at the state level, to step and accept that type of responsibility.”