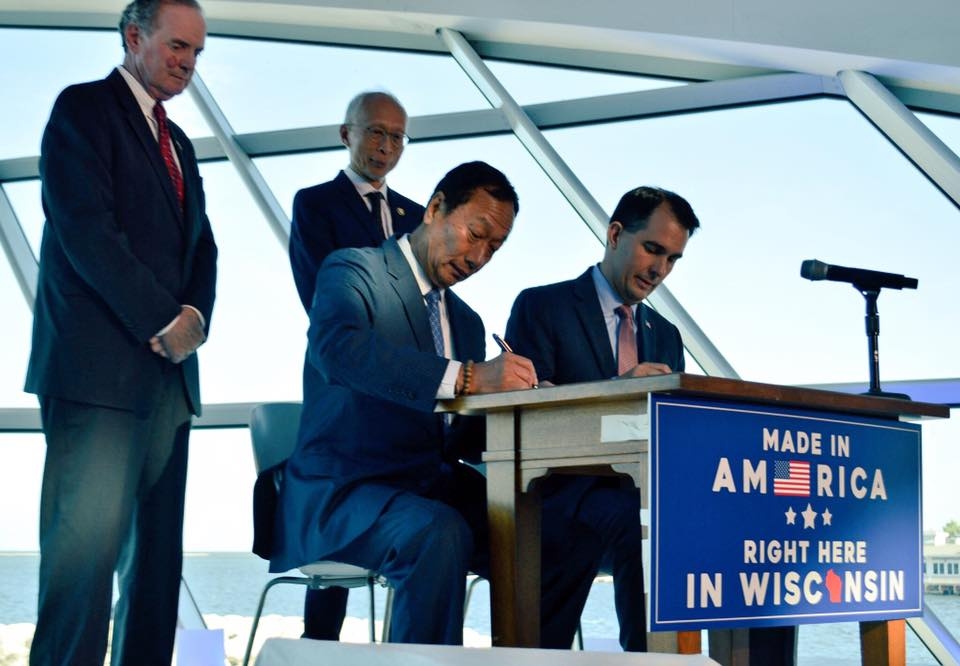 The city of Racine filed a request with the DNR in January to withdraw 7 million gallons of water daily from the lake to serve the plant. The city’s application estimated about 2.7 million gallons will be consumed daily by plant operations and evaporation. The rest will be treated and returned to the lake.

This, a day after the DNR approved four air permits for Foxconn, despite objections that the massive plant will increase smog emissions.

The Lake Michigan application also drew fierce opposition from conservationists. They argued Foxconn has a poor environmental record in China and Japan and pulling water from the lake for a corporation would violate a Great Lakes Compact requirement that such withdrawals be done for public uses, not privately owned companies.

The situation is being closely watched in part because Foxconn’s plant will be in Mount Pleasant, which is situated in both the Lake Michigan and Mississippi River basins. The DNR is responsible for approving water diversions for communities that straddle the two basins.

Environmental group Clean Wisconsin said in a news release that the withdrawal clearly won’t be used for public purposes and the organization was weighing its options. Spokesman Jonathan Drewsen said that could include filing a lawsuit.

“This diversion is an unprecedented betrayal of the Great Lakes Compact,” Wisconsin League of Conservation Voters Executive Director Kerry Schumann said in a statement.

The Great Lakes Compact is an agreement between the Great Lakes states, Ontario and Quebec that prohibits diverting water from the lakes’ basin. However, communities such as Mount Pleasant that straddle the basin boundary can withdraw Great Lakes water for public use. Municipalities such as Racine that supply straddling communities with water can make a withdrawal request on behalf of those communities.

“The (Foxconn) developers chose Mount Pleasant because it is a straddling community, which allows them to avoid scrutiny by Great Lakes states and Canadian provinces,” Schumann said. “Those states and provinces designed the compact to protect that water from raids just like this one.”

The air and water approvals were expected because Gov. Scott Walker has made the $10 billion facility a top priority. The company is receiving about $4 billion in assistance from state and local taxpayers, with most of the money coming from an incentive package negotiated by Walker.

DNR officials said in a news release that part of the withdrawal would serve residential customers in Mount Pleasant, satisfying the public use requirement.

According to the DNR, 9.6 billion gallons of water were withdrawn from Lake Michigan in 2016.

“Racine’s requested 7 million gallons per day withdrawal would only amount to a 0.07 percent increase in the total surface water withdrawals from Lake Michigan,” the agency stated.

Local leaders praised the DNR’s decision, as well. Mount Pleasant Village President David DeGroot said the withdrawal will provide clean, safe water to the Foxconn plant and the thousands of workers it’s expected to employ. Racine Mayor Cory Mason, who helped pass the compact through the Wisconsin Legislature as a Democratic member of the state assembly, said he believes the application meets the compact standards. He pledged to ensure Foxconn meets or exceeds every federal, state and local water standards.